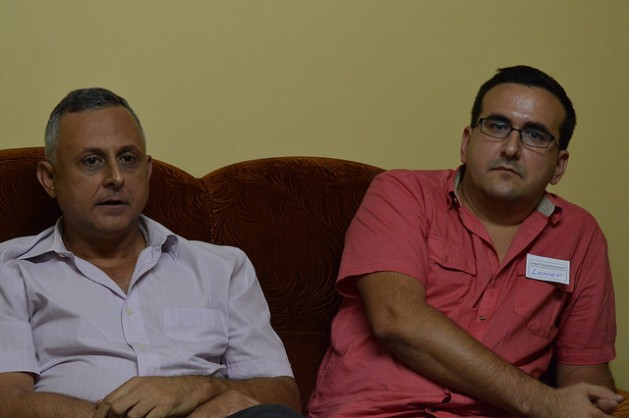 Roberto Veiga (left) and Lenier González, the heads of the Cuba Posible project, during a meeting at the Christian Centre for Reflection and Dialogue, in Cárdenas, Cuba. Credit: Helen Hernández Hormilla/IPS

HAVANA, Dec 30 2014 (IPS) - The normalisation of relations between Cuba and the United States opens up a new path of “readjustments not free of risks”, which forms part of the process of “national transformation” ushered in by Raúl Castro, said Lenier González, one of the creators of the citizen initiative Cuba Posible.

In his view, the Cuban president and his U.S. counterpart Barack Obama will begin to build a bilateral relationship under fire from those who see the step taken by the two leaders as a betrayal. “Cuba and the United States will test their political capacity to work things out and face the present with pragmatism and, also, creativity,” he said.

González and Roberto Veiga, the general coordinator of Cuba Posible, conversed with IPS about the foreseeable political and social impacts on this Caribbean island nation of the end of over five decades of conflict and the search for normal ties between two countries which, at least in the short term, will remain at opposite ends of the ideological spectrum.

The Cuba Posible project is an ecumenical initiative founded by the lay Catholics González and Veiga, along with a group of other Cuban intellectuals, including a few Marxists.

It was conceived of as a space for fomenting and integrating different points of view and a robust dialogue among different social sectors in the country, as well as varying currents of thought among Cubans at home or abroad.

The reestablishment of relations between Cuba and the United States, announced by Castro and Obama on Dec. 17, opens up a new stage in which Cuba Posible will offer a place and resources for Cubans and foreign nationals committed to progress in Cuba to engage in dialogue and implement proposals aimed at improving things in the country, said Veiga.

For Veiga, 50, whose academic background is in law, the simultaneous announcement by Washington and Havana “means the biggest knot that has cut off any chance for broad, intense and steady development in Cuba is being untied.”

“Now we have to get the authorities, politicians, business community and societies of both countries to set off on this route….Both countries would benefit, but especially Cuba, which could strengthen its economy and social dynamics while achieving balance and creating conditions to even reform the political model,” he said.

González, a 33-year-old social communicator, said “the Cuban government will be in a position to gradually facilitate adjustments of how things are in Cuba,” but only if both governments achieve stable relations and the United States abstains from meddling in Cuba’s internal matters.

“Raúl Castro has used all of the authority of his position to convince the country’s political leadership that the transformation of the Cuban model is a matter of life and death,” he said. “The step now taken with respect to the United States will form a major part of this path of national transformation promoted by him, and from which there is no going back.”

Castro, who took over from his brother Fidel in 2008, is also leading the process of establishing the future leadership of the country, by means of the gradual transfer to the new generations of the main leadership positions – a process that should be completed in 2018, at the end of his second five-year term, when he is to step down as president at the age of 86.

With respect to this, González said “in conditions of peace, this renewal of Cuba’s political leadership will give rise to a greater capacity and balance to address the two big future challenges that Cuba is facing.”

He said these are “the reformulation of an internal political consensus regarding the historical goals of the nation – national Independence, social justice and political democratisation – and the adoption of a set of mechanisms that would make it possible to legitimate the renewal of the political leadership to create the conditions for it to lead this process and win a place in Cuba’s future.”

“The renewal of Cuba’s political leadership faces the challenge of unleashing depolarising dynamics which make it possible to seek synergies and negotiations with groups of Cubans with different ideologies, in and outside the island, but committed to these historical goals. We need to build institutions capable of processing pluralism,” he added.

González said this new scenario is finding a transformed civil society, where “the unyielding dichotomy is dissolving between revolutionaries and counterrevolutionaries, according to which the streets belonged to the revolutionaries and anyone who was unhappy or in opposition was not allowed to go out and publicly demonstrate against the government.”

As an example, he noted that in the last few years “the streets” have also been open to religious communities, which have held mass demonstrations and events around the country, to the LGBT (lesbian, gay, bisexual and transgender) movement, and to activists for the rights of Afro-descendants, who celebrate their most important dates in public events.

“These civil society groups have had to overcome mistrust in official circles in order to gradually gain legitimacy and access to the public sphere….they have progressively been able to consolidate their victory,” since Raúl Castro took over the presidency, González said.

“These ‘non-dissident’ sectors want to transform the country, not overthrow the government,” he said.

González and Veiga concur that in the face of this new social reality, a new “heterodox and flexible” Law on Associations is needed, which could give rise to a “regeneration of civil society groups close to the government and the necessary institutionalisation of those that are tolerated,” which without being in the opposition are nevertheless independent.

“In a context of an easing of tension with the United States, the Cuban government has the moral and political imperative to become a guarantor of political and ideological pluralism in the country,” said González, who believes it will take “a lot of work” for opposition civil society groups to insert themselves in this new reality in Cuba.

The current law in effect since 1986 allows the creation of scientific, technical, cultural, artistic, sports, religious, friendship and solidarity associations and others “for purposes of social interest.” But it does not permit the registration of activities “that could hurt the social interest” or the creation of a new group when another association with the same objectives already exists.

Cuba Posible is a citizen initiative taken up by the ecumenical Christian Centre for Reflection and Dialogue (CCRD-C), based in the city of Cárdenas, 150 km east of Havana. It has the financial support of the Department of Development and Environment of the University of Oslo, in Norway.

It promotes debates through seminars, workshops and meetings of different formats, and the social networks. It also hopes to set up working groups on issues that include reconciliation and the normalisation of Cuba’s relations with the United States and the European Union.