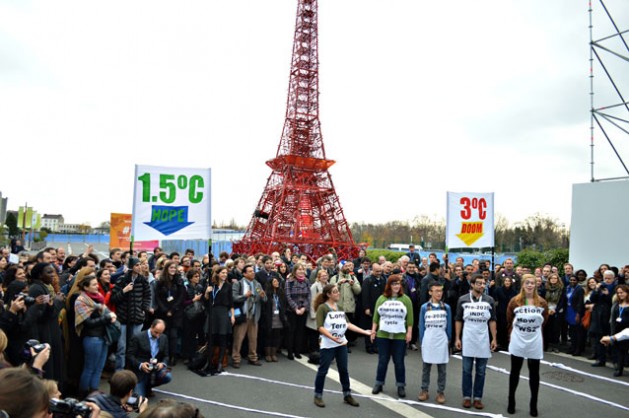 According to the Paris Agreement, the world will pursuit a 1.5C global temperature rise target, a recent addition propelled by the civil society and key players like the Climate Vulnerable Forum. This action on Thursday afternoon pushed for this goal. Credit: Diego Arguedas Ortiz/IPS

PARÍS, Dec 13 2015 (IPS) - The impossible was made possible. Governments from 195 countries around the world emerged here with the first universal agreement to cut greenhouse gases emissions and reduce the negative impacts of climate change.

After two weeks’ worth of intense negotiations at the 2015 Conference of the Parties (COP21) to the United Nations Framework Convention on Climate Change, diplomats and ministers cheered the Paris Agreement as completion of a four-year long process with many checkpoints.

A French-woven process managed to avoid the fate of the failed 2009 climate summit, the last time such an ambitious agreement was attempted, and delivered a robust treaty that includes everything from financial obligations and the respect of human rights and ecosystems’ integrity.

“It is my deep conviction that we have come up with an ambitious and balanced agreement. Today it is a moment of truth,” said French Foreign Affairs Minister Laurent Fabius, who chaired the summit over the two weeks.

After almost two hours in the Plenary Room and a quiet discussion over the choice of a verb in a critical article in the agreement (a “shall” instead of a “should”), Fabius was finally able to line-up delegates in their positions and pick up the thematic COP21 gavel: “It is a small gavel but I think it can do a great job.”

If ratified by the now signing parties, it would be the first globally legal agreement tasking every nation with addressing climate change. It will succeed the Kyoto Protocol which is now an obsolete treaty that never lived to its expectations and only charged developed countries with responsibility.

The resulting science-advised agreement managed to gather support from all the negotiating groups in the UN Climate Convention, from the bloc of small insular states to the alliance of industrialized nations.

“The text is not perfect but it is a good foundation for climate action,” declared the South African Minister of Water and Environmental Affairs, Edna Molewa, after the ovation following its approval.

“This is a first step of a long journey,” concluded the minister, the first among those who spoke during the closing plenary.

Many of the delegates who took the floor during the night recalled the need for fuelling the Agreement’s implementation during the forthcoming years, specially at 2016’s climate summit to be held in Marrakech, Morocco.

Through this deal, the world agrees to limit the increase in global temperature to “well below 2C” and in pursuit of 1.5C, a target that might save the world’s most vulnerable countries, particularly atoll nations in the Pacific, Indian and Caribbean.

It also grants 100 billion dollars a year from developed countries after 2020, formalizes a mechanism established two years ago to address irreparable damage caused by climate change and defined a long term goal, which was defined as the balance between emissions and carbon sinks, something between 2050 and 2100.

The agreement came after two weeks of intense talks in the massive conference center at Le Bourget, in the outskirts of Paris, lead in the indaba format used for the Durban Climate Talks in 2011 which began the road for the Paris Agreement.

“Despite diversity and divergence, we have found common ground.” said Emmanuel M. de Guzman, Climate Change Commissioner and head delegate for the Philippines.

The negotiator stated that the summit “has given us 1.5 to survive and thrive. It’s now up to us all to bring that vision into reality,” through national actions and international cooperation.

Once again, the Philippines was among the leading voices during the climate talks, this time leading the charge with the Climate Vulnerable Forum, a self-defined “leadership group” of 33 countries that didn’t take part in negotiations but pressed hard on topics like the 1.5C goal.

“And now as one family of nations – as sisters and brothers of one world – we can move forward with greater resolve and ambition, hopeful of winning the fight against climate change. We may be vulnerable but we are also capable when we work together,” argued de Guzman.

Earlier on Saturday, Fabius had presented parties with what he considered to be a bridging proposal of the agreement, the fifth in the last two months alone. This was the agreed text countries signed in on Saturday.

The Agreement was acknowledged as a positive outcome by the majority of civil society observers, a signal of the growing transition from a fossil fuel dependent 20th century to a new economy based on renewable and green energy.

“The agreement’s temperature goal, net zero emissions objective, and processes to steadily increase the ambition of national emissions reduction commitments combine to send a clear message to the fossil fuel industry: after decades of deception and denial, your efforts to block action on climate change are no longer working.” said through a statement Alden Meyer Director of Policy and Strategy, Union of Concerned Scientists.

Many activists and even the UN Secretary General, Ban Ki-Moon, said they hoped the approval of the agreement would send a strong signal to private markets working in energy-related sectors to drop fossil fuels and invest in renewables.

Another major victory for sectors of civil society and international leaders like the former Irish President Mary Robinson was the inclusion of human rights and gender as a driving element for the Agreement.

After pushback from Arab countries like Saudi Arabia and developed nations such as the United States and Norway, the support of key players like Mexico, the Philippines and other Latin American emerging economies helped to keep their mention in the text.

Yet, experts were fast to acknowledge this was but one step in the urgently needed transition to a cleaner and more resilient economies.

“All countries have agreed upon the pathway to phase out all fossil fuels, but failed to make headway towards this common goal. This is why the hard work needs to continue after the summit”, said Wendel Trio, Director of Climate Action Network Europe.