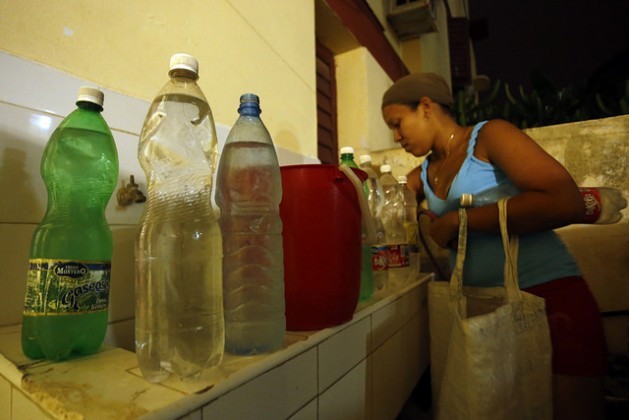 A resident of the East Havana municipality arranges the containers of drinking water that she has brought home, after days without piped water in her home in the Cuban capital. Fetching water for household use has been added to the day-to-day tasks of women in Havana. Credit: Jorge Luis Baños/IPS

HAVANA, Dec 2 2015 (IPS) - Denia Arrascaeta suffers water shortages on a near daily basis in the neighbourhood in the Cuban capital where she lives. “Sometimes I don’t even have water to drink,” she told IPS.

At her grandmother’s house, the water supply is more regular, so when the shortage becomes acute, she fills several big bottles and carries them the eight blocks to her home.

The 39-year-old accountant lives in a neighbourhood on the west side of Havana, where the water supply is more erratic.

“Occasionally, my grandmother’s tap also goes dry, and we have to wait for the ‘pipa’,” she said, referring to the tanker trucks that provide water to the neighbourhoods that are not connected to the grid.

“Household tasks take longer, and the women arrive late at work, which generates problems due to incomprehension. It’s a chain of things that are affected in their personal lives, with a heavy impact on their physical and mental health.” -- Reina Fleitas

Arrascaeta said the worst thing is the constant stress due to this problem, which in this Caribbean island nation has structural causes related to the crumbling water treatment and supply infrastructure, and was aggravated this year due to record drought.

In Old Havana, at the heart of the Cuban capital, the situation is no better, says Yaritsa Oliveros, who lives in Jesús María, one of the neighbourhoods in the old city. At the age of 25 she supports her mother and her four-year-old daughter working as a cleaning woman in a municipal government office.

“We go several days without water and suddenly it starts to flow in our building in the early hours of the morning,” she told IPS. “We collect all we can in different containers, because we don’t know when the taps will run again.”

Three years ago her neighbourhood was the focus of an academic study that covered 166 households, home to a combined total of 528 people, 56.1 percent women and girls and 43.9 percent men and boys. Of that sample, 57 percent of the families were headed by a woman, with varying educational levels.

Most of the people surveyed said that every two or three days they had to haul water to their homes. The worst difficulties in terms of access to water and sanitation were experienced in female-headed households.

“My mother complains of back pain, from having to carry so much water,” said Oliveros, who does not know if her home was covered by the survey.

Sociologist Reina Fleitas, a researcher and professor at the psychology department of the University of Havana, told IPS that the study, the only one of its kind carried out so far in Cuba, even reflected problems of domestic violence or violence among neighbours, caused by the tension arising from the water shortages. A man fills containers with water from a tanker truck on a street in Old Havana, in the Cuban capital. Water supply problems in households caused by structural problems in the water grid and severe drought have complicated the lives of people in Havana, and especially those of women. Credit: Jorge Luis Baños/IPS

The survey also confirmed that women shoulder the greatest burden with regard to the administration and use of water, because they organise and reorganise their daily lives around its availability.

“Household tasks take longer, and the women arrive late at work, which generates problems due to incomprehension. It’s a chain of things that are affected in their personal lives, with a heavy impact on their physical and mental health,” Fleitas said.

The latest statistics from Cuba’s National Water Resources Institute (INRH), published in the government-controlled media, indicate that while 73.5 percent of the Cuban population had access to piped water in 2014, a significant number of people were still not connected to the water grid and received water supplies through other channels, such as tanker trucks.

But over 50 percent of the water supply in the grid is lost due to leaky old pipes.

The INRH is in charge of state policies on the water supply, and is currently carrying out a programme aimed at gradually solving the country’s water problems.

“In my neighbourhood the lack of water has been aggravated by the reparations taking place, but at least it gives us some hope that things will get better one day,” said Oliveros. “Although they also say that because of the drought, the shortages will get worse.”

Arrascaeta said that one of her neighbours calls the INRH every time the situation becomes acute, and receives a wide range of excuses. “We don’t believe anyone anymore,” she said.

“Our data from 45 developing countries show that in seven out of 10 households, the burden of collecting water falls to women and girls, so access would also aid gender equity,” Geeta Rao Gupta, deputy executive director of the U.N. children’s agency, UNICEF, said in October. Professor Fleitas said a differentiated approach to the problem should take into account that it is poor women, minorities, and other vulnerable sectors that suffer discrimination who experience the worse impacts of water shortages, a problem that is becoming more acute at a global level.

With respect to water, Fleitas stressed how basic a need it is, especially in the lives of women.

“It defines the organisation of their time; they wash, clean, scrub, prepare food….they are responsible for inculcating in children a culture of hygiene. We lament that is women who must carry the burden of this responsibility, but we must not ignore this when it comes to political decision-making,” she said.

The professor also noted that besides being aggravated by climate change, water shortages are accentuated by the growing number of wars in the world, which destroy infrastructure and contaminate water sources.

“Investment in the arms race is given priority rather than spending on the development of countries that have huge disadvantages when it comes to providing a clean water supply,” she complained.

As an island nation, Cuba depends largely on rainfall for its water supply. But this year has been one of record drought. At the end of the May to October rainy season, the country’s 242 reservoirs held 4.5 billion cubic metres of water, only half of total capacity, which indicates that the shortages will continue.

From November 2014 to October 2015, 68 percent of the national territory was affected by drought. But worst-hit was the western end of the island, a key food production area.