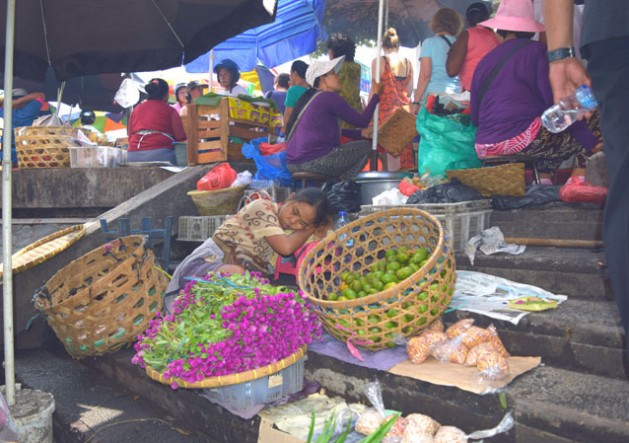 A woman vendor sleeps on the stairs of Bali's biggest traditional market Pasar Badung. Most vendors do not have enough time to take care of their health and wellness, say health experts. Credit: Stella Paul/IPS

BALI, Indonesia, Jan 27 2016 (IPS) - Porter Ngengh Tike is in her late thirties, but looks well over 50. For 8 hours every day, she carries around a large bamboo basket on her head, delivering supplies to local traders in the biggest traditional market of Bali – Pasar Badung. At the end of the week, she earns about 18 dollars – a sum that Tike uses for food, household expenses and her 10- year old son’s education. So, when it comes to seeing a doctor, there is no money, says Tike who suffers from genital infections.

Nyoman Sulastri , another porter and a part time vendor, also finds it difficult to pay for her health needs that include sexually transmitted diseases and contraceptives. Both of these women depend heavily on a clinic run by Yayasan Rama Sesana (YRS) – a local charity.

Located in the vicinity of the market, the clinic especially caters to women vendors and porters who comprise 67 per cent of the market’s total workforce. It offers among others, free check ups and basic treatment for sexually transmitted infections and distributes free condoms.

On Monday, the 4th International Conference on Family Planning – a 3- day conference that brought together over 4,000 health experts, advocates and educators from across the world, started in Bali’s Nusa Dua. At the opening ceremony of the conference, policy makers and donors were unanimous on one issue: for a sustainable future of the world, family planning had to be given more importance and greater investments, so even the poorest could access sexual and reproductive and population healthcare, including family planning.

“Investment in Family Planning is absolutely necessary,” said Joko Widodo -the President of Indonesia who inaugurated the conference. The ICFP, he said, could be a good venue to make a step forward to that. “I wish that at this ICFP, we can discuss the main foundations necessary to build the planet that we want [by 2030], a future that ensures all women and girls are empowered to choose whether and when they want to have children and space their births, so that mothers and their babies have a better opportunities for better lives,” Widodo said

Reminding everyone that the core principle of the Sustainable Development Goals (SDGs) or 2030 agenda was “leaving no one behind,” Ootimehin said, “access to family planning saves and transforms lives. Let’s do that. Let’s transform lives,” Osotimehin urged.

To help narrow the gap, Melinda and Bill Gates Foundation, one of the co-sponsors of the conference and also one of the largest donors to global family planning, announced that it would invest an additional $120 million in the next three years.

In a video message, Melinda Gates of the foundation said that the money would be invested into three specific areas: advocacy, improving the quality of services, especially in contraceptives and also funding global programs that focused on family planning.

However, Osotimehin said that true sustainability could not come only from the funding of the donor organizations and countries had to “step up their efforts” to provide greater family planning. “Family planning is about women’s right and their capacity to take decisions about their health and well-being contributing to the objectives of FP2020,” he said.

Far away from the conference center, a motley crowd of about 50 women and girls sat in the sprawling yard of the Yayasan Rama Sesana clinic. They listened attentively to a group of the charity’s educators who explained the basic functions of reproductive organs, sex, contraceptives, common sexual diseases and sexual hygiene. Most of the women had little or no formal education and so the educators used blackboard, flipcharts, posters of female anatomy and wooden models of male reproductive organs.

According to Tike and Sulastri, these lessons were another reason why they came to the clinic: “I can learn new things …I can hear them talk of other diseases also,” says Tike.

In Bali – one of the most popular tourist destinations in the Asia Pacific – the rate of STDs as well as cervical cancer is ‘alarmingly high’, said Luh Putu Upadisari, founder and head of YRS. “Women in Bali, especially those who work in the market, less education and less time,” Upadisari said.

The combination of all these three, she felt, made the women highly vulnerable to a number of sexual and reproductive diseases: “Many here suffer from severe STIs, cervical cancer and HIV/AIDS.” Her charity, she informed, had served over 21,000 women in past one decade.

According to World Health Organisation (WHO), globally, more than 500 million people are living with genital HSV (herpes) infection. At any point in time, more than 290 million women have a human papillomavirus (HPV) infection – one of the most common STIs.

At present, YRS’s main thrust was on giving out information and educating local women on the STI and family planning issues including contraceptives. The education and the counseling was free, but for the treatment, the charity always asked for a payment. It was mostly an effort to bring a behavioral change, she said.

However, the effort often failed to produce results, revealed Komang Afy – a staff member. “Since they can’t actually pay for the medicines or the check up, we ask them to make a donation. The idea is to help them build a habit where they start saving a little money for their own health and wellness. But most women just don’t have the money, or don’t care enough for their own health,” Afy said.

However, limited fund limited YRS’s ability to provide treatment beyond the basic level.

At the ICFP2016, President Jokowi acknowledged that Indonesia still had many unmet needs, but reiterated his commitment to support local women with greater access to family planning. “We know that the challenges facing Indonesian families in the future will [only] be greater, especially when it comes to population issues… we also encourage local governments to raise awareness and make family planning a priority in every municipality and village across Indonesia,” Jokowi said.