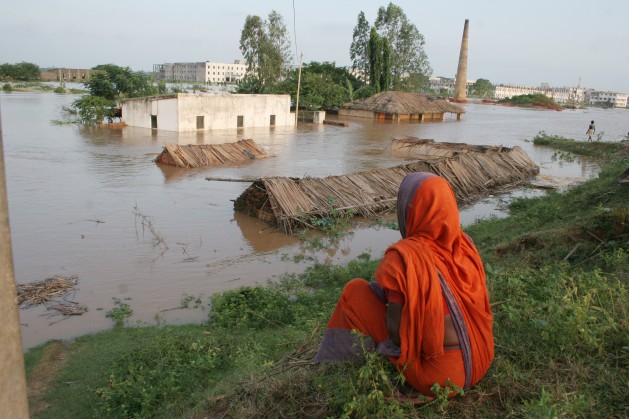 “Predictions are that the emission reduction pledges under the Agreement would lead to rise in temperatures beyond 3 degrees celsius, which would be catastrophic for the world,” Meena Raman told IPS. Credit: Manipadma Jena/IPS.

UNITED NATIONS, Apr 19 2016 (IPS) - Over 150 countries are expected to sign the Paris climate change agreement on April 22 but the historic treaty will not come into force until it has been ratified by 55 countries.

UN Secretary-General Ban Ki-moon, who has hailed the agreement as “a landmark of international cooperation on one of the world’s most complex issues”, is hoping for fast-paced ratifications – perhaps before the end of the year so that it will also be considered as one of his lasting political legacies before he steps down in December.

And he may not be far off the mark.

“Early ratification and entry into force will send a strong signal to Governments, businesses and communities that it is time to fast-track climate action,” Ban said last week.

The real challenge lies ahead, he declared, describing it in a single word:  “Implementation.”

Dr Palitha Kohona, a former Chief of the UN Treaty Section, told IPS although signatories are important, the more significant aspect of any international treaty is ratification – some of them long drawn out because that action has to be taken by domestic legislatures.

The Paris Agreement (PA), he pointed out, will enter into force when 55 countries that produce at least 55 percent of the world’s Greenhouse Gas (GHGs) — “ratify, accede, approve or accept it.”

Signatures alone, even by a large majority, will not bring it in to force, he added. He said there are other treaties with similarly complex entry-in-to force provisions.

The Comprehensive Test Ban Treaty (CTBT), he noted, has still not entered in to force despite having been signed by over one hundred countries on the first day it was opened for signature at a glittering ceremony at the UN headquarters over 20 years ago.

President Clinton was the first to affix his signature on behalf of the US, he said. That treaty has been ratified by 157 countries, but the holdouts include the US, China, Egypt, India, Iran, Israel, North Korea and Pakistan.

“The critical element to entry in to force (of the Paris agreement) will be the key GHG producers. The US, China, Brazil, Russia and the European Union (EU) account for over 75 percent of the world’s GHG emissions and they could provide the main impetus for bringing the agreement in to force”, said Dr Kohona.

Asked if it is realistic to expect the treaty to come into force early, Meena Raman, Legal advisor of the Malaysia-based Third World Network, told IPS: “Well, if the United States and China both ratify early or even this year, then about 40 percent of the global emissions would have been covered but the remaining countries would have to account for the balance of the 15 percent of the emissions and at least 55 countries must have ratified the agreement.”

So it is not completely unrealistic for the early ratification of the agreement before 2020, said Raman, who was been monitoring all of the climate change negotiations as a member of civil society.

However, what is more important to consider, she argued, is the effect of the early ratification and entry into force of the agreement.

It is well known that the aggregate emissions reductions from the existing INDCs that have been communicated by Parties thus far which will translate to their contributions under the Agreement is grossly inadequate to keep temperature rise to well below 2 degree celsius, let alone 1.5 degrees, she said.

“Predictions are that the emission reduction pledges under the Agreement would lead to rise in temperatures beyond 3 degrees celsius, which would be catastrophic for the world.”

So, while the early entry into force of the PA may send some positive signals, the real issue is whether governments, especially in the developed world step up with their emission cuts even more ambitiously now and provide the necessary financial and technology transfer resources to developing countries to also act with urgency in the pre-2020 time frame – and not wait for actions after 2020, as they had agreed under the various decisions of the UNFCCC (UN Framework Convention on Climate Change) and the Kyoto Protocol.

Eliza Northrop, an Associate in the International Climate Initiative at the Washington-based World Resources Institute, told IPS the Paris Agreement, with the required ratifications,  could enter into force in 2017 or even earlier.

It certainly will happen faster than previous comparable agreements, such as the Kyoto Protocol, she pointed out.

“Not only is there greater political momentum behind the Paris Agreement but the conditions for entry into force are different to that of the Kyoto Protocol”.

By contrast, she said, the Paris Agreement takes into account all greenhouse gas emissions from all countries.

“Entry into force will require the support of a broad constituency of countries and broad support for climate action from the largest emitters to the most vulnerable island nations,” Northrop added.

Dr Kohona told IPS the policy of the US would be seminal.

While its past performance in this area of global law making has not been encouraging, and climate sceptics exert a disproportionate amount of influence on US policy making, it is to be hoped that the threat to the very existence of the human race that climate change poses will influence its decision making.

“Any dilution of the leadership provided so far by the US could provide the excuse for others to to lose their enthusiasm”.

The commitment of the administration of President Barack Obama to address the threat of climate change forcefully must remain unabated if the world is to deal with this problem effectively, he declared.

Meanwhile, the provisions of the agreement include reaffirming the goal of limiting global temperature increase well below 2 degrees celsius, while urging efforts to limit the increase to 1.5 degrees.

At the same time, the Paris Agreement calls for establishing binding commitments by all parties to make “nationally determined contributions” (NDCs), and to pursue domestic measures aimed at achieving them; commits all countries to report regularly on their emissions and “progress made in implementing and achieving” their NDCs, and to undergo international review and submit new NDCs every five years, with the clear expectation that they will “represent a progression” beyond previous ones.

Additionally, the agreement reaffirms the binding obligations of developed countries under the UNFCCC (UN Framework Convention on Climate Change) to support the efforts of developing countries, while for the first time encouraging voluntary contributions by developing countries too, and extends the current goal of mobilizing $100 billion a year in support by 2020 through 2025, with a new, higher goal to be set for the period after 2025.