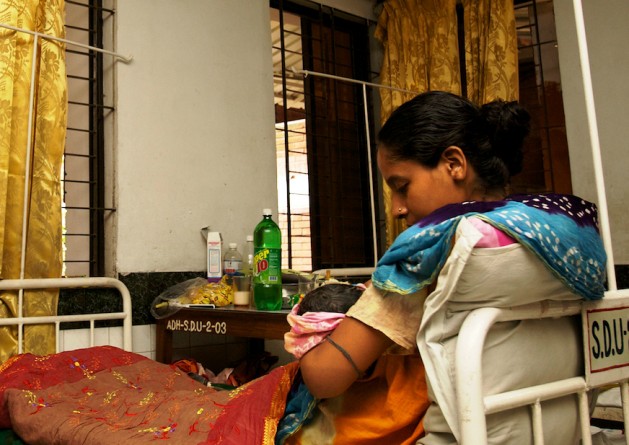 UNITED NATIONS, May 11 2016 (IPS) - Despite its many lifesaving benefits breastfeeding still struggles to compete with the marketing used by the multi-billion dollar baby formula industry, according to a new report published this week.

“Aggressive and inappropriate marketing of breast-milk substitutes, and other food products that compete with breastfeeding, continues to undermine efforts to improve breastfeeding rates,” a new report published this week by the World Health Organization (WHO), UNICEF, and the International Baby Food Action Network (IBFAN) found.

Considering the multitude of benefits associated with breastfeeding it is confusing to find that the rates of breastfeeding worldwide are worryingly low.

“Globally, nearly two out of three infants are not exclusively breastfed for the recommended 6 months – a rate that has not improved in two decades,” the report found.

An increase in breastfeeding rates could save 800,000 child lives every year, according to a major Lancet study published earlier this year.

However, breastfeeding could benefit from better promotion. An increase in breastfeeding rates could save 800,000 child lives every year, according to a major Lancet study published earlier this year.

Breastfeeding also benefits mothers. An increase in breastfeeding could prevent 20,000 deaths from breast cancer every year, the study also found.

Perhaps even more convincingly, the Lancet concluded that breastfed babies grow up to be smarter, gaining an additional three IQ points.

Breastfeeding can protect babies in developing countries from being underweight, or suffering from life threatening diarrhoea. Infant formula can be particularly dangerous when mixed with dirty drinking water or not mixed exactly according to instructions and it also lacks the important immune boosting properties of breast milk. Infant formula is also more expensive and creates more waste than breast milk due to its packaging.

At the other end of the spectrum being breastfed also reduces the risk of diabetes and obesity later in the life, the study also found.

The new report — Marketing of breast-milk substitutes: National implementation of the international code — documents regulation of the infant formula market.

There has been an increase in the number of governments regulating infant formula since 2011, the report said.

135 countries now have some form of legal measure related to the International Code of Marketing of Breast-Milk Substitutes. However “the quality and substance of specific Code-related provisions varies significantly,” and there are still 59 countries that have no regulations under the code.

“It is encouraging to see more countries pass laws to protect and promote breastfeeding, but there are still far too many places where mothers are inundated with incorrect and biased information through advertising and unsubstantiated health claims,” said Dr Francesco Branca, Director of WHO’s Department of Nutrition for Health and Development in a statement.

“This can distort parents’ perceptions and undermine their confidence in breastfeeding, with the result that far too many children miss out on its many benefits,” he said.

The WHO recommends that babies should be exclusively breastfed for the first six months of life with breastfeeding continuing up to two years of age, or beyond.

Global sales of breast-milk substitutes total US $44.8 billion, and are expected to rise to US $70.6 billion by 2019, the report stated.