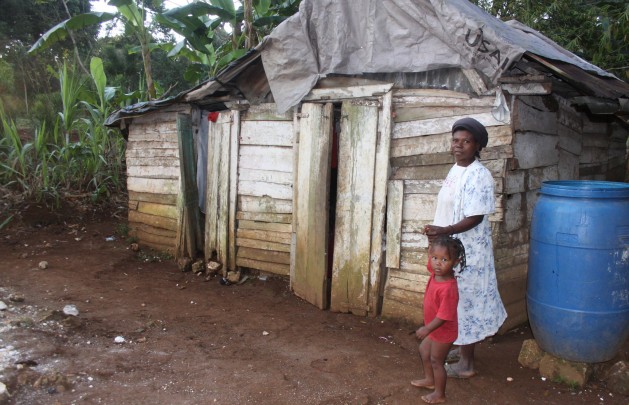 A mother and child stand by their temporary home in Haiti, the only Least Developed Country outside of Africa and Asia. Photo: Fritznelson Fortuné/IPS

UNITED NATIONS, May 25 2016 (IPS) - Since the establishment of the Least Developed Countries (LDCs) category in 1971, the international community has worked hand in hand to support its most vulnerable members.

Despite three successive Programmes of Action and notwithstanding the positive developments recorded by LDCs over the years, most of these countries have higher proportions of poor people who continue to face significant development challenges. 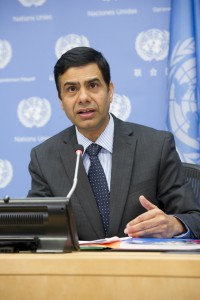 In 2011, the international community met in Istanbul, Turkey, for the Fourth United Nations Conference on the Least Developed Countries (LDC-IV) and adopted the 10-year Istanbul Programme of Action (IPoA) which articulated a set of commitments by LDCs and their development partners to overcome the structural challenges faced by the LDCs, achieve structural transformation of their economies, eradicate poverty, and enable half of the LDCs to reach graduation status by 2020. The LDC population consists of over 900 million people, in Africa, Asia Pacific and Haiti in the Western hemisphere. Where ever they may be they face lower human development, income and structural economic challenges plus a high degree of vulnerability to shocks and natural disasters.

I am often asked how these countries have progressed in the first five years of the IPoA? Given the vulnerabilities and significant challenges they continue to face, there have been encouraging albeit mixed results.  For instance, economic growth has been strong, even though its pace has been more volatile and below the average of the last decade. GDP for the group has grown from 4.3 percent in 2012 to 5.3 percent in 2014. We have also seen 12 LDCs reaching growth rates of 7% or more in 2014.  Duty-free quota-free market access for LDCs in developed economies increased slightly, while at least 18 developing countries are providing preferential market access to LDCs.

"It is particularly pertinent that despite a combined population of over 900 million, the LDCs’ share of world exports remains stagnant at around one percent."

The LDCs are also making progress in human development and reducing poverty.  There is increasing access to the internet and mobile telephone networks; the number of internet users per 100 people almost doubled, from 4.4 percent in 2010 to 8.6 percent in 2014, and this progress is being seen in almost all LDCs. We are also seeing expanding transport infrastructure, improvements in the regulatory environment for the private sector, reductions in child mortality and improving gender parity in primary education and the representation of women in parliament.

While graduation is a means to an end, a good reflection of progress is the increase in the number of countries that meet the graduation criteria. Until 2011, only three countries – Botswana, Cabo Verde and Maldives – graduated from the LDC category. Almost five years after the adoption of the Istanbul Programme of Action, 10 additional LDCs had reached the graduation thresholds and are currently at different stages of the graduation process. Furthermore, an encouraging number of LDCs have announced their ambition to graduate around 2020.

While graduation represents an important milestone in the development of LDCs, it comes both with advantages and challenges. Targeted and effective support measures to aspiring-to-graduate and graduating LDCs are therefore critical in ensuring a smooth transition.

While there have been positive trends, major challenges remain. Poverty runs deep and is multidimensional. Economic activities are still limited with high unemployment and volatility. Dependence on external support is critical yet aid to LDCs dropped sharply in 2014, with a 4 percent uptick in 2015. International support is vital for capacity enhancement, financial resources and economiccooperation.

In 2014, the total external debt of the LDCs ballooned with an increase of 8.8 percent.  It is particularly pertinent that despite a combined population of over  900 million, the LDCs’ share of world exports remains stagnant at around one percent and are predominantly comprised of primary commodities, which is a major source of the vulnerability of these countries to price fluctuations in global commodity markets.

Despite hard-won gains, LDCs continue to face significant challenges.  We often hear the analogy that when larger developed nations sneeze, the less developed catch a cold.  Building and maintaining the resilience of LDCs to external shocks continues to be a high priority. In a rapidly changing geopolitical, economic and natural environment – with the gamut of challenges from high debt levels, changing migration patterns and projected slowdown in the global economy – LDCs need support to be able to assess and mitigate the risks and alter their strategies accordingly.

It is a sad reality that while the world’s most vulnerable countries have contributed the least to climate change, they are most at risk from its negative effects and the least equipped to withstand and adapt to it. For LDCs, climate change is spoken in the language of severe droughts, melting glaciers, land degradation, rising sea levels, coastal erosion and salinization and depletion of aquifers which has a significant impact on large segments of the population. As we have witnessed all too often, for those LDCs which are small island developing States, a single extreme weather event can wipe away years of development gains in a matter of hours.

The task ahead is to ensure ambitious mitigation programs across the world, and likewise guarantee effective adaptation support to LDCs. The Green Climate Fund’s commitments to allocating 50 percent of its adaptation financing to vulnerable countries is crucial and likewise, the World Bank’s efforts, to increase its climate financing portfolio to 28 percent by 2020 are a critical step forward as is the Paris Climate Change Agreement

We are now mid-way through the implementation of the IPoA and the moment is upon us to take stock of successes, challenges and lessons learned. It is also an opportunity to capitalise on the shared will of the international community to redouble efforts in enhancing support for the LDCs.  The Midterm Review conference – in Antalya, Turkey from 27 to 29 May, 2016 – takes place on the heels of an unprecedented and ambitious agenda for the United Nations where in 2015, the Sendai Framework for Disaster Risk Reduction, the Addis Ababa Agenda for Action, the 2030 Agenda for Sustainable Development and the Paris Climate Agreement were adopted.  The Midterm review therefore presents a timely opportunity to foster greater synergies between the implementation of the IPoA and the 2030 Agenda for Sustainable Development. We are now in a unique position to make great strides towards ensuring the next five years will produce tangible and effective results for this group of countries.  Meaningful progress in the implementation of the Istanbul Programme of Action will provide a launching pad towards fulfilling the development aspirations set in the 2030 Agenda and other newly adopted global frameworks. Eradication of poverty and leaving no one behind demands that LDCs are kept at the forefront of global support and solidarity.

In addition, the conference also presents an important opportunity to foster transformative multi-stakeholder partnerships among all stakeholders including governments, private sector, academia, civil society and the United Nation to strengthen the enabling environment for sustainable development in LDCs.

The Midterm Review is held back-to-back with the World Humanitarian Summit taking place in Istanbul – from 23-24 May, 2016 – the outcomes for which have great relevance for LDCs as they face disproportionate impacts of man-made and natural disasters and humanitarian crises.

In this day and age of unprecedented global prosperity, rapid advances in science, technology and globalization, the citizens of LDCs should not remain entrapped in a vicious cycle of poverty, deprivation and inequity. It is not only a moral imperative, it is in the enlightened interest of the international community to help bring about structural transformation in these countries and help them eradicate poverty and marginalization.  The LDCs represent an enormous human and natural resource potential for world economic growth, welfare and prosperity.  Therefore, a strengthened global partnership that effectively addresses the special needs of the LDCs will also contribute to peace, prosperity and sustainable development for all.