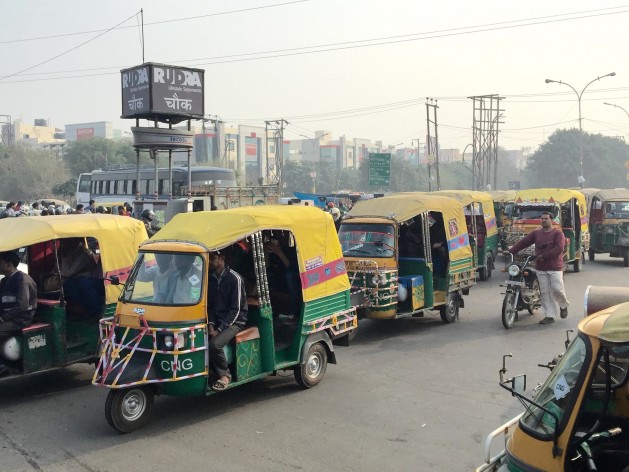 UNITED NATIONS, May 19 2016 (IPS) - China and India are not the only countries with an air pollution problem. Ninety-eight percent of cities in developing countries don’t meet World Health Organization (WHO) air quality standards, according to new research published by the UN body.

Yet, although almost all cities that measure air pollution don’t meet the standards, many other cities don’t even collect air quality data.

“We know that there are many cities around the world where air pollution is very bad which are not monitoring air quality,” Maria Neira, the director of the WHO Department of Public Health and Environment told IPS.

The WHO Global Urban Ambient Air Pollution Database currently includes information from 3000 cities, more than double the number of cities previously reported. According to the latest results, released from the database last week, 98 percent of cities in low- and middle-income countries with more than 100,000 inhabitants do not meet WHO air quality guidelines.

Yet, for a problem which the WHO says causes some seven million premature deaths each year, there remain big gaps in data, particularly for cities in Africa.

“Lack of data (is) a real hindrance for understanding air quality (in Africa),” Eloïse Marais, a Postdoctoral Fellow in the School of Engineering and Applied Sciences at Harvard University who studies air pollution in Africa told IPS.

“(Air pollution) is one of the areas of environmental health where the number of people getting sick and dying is actually increasing rather than decreasing globally,” -- Deborah Seligsohn

“The WHO results certainly highlight the dire need for sustained air quality monitoring,” said Marais. Particular attention should be given to African cities experiencing rapid urbanisation, such as Kinshasa in the Democratic Republic of Congo, Luanda in Angola, Lagos and Ibadan in Nigeria, Nairobi in Kenya and Addis Ababa in Ethiopia, she added.

By contrast to African cities, much more is known about air pollution in China and India.

Deborah Seligsohn, a researcher specializing in air pollution in China and India at the University of California at San Diego told IPS that the world’s two most populous countries measure air pollution in a large number of their cities.

“The magnitude is going to be bigger than anywhere else on earth because they both have over a billion people,” said Seligsohn.

Both China, with 1.3 billion people, and India, with 1.2 billion, have a higher population than the 1.1 billion people living in all of the countries in Africa combined.

“There are a lot of things China has been doing to reduce air pollution that are going to be useful for other developing countries,” she said.

For example, China has found ways to considerably reduce the cost of monitoring emissions from power plants. In the United States, power stations build elevators so that workers can reach monitors which measure the emissions coming from the smoke stacks. The elevators cost a quarter of a million dollars to build, so in China they decided to build staircases instead. The staircases have proved almost as effective and cost considerably less, said Seligsohn.

“The tiny stuff goes straight through your lungs and into your blood stream and the very big stuff that is annoying and dirty you are going to sneeze and cough out.”

In some cities the particles are bigger due to sand or dust in the air, just one of many differences in the types of air pollution found in different countries, which also makes it hard to rank the cities from worst to best.

The causes of air pollution in cities in Africa can “include fuelwood, backup generators, kerosene, charcoal — use and production — and very inefficient cars and motorcycles,” says Marais.

By comparison in China the problems are largely related to coal and the sulphur in vehicle fuel, says Seligsohn while in India, another problem is the burning of trash and the poor quality fuels that people use for home cooking.

Neira said that the indoor air pollution is responsible for 4 million of the 7 million premature deaths caused by air pollution every year.

In developing countries, this indoor pollution caused by fossil fuels used inside the house for cooking, heating and lighting, also contributes to outdoor air pollution, she added.

As more of and more people move to cities, air pollution will increasingly become one of the world’s biggest development challenges.

“It’s one of the areas of environmental health where the number of people getting sick and dying is actually increasing rather than decreasing globally,” said Seligsohn.

“The number of people getting sick from dirty water has actually gone down as we’ve become better at getting people a clean water supply. But that isn’t true with air pollution, as we become an increasingly urbanised world, as there’s more industry, (more power plants, more cars),” she said.

“Basically this is a global problem that we all have to work on.”