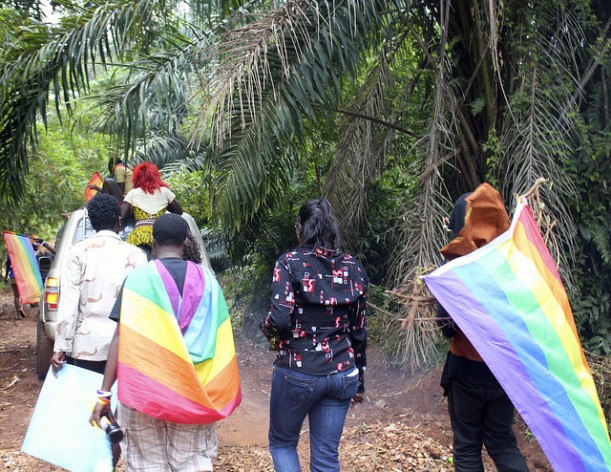 LGBT persons participate in a gay pride parade in Uganda, one of the countries where LGBT refugees face violence. Credit: Amy Fallon/IPS

UNITED NATIONS, Jun 23 2016 (IPS) - Despite their extreme vulnerability, lesbian, gay, bisexual, transgender and intersex (LGBTI) refugees often do not seek the assistance they need, since revealing their sexual or gender identities can put them in grave danger.

“People are just absolutely completely terrified to come out, and rightly so, they will be dead, they will be dead if they come out,” Neil Grungras, Executive Director of the San Francisco-based Organization for Refuge, Asylum & Migration (ORAM) told IPS.

ORAM works with some of the world’s most vulnerable refugees including LGBTI refugees fleeing Syria and seeking refuge in Turkey, where Grungras says that there are currently as few as five self-pronounced LGBT persons within a total population of over 2.7 million refugees.

“The number of LGBT people who make it through the system alive and request resettlements is small, it does not even reach the tip of the percentage of LGBT people that are represented in the international population.”

“I just had last week an Iraqi go back to Iraq because he could not bring himself to say the words to the UNHCR, could not,” said Grungras, referring to the UN Refugee Agency, which processes refugee claims.

Grungras noted that these fears were often based on refugees’ past experiences, particularly their experiences dealing with bureaucracies in their home countries, rather than an indication of UNHCR’s own procedures.

He noted that the UNHCR is “very, very concerned” about the safety of LGBTI refugees and has recently issued guidelines to ensure that their information is kept secure. He said that this was one of the top concerns raised by the UNHCR at meetings held in Geneva last week.

“Homophobic and transphobic attitudes from back home don’t evaporate simply because you’re a refugee, and so LGBTI refugees are often isolated and vulnerable to abuse." -- Jessica Stern.

One of the reasons that LGBT refugees are often particularly vulnerable is because they are not supported by their fellow refugees.

“Homophobic and transphobic attitudes from back home don’t evaporate simply because you’re a refugee, and so LGBTI refugees are often isolated and vulnerable to abuse,” Jessica Stern, Executive Director of OutRight Action International told IPS.

LGBTI persons face increased violence all around the world, as shown by the shooting at a gay nightclub in Orlando, Florida on June 12, where 49 people were killed and 53 injured.

“We hope that the press release is a sign that the members of the Security Council have finally recognised that homophobia threatens peace,” she said.

However Stern expressed concern that absence of gender identity from the statement was a “major omission.”

“There is no credible way to separate homophobia and transphobia in the impact of the Orlando massacre,” she said.

“Transgender people are often on the frontlines of violence.”

“In just the first six months of 2016, 100 transgender people around the world have been murdered.”

“This figure only reflects cases reported by the media; imagine how many others may have suffered,” she added.

While helping more LGBT refugees feel safe to come forward is important, Grungras says it is also important for the overall number of resettlement places for vulnerable refugees to increase.

“There’s just now a deep understanding that we’re hardly making a dent and that there are a lot of people in severe need of resettlement.”

“Very often the people who are doing the resettlement are in a dreadful quandary,” he said.

“I was sitting with a resettlement officer just last week in Ankara (Turkey) who I like, and respect, and trust, and know is incredibly sympathetic.”

“She said to me, well Neil what do you want me to do? I have a pregnant woman with two other children who has to do sex work to survive, I have somebody with cancer, and I have an LGBT person who is going to be killed by their family, do you want me to play God?”

According to figures released by the UNHCR last week, there will only be up to 170,000 resettlement places available for the world’s most vulnerable refugees in 2017, a small percentage of the 1.19 million refugees considered eligible for resettlement, and an even smaller percentage of the more than 60 million people displaced globally.

There are hopes that two summits to be held at the UN in September, convened by UN Secretary-General Ban Ki-moon and U.S. President Barack Obama, will see the international community find ways to increase resettlement places.