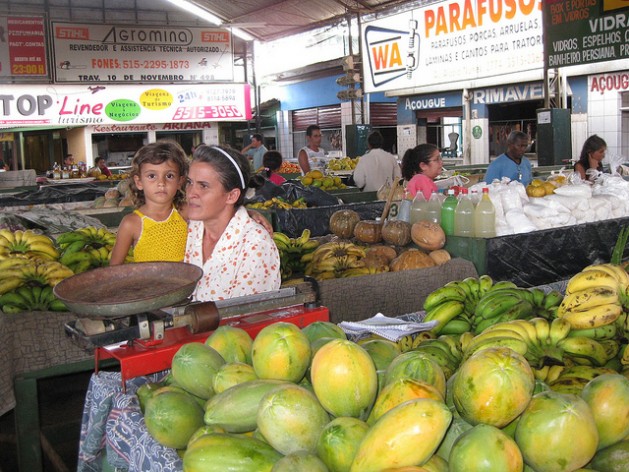 A mother and daughter at a market in Altamira, Brazil. Credit: Mario Osava/IPS

UNITED NATIONS, Jun 22 2016 (IPS) - Latin America and the Caribbean countries have experienced historic economic and social transformation in recent years. This has led to a considerable reduction in poverty and inequality and to advances in closing gender, labor and education gaps. These achievements are the result of a favorable economic environment as well as proactive social inclusion policies.

Despite this, 25 million to 30 million people risk falling back into poverty—a third of all those who left poverty behind during the last decade. The most vulnerable are the newly employed, women and workers in the informal sectors of the economy. Many face social exclusion that cannot be resolved with higher income, such as discrimination due to ethnic or racial group, skin color, sexual identity, migrant status or disability.

This week the UN Development Programme (UNDP) launched its flagship regional publication, the Human Development Report for Latin America and the Caribbean. The report, Multidimensional Progress: Well-being beyond income, proposes new metrics and new ways to act now to protect the social and economic achievements of the past decade and remove barriers that prevent lifting more people from poverty. This includes what we call “hard exclusions”, which go beyond income to factors like gender, race, ethnic group, sexual orientation and disability.

How do we move forward from here?

First, by recognizing that factors that push people away from poverty are different from those that prevent them from falling back. The former are strongly associated with employment and returns on education—especially in urban areas. But to boost resilience and prevent setbacks four factors are essential: access to social protection (such as pensions), access to care systems (especially for children and older persons, to level out incentives for women’s participation in the labor force), having physical and financial assets (such as owning a bank account, a home, a motorbike or a car that act as ‘cushions’ when crisis hits), and better labor skills.

Second, by addressing hard exclusions that are not related to income. More than closing ‘gaps’ in access to services, these exclusions speak of a citizenship deficit: discrimination due to one’s identity, lifestyle, disability or skin color. Being a woman, of African descent, indigenous, LGBTI, youth, a person with disabilities… all of this affects opportunities, the possibility of social and economic mobility and access to services.

Given these deficits, we must advance equal opportunity and affirmative action policies. Quotas to increase the number of women in parliament are a successful example of this approach. Other examples are the innumerable advances in recognition of collective rights, political autonomy and land/territory of indigenous peoples and communities in our hemisphere.

Our report reveals that Latin America and the Caribbean women work three times more at home (unpaid work) than men. And they earn less in the labor market, despite studying more than their male counterparts.

Demographic trends and the absence of care services (especially for children and older persons), restrict better participation of women in the labor market and families’ income generation. Moreover, a third of all women and girls face sexual violence at least once in their lives.

Third, it is essential to build a bridge between the short and long term. While much attention is now centered on how to revive economic growth, we must develop new approaches among different sectors and at the national and local levels throughout the life cycle. A pending issue that will influence the agenda is the transition from extractivist economies based on raw materials, to economies that find a new environmental balance, of biodiversity protection and of sustainable energy transformation.

Each Latin American generation defines what type of structural change it pursues. ‘More-of-the-same’ in economic growth will not guarantee that the previous gains will continue. Neither will countries ‘graduate’ from the structural challenges of progress and exclusion just by crossing an income threshold.

To achieve the ambitious goals laid out in the 2030 Agenda for Sustainable Development, we need to take a multidimensional perspective, to build sustainable and holistic well-being – beyond income aspects alone.

Multidimensional progress is a reachable horizon in Latin America and the Caribbean. Nothing that reduces the rights of people and communities or threatens environmental sustainability can be considered progress. It’s an opportunity to rethink progress, towards a true development with gains—not losses—in the social, economic and environmental fronts.