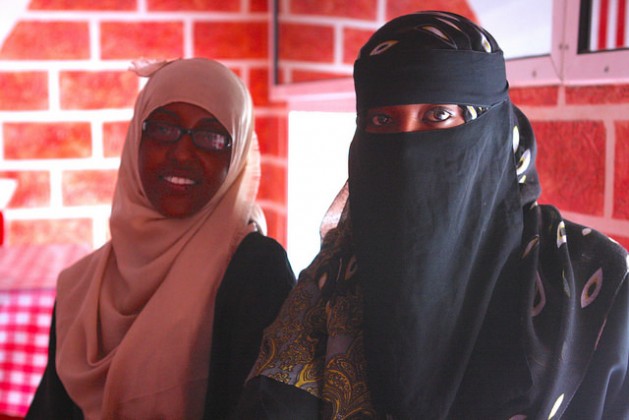 Hasna (left) and Marwa (right), nurses in their early twenties, were reluctant to be photographed on the street—primarily because of attention this drew from male Somalilanders—but were more comfortable in a quiet café. Credit: James Jeffrey/IPS

HARGEISA, Somaliland, Jun 10 2016 (IPS) - Amid the hustle and bustle of downtown Hargeisa, Somaliland’s sun-blasted capital, women in various traditional Islamic modes of dress barter, argue and joke with men—much of it particularly volubly. Somaliland women are far from submissive and docile.

Somaliland’s culture is strongly influenced by Islam—Sharia law is included in its constitution—while this religiousness appears to co-exist with many signs of a liberal free market society, a dynamic embodied by Somaliland women whose roles in society and the economy undercut certain stereotypes about women’s Muslim clothing equalling submission or coercion.

“It’s about what’s inside your head, not what’s over your head.” -- Zainab, dentist.

Somaliland has had to develop a strong entrepreneurial streak since 1991 and its declaration of independence from Somalia never being recognised by the international community, leaving it to rebuild its shattered economy and infrastructure alone following a civil war.

Today, many small businesses are run by women, who in addition to bringing up large numbers of children are often breadwinners for families whose husbands were physically or mentally scarred by the war.

“Here women are butchers—that doesn’t happen in many places. It shows you how tough Somaliland women are,” Zainab says. “It’s about what’s inside your head, not what’s over your head.”

The issue of how the Quran, the central religious text of Islam, instructs women to dress is a source of continuing debate around the world, although a traditional stance is taken in Somaliland with all women covering at least their hair in public.

“Everyone is free to follow their religion and this is what the Islamic religion says: that a woman should cover their body,” says Kaltun Hassan Abdi, a commissioner at the National Electoral Commission, responsible for female representation in elections.  “It’s an obligation, so women don’t see it as discrimination or violation of rights.”

But some Somalilanders express concern about a steady drift toward Islamic conservatism in Hargeisa: music no longer blares out from teashops; colourful Somali robes are increasingly replaced by black abayas; more women are wearing niqabs—face veils—than a year ago; and no woman goes about town bareheaded as happened in the 1970s.

“The last 15-18 years have witnessed a dramatic change in the extent to which religion influences how people live their daily lives,” says Rakiya Omaar, a lawyer and chair of Horizon Institute, a consultancy firm that works on strengthening the capacity and self-reliance of institutions in Somaliland. “There is pressure to live as a serious Muslim—it may be subtle or overt; it may come from family or it may be the wider society that you interact with.”

But it’s hard to find a woman in Hargeisa who says she feels pressurised by Islam or society’s adherence to it (women in smaller towns or rural areas are more likely to face increased religious conservatism, Omaar notes).

“I asked myself why I wear the hijab, and decided because that’s Allah’s will, and it’s part of my religion and my identity, and since then it’s been a choice,” Zainab says. 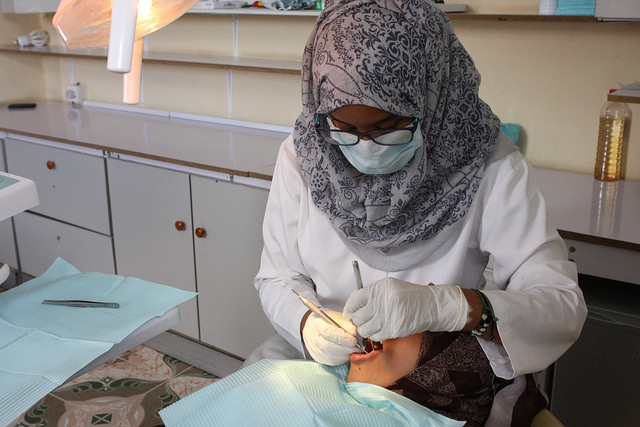 During Mohamed Siad Barre’s communist-inspired dictatorship throughout the 1970s and ‘80s, Islam was suppressed in Somalia. Since Somaliland broke away, Islam has been able to reassert itself—including the flourishing of madrassas, Islamic religious schools—with positive effects, according to some.

“There are problems for women here but they’re not due to religion rather they are Somali cultural problems,” says Khadar Husein, operational director of the Hargeisa office of Transparency Solutions, a UK-based organization focused on capacity building in civil society.

“The man is mainly dominant in Somali society—things like domestic violence go back to that culture but has no root in Islam. Getting a more religious society means eliminating those cultural problems.”

But religion doesn’t appear to be easing restrictions on women in Somaliland’s political life.

“Without a women’s quota I don’t think there will be any more women in parliament,” Baar Saed Farah, the only female in the 82-member Lower Chamber of parliament, says about current lobbying to give 30 seats to women from forthcoming elections in 2017 (no women are permitted in the 82-member House of Elders in the Upper Chamber).

“In normal employment there is no differentiation between genders but when it comes to political participation it becomes very difficult for women because of a culture that favours men,” Farah says. “It has been there for a long time—even women may not accept a woman running for election as they’re so used to men always leading and making decisions.”

Somaliland remains a strongly male-dominated society. Polygyny, where a man can take several wives, is widely condoned and practised. Marriages are frequently arranged between the groom and the family of the bride—without the latter’s consent—and it’s easier for men to initiate a divorce. The prevalence of female genital mutilation in the Somalia region stands at about 95 percent, according to the United Nations Children’s Emergency Fund.

And while Somaliland women may be a force to be reckoned with among markets and street-side trading, they still face many limits to full economic opportunities.

“They only operate small businesses, you won’t find many rich business women here,” says Nafisa Yusuf Mohamed, director of Hargeisa-based female empowerment organisation Nagaad Network. “For now there aren’t many alternatives, but this could change as enrolment in higher education is improving.”

She notes how many young Somalilanders such as her 17-year-old daughter, who recently started wearing the niqab of her own volition, use social media to discuss and learn more about Islam once they finish attending madrassas.

There are also other more prosaic reasons for wearing the likes of the niqab, observers note. Some women wear them because they are shy, or want to protect their skin from harsh sunlight, or want to fit in with friends wearing them.

Changing Muslim clothing trends may be most noticeable to the outsider, but other developments also illustrate Somaliland’s increasing religiousness: the extent mosque prayer times affect working hours, both in the public and private sector; the higher proportion of adults praying the full five times a day; and the increasing numbers of mosques built.

“These changes are also a response to wider regional and international developments which have affected the Muslim world, in particular the growing perception that life in the Western world is becoming more hostile to Muslims,” Omaar says.

Although for most Somalilanders, exasperation with the West appears to primarily stem from how countries such as the UK—Somaliland was a UK protectorate until 1960—continue to not recognise its sovereign status, resulting in enormous financial drawbacks for the country.

Hence, as Somaliland celebrates its 25th anniversary of unrecognized independence this year, its economy remains perilously fragile, with poverty and unemployment rampant among its roughly four million-plus population.

“If you look at the happiness of Somalilanders and the challenges they are facing it does not match,” Husein says. “They are happy because of their values and religion.”