The Paradox of Refuge: Rise of Gender-Based Violence in Times of Crisis 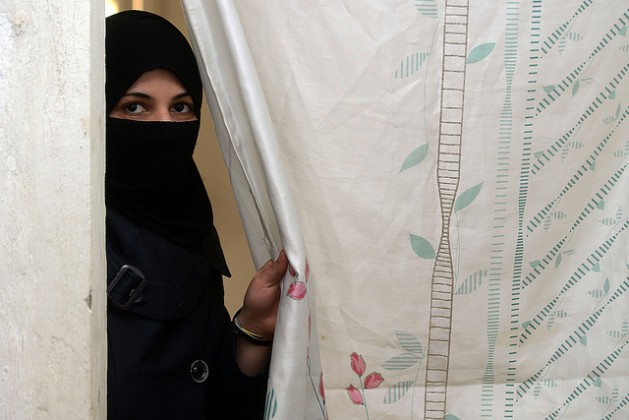 A Syrian refugee woman. In spite of the fact that women and girls make up over half of the world's 18 million refugees, little attention or resources have been dedicated to meeting their needs. Although all refugees face health and security risks, women are susceptible to additional problems such as violence as a result of their gender. Credit: IPS

ROME, Jun 20 2016 (IPS) - Since the outbreak of war in 2011, 9 million Syrians have fled from their homeland, creating one of the gravest migrant crisis’ the world has ever seen. However, what happens to these vulnerable migrants once they secure the refuge they so perilously seek? Can refuge really bring safety to all? Or is ‘the refugee camp’ nothing more than the creation of another war, in this case, fought against one’s own troubled people. Particularly, for those who are traditionally stigmatized, such as women and girls.

In Lebanon, many Syrian women and girls bear the burden of the trauma their communities now carry. From the witnessing of ruthless warfare to the relentless struggle to secure a place of refuge, emotional scars run deep within the displaced psyche. As a result, many have identified a rise in intimate partner violence (IPV), early marriage and survival sex since arriving at the camps. In many cases, women and young girls have been used as commodities, providing sexual favours to men in order to cover the cost of living for their families. As one refugee explained in a focus group discussion , “And if you want help from other NGOS’ you should send your daughter or your sister or sometimes your wife, with full make-up on so you can get anything, I think you understand me”. (*)

The increase of domestic and sexual violence within these temporary settlements is not unique to the Syrian refugee crisis. With over 18 million of the refugee population being made up by women and girls, the increase of gender-based violence within these communities is a critical global issue. In spite of its severity, little attention is paid to the plight of refugee women and their struggle for safety. The United Nations High Commissioner for Refugees states that data on violence against women, are few and limited in scope. In most refugee camps, there is no effective reporting system, and there is still uncertainty about how to respond to such reports from victims, which in turn, leaves them with little or no protection, and more susceptible to acts of sexual and domestic violence.

As one Palestinian refugee commented on the conditions for females in the Bourj al-Barajneh refugee camp between 2003-2006 “It was better during the war“.(**) According to Nduna S. Goodyear, refugees, especially women, are made vulnerable to violence at every stage of their quest for safety. Reports of Burundi refugee women in the established camp of Kenembwa in Tanzania recounted acts of violence perpetrated by policemen, soldiers, fellow refugees and husbands, with one woman even describing a case of rape by a nongovernmental security staff member within the camp. In a survey conducted by the International Rescue Committee, 79% of the Afghan women interviewed reported being beaten by their husbands in a refugee camp in Pakistan. Jeff Crisp’s study on the security in Kenya’s refugee camps describes one case of a woman and her infant who were detained for seven days in a cell her offense; being found guilty of committing adultery. These are amongst the few examples of the thousands of gender-based acts of violence being committed on a daily basis in refugee camps everywhere.

Experts say the root cause of this violent epidemic which targets women in refugee settlements links back to masculinity. In what is known as “heightened male vulnerability” caused by bearing witness to torture, violence and rape many men feel helpless and isolated. As a result, they suffer from low self-esteem, stemming from the failure to protect their families, which, in turn, leads them to assert a negative form of masculinity upon relatives and other female refugees in the camps. Their feelings of powerlessness and frustration are reflected in the beatings, rape and other forms of violence they perpetrate against women. Ghida Anani recorded one Syrian man’s description of senseless violence against his wife “When my wife asks me for vegetables or meat to prepare food, I hit her. She does not know why she was hit, neither do I”.(***) In this sense, The wounds of war are still freshly open for these displaced men, whose defeated psyches have resulted in grave implications on their female counterparts.

Although many international organizations have been working on reducing gender-based violence in refugee camps across the world, many have proved ineffective due to the decentralized nature of their services. With limited resources, a lack of information and a rising number of unreported cases of sexual and domestic violence, the future looks grim for displaced women and girls, the most vulnerable group in these communities plagued by feelings of anger and loneliness. It is clear that if these pressing issues of gender violence continue to be kept in the shadows, millions of refugee women and girls will never obtain the information provision, awareness raising, and health and psychological services they so desperately need.