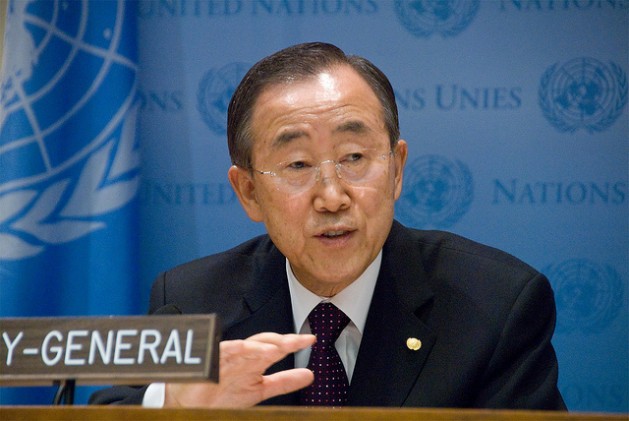 NEW YORK, Jun 23 2016 (IPS) - The United Nations claims it is doing its best to curb widespread sexual abuses in its peacekeeping operations overseas – from Haiti all the way to the Central African Republic.

Richards, who represents over 60,000 staffers in the UN system worldwide, told IPS: “We cannot stand by while a few colleagues and military personnel commit acts of sexual exploitation and abuse against those seeking our help.”

Judging by what Secretary-General Ban Ki-moon and member states have said, the intentions are there, but there’s a lot of work to do, and it’s not clear how far things are moving forward, said Richards, who is based in Geneva.

“That’s why we as staff unions have decided to take a moral stand,” he declared, pointing out that last year alone, 99 women, children and men were allegedly sexually exploited or abused by those working under the UN flag.

In a report released in March, Human Rights Watch said exploitation and abuse by UN peacekeepers and personnel have been reported since the 1990s relating to peacekeeping missions in Bosnia and Herzegovina, Cambodia, the Democratic Republic of Congo, Timor-Leste, Haiti, Liberia, Sierra Leone, and South Sudan, among others.

Troops from Pakistan, Bangladesh, Sri Lanka, Uganda, Burundi, the Republic of Congo, and the Democratic Republic of Congo have been among those implicated in the abuse, although some of those cases concerned peacekeeping forces led by the African Union. The UN’s handling of sexual abuse claims by French Peacekeepers in the Central African Republic has also drawn widespread condemnation, although the French troops were not UN Peacekeepers.

“We cannot stand by while a few colleagues and military personnel commit acts of sexual exploitation and abuse against those seeking our help.” -- Ian Richards.

Also in March, the UN began investigating 104 new cases of sexual abuses with the peacekeeping mission in the Central African Republic.

Asked for a response, UN Deputy Spokesperson Farhan Haq told IPS the Secretary-General is trying to ensure that a system is in place to prevent sexual exploitation and abuse by UN personnel and to have accountability when such abuse occurs.

“He continues to follow up with Member States on this issue and appreciates the support of UN staff in that effort,” said Haq.

It is also unclear how staff and victims should report abuse and what exists to protect them.

For example, he pointed out, the whistleblower policy still doesn’t require the Ethics Office to be accountable for failure to protect whistleblowers.

“As recent events have shown, we desperately need such a policy.”

There also needs to be a culture change. It cannot be right that staff are discouraged from raising questions about the behaviour of certain troops. Accountability should apply to all who turn a blind eye, he noted.

Richards appreciated the work of Jane Holl Lute, “but she needs more support for her recommendations.”

Last February, the Secretary-General, alarmed by the rise in sexual abuse, appointed Lute as the Special Coordinator on Improving UN Response to Sexual Exploitation and Abuse.

In a statement released June 22, the Coordinating Committee called for joint action by colleagues, UN management and member states to:

The staff unions believe that each case of abuse and rape, whether committed by military personnel or our own colleagues, tars all staff with the same brush and damages the trust staff have worked so hard to build with the communities they serve.

Both the Secretary-General and member states have rightly condemned this trend, the statement added.

“But despite this, allegations of sexual exploitation and abuse continue to go un-investigated, high profile cases remain unprosecuted, member states continue to argue how best to prosecute guilty peacekeepers, and many staff feel scared to report abuse for fear of retaliation.”

The staff unions of the UN common system, grouped under the staff federations have decided to issue the statement “as a wake-up call to colleagues, our organisations and member states.”

The Secretary-General has said “the United Nations, and I personally, are profoundly committed to a zero- tolerance policy against sexual exploitation or abuse by our own personnel. This means zero complacency. When we receive credible allegations, we ensure that they are looked into fully. It means zero impunity.”

According to the UN’s Department of Peacekeeping Operations, UN rules forbid sexual relations with prostitutes and with any persons under 18, and strongly discourage relations with beneficiaries of assistance (those that are receiving assistance food, housing, aid, as a result of a conflict, natural disaster or other humanitarian crisis, or in a development setting).

The UN has a three-pronged strategy to address all form of misconduct including sexual exploitation and abuse: pre­vention of misconduct, enforcement of UN standards of conduct and remedial action.