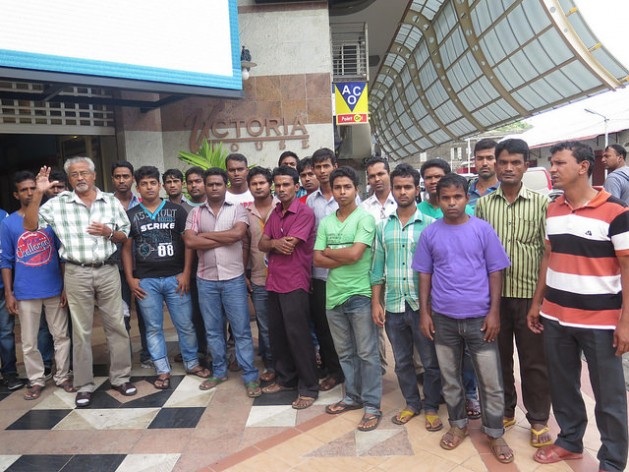 Workers from Bangladesh in Mauritius. Many fall into debt to pay for their travel, yet find it almost impossible to save any money despite working long hours. Credit: Nasseem Ackbarally/IPS

PORT LOUIS, Aug 29 2016 (IPS) - They come from Bangladesh, China, India and Madagascar, mainly to run the machines in the textile industry here. But they do all kinds of other jobs too, from masons to bakers, house cleaners and gardeners.

For the eight consecutive year in 2016, the World Bank’s Ease of Doing Business report ranked Mauritius first among African economies, and its GDP per capita was over 16,820 dollars, one of the highest in Africa. But there is a darker side to the success of this upper middle income island nation in the Indian Ocean, situated about 2,000 kilometres off the southeast coast of the African continent.

“The government argues that foreigners are hired because the locals refuse the jobs. The truth is the government itself discourages the locals by introducing a four-month short-term contract, for example, in the construction sector." -- Trade unionist Reeaz Chuttoo

Local enterprises rely on foreign workers because Mauritians are increasingly reluctant to work long hours under difficult conditions. But these foreigners live in very poor conditions and in many cases, in human indignity.

Thirty-six-year-old Bangladeshi Maqbool* left his wife and two children back home in Dhaka two years ago and came to work in the manufacturing sector in Mauritius, hoping to earn enough money to offer a decent life to his family.

“I paid 150,000 takkas (about 2,000 dollars) to an agent who got me this job. I was supposed to get 675 dollars a month, which represents a huge amount in my country, and I was ready for any sacrifice to earn it,” he said. To his bitter disappointment, he earns only about half of that.

Foreign workers all have such stories to tell. They take loans or sell the family’s lands or jewelry to pay for their travel to Mauritius. “The island is very beautiful but there is no money here. I run short of money every month after paying for my own expenses. I send some to the family every three months and I save nothing,” adds Massood*.

Both men are frustrated as they have to leave the island in a couple of months and they have yet to save any money to take back home.

Running away from poverty

Poverty, unemployment and the rising costs of living in their home countries force thousands of Bangladeshis, Chinese, Indians and also Malagasy people to look for jobs abroad. About 40,000 of them already work in the manufacturing sector, the construction industry, hotels, transport and also in the seafood hub. They start work very early in the morning and finish up very late at night. They are forced to do overtime and do not earn more than a 150 dollars a month.

A local welfare officer from a well-known textile enterprise confirms under condition of anonymity that the foreigners work night and day with little time for rest and live and sleep in unhygienic dormitories with just a cupboard and a thin mattress full of fleas and bugs.

“I feel sorry for them. They live like animals and are helpless. They accept things as they are,” he told IPS.

Those who resist or cause trouble on their worksites are sent back home. Hundreds of them faced this fate last year after they took to the streets demanding better wages and protesting against their working conditions. Even though, says trade unionist Feisal Ally Beegun, these migrants are exemplary workers.

Still, some of them claim they are happy. “Please sir, tell them to give me more work and more money, no fuss about it,” one Bangladeshi worker pleaded with IPS, while others working at the Compagnie Mauricienne du Textile (CMT), which employs a few thousand expatriates, ran away upon seeing journalists.

A security guard posted at the gate of this factory in Phoenix, in the centre of the island, revealed that the foreigners have had so many problems with their employer and the police last year that they now refuse to talk to the media.

The antipathy of the locals for the textile and manufacturing sector and for low-paid jobs has resulted in the import of labour to keep the wheels of the island’s industry turning. They were first brought in 1992 as a temporary measure as the industry moved from labour-intensive to capital-intensive manufacture.

Twenty-five years later, they are still here and the government believes they add value to the island’s economy by helping the factories deliver on time and also help in keeping the locals’ jobs.

Trade unionist Reeaz Chuttoo begs to disagree. “The government argues that foreigners are hired because the locals refuse the jobs. The truth is the government itself discourages the locals by introducing a four-month short-term contract, for example, in the construction sector, which the Mauritians refuse. In the seafood hub, foreigners are hired only for the night shift because no local does it.

“So the locals prefer to hawk cheap imported goods on the street rather than working long and late hours, even if they have to run from the police,” he says.

Chuttoo warns that a social explosion is in the making, with high unemployment, too many foreign workers and not enough jobs for the locals. “Mauritius is already invaded by a feeling of xenophobia and racism towards foreign workers,” he adds.

Jaynarain Mathurah, director at the Special Expatriate Unit of the Labour and Industrial Relations Ministry, brushes aside these allegations, arguing that foreign workers enjoy the same working conditions as the locals.

“We do not discriminate between them. The free zone manufacturing sector is governed by a remuneration order that is applied to all. Above this, there is a Special Migrant Workers Unit that take care of these migrants and it intervenes very fast with the employers when a problem arises,” he told IPS.

He believes the foreigners are well treated but agrees that “seeing their number, it happens that we are unable to visit them as often as we would have liked.”

“We believe they are well-off regarding their wages and their working and living conditions. Apart from their wages, they also get accommodation, food and transport,” he added.

According to him, low-paid jobs are common in developing countries where the free zone manufacturing sector has been introduced in a bid to create jobs. Investors are always looking for cheap and skilled labour and right now many enterprises in Mauritius plan to expand their activities and they need skilled labour.

“Where do I get them?” shouts a manager at Firemount Textiles in northern Mauritius.

Foreign workers will not stop coming to this island anytime soon, as they are needed to support its economic development in the absence of locals. They are now expected to increase in the agriculture and the ICT sectors.

*Names changed to protect their identities.