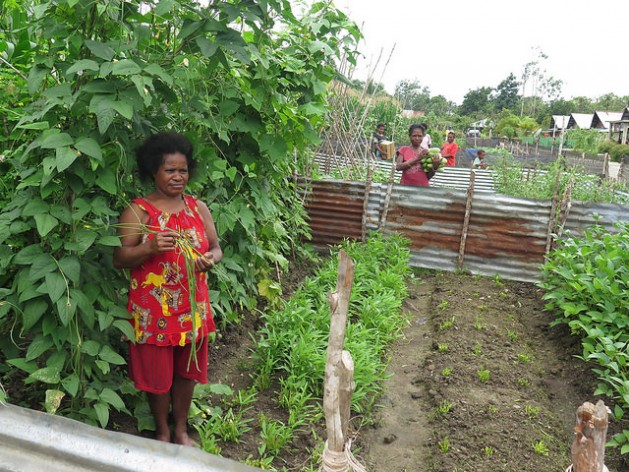 SENGGI, Indonesia, Oct 24 2016 (IPS) - Only two decades ago, Usku, Molof and Namla, three villages in Senggi District, Papua, were the battlefield of feuding tribes fighting for their ulayat (communal land). Afra, the triumphant tribe, then settled in the villages and led a life of hunting and gathering.

Their semi-nomadic lifestyle carried on despite the so-called transmigration in the adjacent village of Waris, where villagers from Java started a new life under central government sanction.

The three villages border Papua New Guinea, covering around 4,000 square kms, and are the least developed spots in the island of Papua.

Now the villages are being transformed, with permanent houses and front-yard farming. Where there used to be scarcity, food abounds.

It all began less than three months ago when the ministry of villages, underdeveloped regions and transmigration sent a team of agricultural and social experts to the villages and worked together with the locals to improve the living conditions of the Indonesia’s eastern-most border communities.

Dasarus Daraserme, 50, said that farming makes his life much easier. “These days, I don’t have to go deep into the forest to find food. It’s all right here in my front yard, you see?” he told IPS, pointing at his newly-sown crops.

“It was getting harder and harder to find food, animals and herbs there [in the forest],” he added.

Daraserme said his plot yields more than he and his family need, even after he sold the surplus. “We need only one and half kilogrammes of vegetables and fruits a day in average, or some five kilogrammes a week. Now we have hundreds of kilogrammes of cucumber, soybean, chilly, tomatoes, green beans. We don’t know what to do about it,” he said.

Anton Sirmei, 53, who grows pumpkin, kale, cabbage, chilly and tomatoes, also has a surplus. “In the past, there was a lack of food. That’s a problem. Now we have more. This is also a problem,” he said.

The closest town with a market is Senggi, which is 12 hours away on foot. Car transportation is available only once a week.

Professor Ali Zum Mashar, who trains the locals in farming techniques, is now helping them organise a cooperative to sell their agricultural products.

“The government invested some money in the village corporation, just the set the wheel of business in motion,” Mashar said.

Mashar said he actually expected a large surplus. “My microbe-based fertilizer can change bare lands into fertile spots. It is able to convert an ex-mining site to a green farm, let alone this fertile soil of Usku,” he said.

He found 18 species of microbes in the forests of Kalimantan while doing his doctoral studies in 2000. He eventually developed a technology that converts the microbes into liquid form, which he calls Bio P 2000 Z. Successful experiments have proved their capability to increase crop yields by as much as threefold.

“The crop yields should double in quantity, quality and speed. We started working in August, now after only three months, you can see for yourself,” he added, pointing at the gardens in the houses’ front yards.

He said the first goal is that the people have enough food, which has been achieved. Expanding the markets is the next step.

The villagers harvest their crops every two weeks. In terms of both quantity and quality, the Usku villagers produce better vegetables and fruit than their counterparts in the transmigration enclave, who are mostly skilled farmers from Java.

Usku, Molof and Namla village definitely have much more to offer than vegetables, fruits and crops to the outside. Non-timber forest products such as herbs and spices, honey, cinnamon, resin, sandalwood and various fruits also have high economic values for the local community.

Mashar and his team are now constructing a ranch for deer breeding in effort to reduce deer hunting in the forest. “But deer breeding is more than just foodstock. It will become tourist attraction too. So soon we will have a sort of village tourism here,” he said.

The biggest challenge now is training villagers in business management, in a community where 80 percent of the population is illiterate. The village has only one primary school with poor facilities. Four teachers manage around 150 students.

Health care is another major issue. The clinic has only one doctor and often has no medicines. Common diseases here are elephantiasis, skin fungus and mumps.

But hopes are high that the increasing harvest will improve incomes, and bring better medical services, education and infrastructure.

“There is still a long way to go. But we are paving the way to a better tomorrow,” Mashar said.