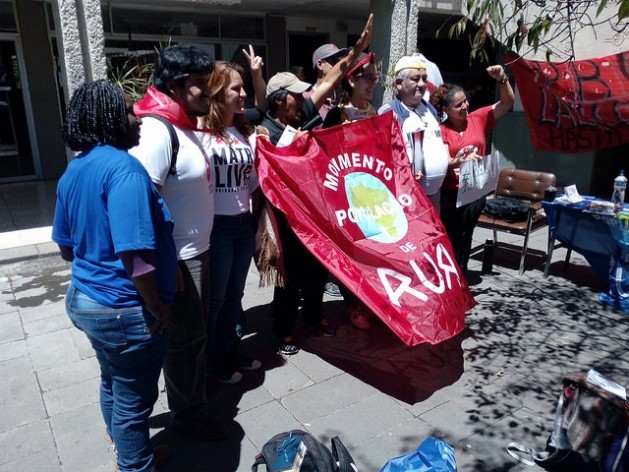 Activists protest during the Resistance to Habitat III social forum held at the Central University of Ecuador, which hosted the gathering held parallel to Habitat III, bringing together 100 NGOs from 35 countries, to debate on how to create cities for all. Credit: Emilio Godoy/IPS

QUITO, Oct 21 2016 (IPS) - The Third United Nations Conference on Housing and Sustainable Urban Development and the alternative forums held by social organisations ended in the Ecuadorean capital with opposing visions regarding the future of cities and the fulfillment of rights in urban areas.

On Thursday Oct. 20, the representatives of 195 countries taking part in the Habitat III conference adopted the Quito Declaration on Sustainable Cities and Human Settlements for All, after four days of deliberations.

The basis of the declaration, also known as the New Urban Agenda, is the promotion of sustainable urban development, inclusive prosperity, and spatial development planning.

“If you see the New Urban Agenda as building international cooperation, agreed on by the countries and implemented by municipal governments, which did not take part in drawing it up, it’s heading for a crisis, because there will be clashes.” -- Fernando Carrión

In the 23-page declaration, the states commit themselves to fighting poverty, inequality and discrimination; improving urban planning; and building cities with resilience to climate change.

At the same time, academics and social movements laid out their visions of social development of cities in two alternative social forums held parallel to the Oct. 17-20 summit, criticising Habitat III’s approach to urbanisation and questioning how effectively it can be applied.

“If you see the New Urban Agenda as building international cooperation, agreed on by the countries and implemented by municipal governments, which did not take part in drawing it up, it’s heading for a crisis, because there will be clashes,” Fernando Carrión, the Ecuadorean activist who headed the Towards an Alternative Habitat 3 social forum, told IPS.

During this parallel forum, held at the Latin American Faculty of Social Sciences (FLACSO), some 140 speakers from 32 nations and 40 organisations from around the region discussed urban rights; the dialogue with local governments and social movements; housing and spatial justice, a term similar to the right to the city.

Habitat III, the cities summit organised by U.N.-Habitat, drew around 35,000 delegates of governments, non-governmental organisations, international bodies, universities, and companies, and gave rise to the New Urban Agenda, which is to chart the course of political action aimed at sustainable urban development over the next 20 years.

After the United States and Europe, Latin America is the most urbanised part of the planet, as 80 percent of the region’s total population of 641 million people live in urban areas.

At least 104 million Latin Americans live in slums; worldwide the number of slum dwellers amounts to 2.5 billion, according to U.N.-Habitat.

This phenomenon poses the challenges of land title regularisation and the provision of basic services, while aggravating problems facing cities like pollution, increasing traffic, urban sprawl and inequality.

“We need to rethink how to organise cities. We have to organise and mobilise ourselves. We’re going to assess compliance by national and local governments, which are key, because many things will depend on their compliance,” Alison Brown, a professor at the University of Cardiff in the UK, told IPS. 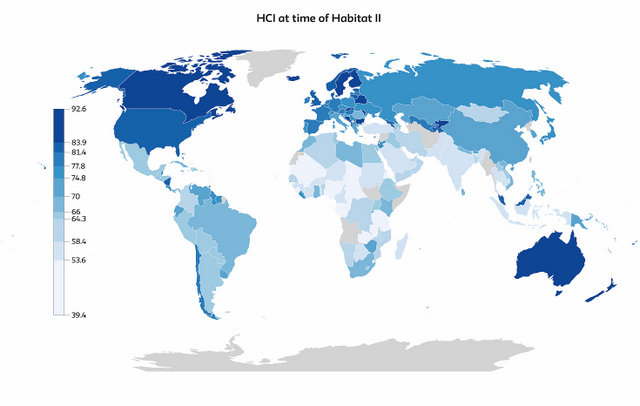 Since the first Habitat conference, in Vancouver in 1976, the world has only fulfilled 70 percent of the commitments adopted at the first two summits, while progress has practically stalled since Habitat II in Istanbul in 1996. Credit: HCI

The Quito Declaration drew criticism on some points. One of the main concerns that arose in the debates was about the “post-Quito” implementation of the commitments assumed by the states and social organisations.

The Habitat III accords “cannot generate the urban reforms that we need, such as integral access to land with services. That can only be achieved through struggle. It is local political participation that makes it possible to press for urban reform,” Isabella Goncalves, an activist with the Brazilian NGO Brigadas Populares, told IPS.

She attended the Oct. 14-20 Resistance to Habitat III social forum, which brought together delegates from about 100 social organisations from 35 nations to address issues such as opposition to evictions, the promotion of social housing, and defending the right to the city.

In its final declaration, the social forum called for strengthening the movements defending the right to land and territory and respect for the universal right to housing, and questioned Habitat III for pushing for urbanisation to the detriment of rural areas and their inhabitants.

The Habitat International Coalition criticised the New Urban Agenda’s “narrow vision”, and lamented that Habitat III had forgotten about protecting people from forced eviction and about the need to fight the shortage of housing and to achieve the right to universal housing.

It also urged countries to “regulate global financial transactions; end or limit opaque speculative financial instruments; steeply tax real-estate speculation; regulate rents; enhance the social tenure, production and financing of housing and habitat; and prevent privatisation of the commons, which is subject to attack under the neoliberal development model.”

Academics and social movements want to avoid a repeat of what happened post-Habitat II, which was held in 1996 in Istanbul, and whose implementation lacked follow-up and evaluation.

For that reason, the organisers of Towards an Alternative Habitat 3 agreed on the creation of an observatory for monitoring the decisions reached, biannual meetings, wide publication of the results of research and follow-up on the progress made by cities.

The Quito Declaration mentions periodic reviews, and urges the U.N. secretary general to assess the progress made and challenges faced in the implementation of the New Urban Agenda, in his quadrennial report in 2026.

The decade between the summit in Istanbul and the one held this week in Quito serves as a demonstration of what could happen with the New Urban Agenda.

The Global Urban Futures Project’s Habitat Commitment Index, presented during Habitat III, shows how little has been achieved since 1996.

Between Habitat I, held in 1976 in Vancouver, and Habitat II, the global average score in terms of fulfillment of the commitments assumed was 68.68, according to the Project, a network of academics and activists based at the New School University in New York City, which created the Index based on infrastructure, poverty, employment, sustainability, institutional capacity, and gender indicators.

But since the 1996 conference, the global average only increased by 1.49 points. Latin America and Southeast Asia increased their scores, while North and sub-Saharan Africa showed extremes in both directions, with large increases and decreases in HCI scores.” India made no progress, and China saw a “significant decline” in its score.

“We didn’t manage to get a citizen monitoring mechanism or advisory committee included in the New Urban Agenda,” Luis Bonilla of El Salvador, who is the chief operating officer for TECHO International, told IPS.

“For that reason, we will create a follow-up mechanism. Concrete commitments are needed” within the agenda, he added.

Carrión, a professor at FLACSO and a coordinator of working groups in the Latin American Council of Social Sciences (CLASCO), said “the attention of many organisations was drawn, and now we will see what can be done from here on out.” For social movements, then, Quito marked the start of a long road ahead.