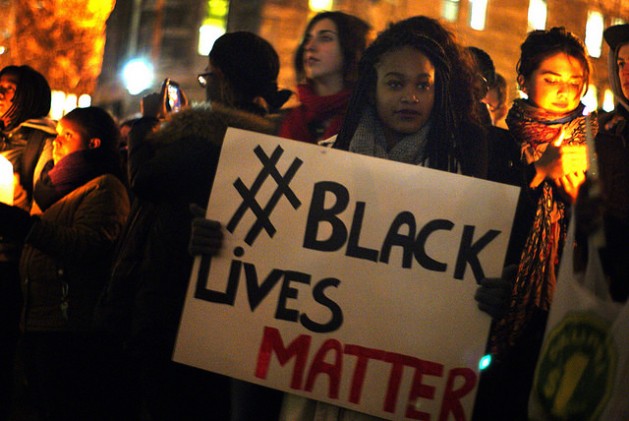 A vigil for Ferguson at McGill University in Montreal in November 2014. Credit: Gerry Lauzon / Flickr Creative Commons CC BY 2.0.

“A systemic ideology of racism ensuring the domination of one group over another continues to impact negatively on the civil, political, economic, social and cultural rights of African Americans today,” said the UN Working Group of Experts on People of African Descent, in a report released in August.

So far this year 212 black people have been killed by police in the United States, according to statistics collected by The Guardian. This is almost a quarter of the total 883 people killed by police in 2016, despite the fact that only 14.4 percent of US Americans are of African descent.

While only 6.5% of the US population are African American men, they constitute 40.2% of prison populations, according to Ana DuVernay’s recent film 13TH. While 1 in 17 white men can expect to go to prison in their lifetime, one in three black men can expect to be incarcerated.

The group’s report, which focuses especially on police brutality against black Americans as “reminiscent of the past racial terror of lynching,” makes 35 diverse recommendations, from establishing sovereign human rights commissions to the reinstatement of voting rights of former felons.

Yet critics question whether the liberal human rights paradigm can adequately address this kind of cruelty and oppression, originating as it does in 20th century Europe, where fascism had recently taken root, and in light of Europe’s own role in creating and perpetuating racial injustice.

“Not only is there no curriculum recognition about the real history of our country… but there’s also no cultural recognition,” -- Kesi Foster.

“In the era of the Atlantic slave trade,” says Andrew Johnson, Professor of African American Studies at Harvard University, “new notions of difference – absolute, racial notions of difference – were used to define, describe, and justify the political economy of slavery”, articulating the centrality of racism in capitalist exploitation.

Demands for reparations have been largely ignored in the political mainstream. A bill, HR-40, introduced in 1989 to establish a commission examining the “fundamental injustice, cruelty” and brutality of slavery has gained little traction – though the UN committee recommends its passage through Congress. Last year, then-presidential candidate democratic socialist Bernie Sanders dismissed the question of reparations saying that it wouldn’t get through Congress and would be “too divisive”.

Noting Sanders’ determination to push the boat out on issues of class, celebrated writer and proponent of reparations Ta-Nehisi Coates deplored this lack of political imagination: “I thought Sanders’s campaign might remind Americans that what is imminently doable and what is morally correct are not always the same things, and while actualising the former we can’t lose sight of the latter,” Coates said.

He urged that class-based solutions are inappropriate to address “racial plunder” – borne out by the fact that the median income for African American households ($36,898) is almost half their white counterparts ($62,950). The median value of total assets of black families, $4,900, versus white families, $97,000, reveals an even starker difference.

The Movement for Black Lives, a coalition of over 50 black-led organisations, has set out five key requests which would begin to restore what has been being stolen “since the time that the first black person was kidnapped from the shores of Africa,” in the words of Black Panther Angela Davis.

They focus especially on education, a particular site of harm since it was made illegal to teach enslaved people to read, a law which began in South Carolina in 1740 and was punishable by death in Louisiana. Since then, owing to redlining policies and explicit disinvestment in primarily-black schools, African Americans have continued to suffer from worse educational opportunities, with black students expelled at three times the rate of white students.

“You’re more likely to walk into your hallway and interact with a police officer – in a school – than a guidance counselor,” Kesi Foster, Coordinator at the Urban Youth Collaborative, and contributor to the policy recommendations for the Movement for Black Lives’ demand for reparations, told IPS, saying that in New York, there is one guidance counselor for every 322 students, but a police officer for every 192 students.

These officers are more prevalent in schools with metal detectors, which are usually primarily non-white. Describing what is often called the ‘school-to-prison pipeline’, Foster says that reparative justice could begin by defunding the COPS programme which stations police in schools in line with the perception that black and brown males are “inherently dangerous”.

After the end of the American Civil War in 1865, people who were formerly enslaved were given forty acres of tillable land – and, sometimes a mule. But after Abraham Lincoln’s assassination the same year, his successor Andrew Johnson reversed Lincoln’s directive for redistribution.

Calls for reparations have a long history proceeding from this date, and have tended to focus on material restitution, which makes the Movement for Black Lives’ emphasis on education salient. “Not only is there no curriculum recognition about the real history of our country… but there’s also no cultural recognition,” Foster says. “In Germany and other places… where really atrocious things have taken place, there are markers.”

They call for “mandated public school curriculums that critically examine the political, economic, and social impacts of colonialism and slavery, and funding to support, build, preserve, and restore cultural assets and sacred sites to ensure the recognition and honoring of our collective struggles and triumphs.”

It is clear that fulsome reparations for the continued atrocities perpetrated against people of African descent are not about to be freely given simply because whites are made to see the error of their ways. In the words of Mariame Kaba, organiser, educator and founder of Project NIA, speaking at a recent conference on the disproportionate effect the war on drugs has had on black communities, “the system can’t indict itself. You can’t think that the system that is killing you is going to save you.”

Kaba, who helped in the fight for plaintiffs’ justice in the Burge torture trials, discussed the extensive public apology that was eventually won by some of those Burge tortured, and the history’s inclusion in Chicago’s curriculums, demonstrating the essential role honest expressions of responsibility can play in processes of healing for black communities who have been brutalised by the state.

But the Movement’s foremost demand is for the “full and free access for all Black people (including undocumented and currently and formerly incarcerated people) to lifetime education” in its every form, including the “retroactive forgiveness of student loans”.

Professor Harold McDougall, who teaches law at Howard University, has, among many others, argued for the necessity of black-only education. McDougall would like to see Historically Black Colleges and Universities (HBCUs), like Howard, funded to set up “Reparations Academies” for the descendents of people who were “damaged by educational racism”. This is a practical measure as much as it compounds Stokely Carmichael and Charles Hamilton’s view that “group solidarity is necessary before a group can operate effectively from a bargaining position of strength”.

McDougall, like others in this struggle, wears two hats: “you have to be able to firmly advance your point of view in the governance process, but even at that time to have your feet firmly grounded in the community, so that the broad-base of the population is continually informing your sense of what needs to be done,” he told IPS.

“When this is going to happen is not something we’re necessarily wrestling with,” Foster says. “For me, it’s more important [to ask]… how does this struggle lead us forward in a way that’s actually transformational, and that’s actually trying to significantly change the material conditions that black people are living under, because of the way that the system was set up, which is to basically profit off of our bodies, profit off our labour, and then give nothing back to us,” citing Chicago’s victory as an example.

Taking a long view, McDougall says that “it’s important to look at these struggles as multi-generational – the problems were not created in a generation. It is unlikely, although not impossible, that they will be solved in your lifetime, so what you do is you roll the ball forward for as long as you can.”