The author of this article is a professor of the Javeriana University in Cali, Colombia. 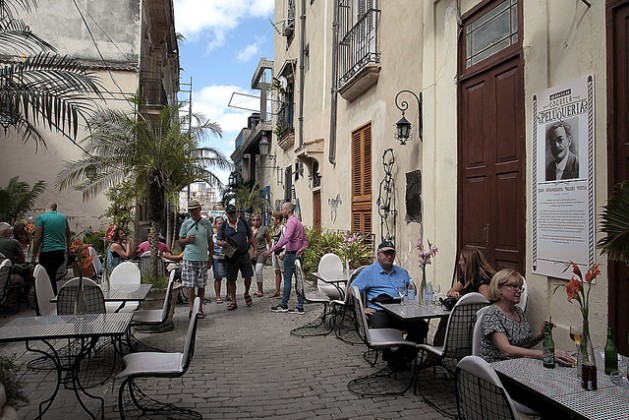 The boom in tourist arrivals, especially from the United States, like those sitting outside the restaurants in one of Havana’s streets, has been insufficient to avoid Cuba’s recession during 2016. Credit: Jorge Luis Baños/IPS

CALI, Colombia, Jan 13 2017 (IPS) - The macroeconomic data for the close of the year provided by the Cuban government confirms the projections that Cuba would enter a recession as a result of the Venezuelan shock.

In 2016 the production of goods and services decreased by 0.9 per cent. This is the first economic recession since 1993, when the gross domestic product (GDP) dropped 15 per cent after the disappearance of the Soviet Union.

Since late 2014, after the dramatic oil price drop and the subsequent crisis of the Venezuelan economy, the Cuban recession was highly likely, if we add an insufficient response of the Cuban economic policy in the face of the magnitude of the shock that was approaching.

Relations with Venezuela are formed under very singular agreements between both governments, with prices and financial facilities that are distant from the usual practices in international trade.

Therefore, it’s not simply a question of seeking new markets for the trade that can no longer be carried out with Venezuela, but rather it has to be done in a different way and boosting new economic sectors given that it seems rather improbable that someone else will receive Cuban doctors and sell us cheap oil under the same conditions.

That is why it was so important to start as soon as possible the diversification of international relations and the liberalisation of the domestic capacities in search of increased productivity and greater efficiency in national production. The attraction on a large scale of foreign investment, the devaluation of the official exchange rate and the monetary convergence, a more in-depth reform of state enterprise and the expansion of spaces for the private sector and the cooperatives were some of the steps that seemed feasible and coherent with the reforms already initiated.

Why were some or all these steps not taken? Multiple explanations can be offered.

Because there isn’t clarity or conviction about where the Cuban economic model should be directed. Because the forces resisting the changes have won the game for the time being. Because the need for so many changes surpasses the institutional and technical capacity to manage them all at the same time. Because the U.S. embargo continues preventing the arrival of institutional foreign investors. Because it is really believed that a very slow reform and making experiments is the only effective means. And surely some other explanations could be added.

No matter the reason, the final result is that the reforms have slowed down instead of being speeded up, and after 10 years there are no very encouraging results when examining productivity, the mean wage or a specific sector like agriculture.

The announcements of new transformations are increasingly more dilated. Cuba seems to be living in a different time dimension; it is as if one year in Cuba is equivalent to a month in the rest of the planet.

However, the space in which the economy operates is not isolated, it competes with other destinations for international capital, it is technologically backward, it loses relative weight in the region and suffers the cycles of the international markets and the crisis of its principal economic allies. Perspectives for 2017 and the role of public bonds

This GDP growth for 2017 is based on two essential factors. First, the hope that the Venezuelan economic situation improves after the recent increases in the price per barrel of oil; and second, the Cuban government is putting into practice an anti-cyclical expansive fiscal policy.

In his December 27 speech at the National Assembly, Economy and Planning Minister Ricardo Cabrisas stated that “The projections of the energy sources for next year allow for backing similar levels as those of 2016….”

It is very probable that this perspective has as its point of departure the increase presented in the price per barrel of oil during the last three quarters and some international projections that place it at higher levels for 2017, which favours the performance of the Venezuelan economy and opens the possibility that the sending of oil to the island and the payments for Cuban medical services will be stabilised.

On the other hand, an increase in public spending and the fiscal deficit is projected to back the GDP growth. An 11 per cent increase in fiscal spending has been planned, but it will not be able to be covered by the fiscal incomes, which is why it will generate a “fiscal hole” of 11.5 billion pesos in 2017, which represents a value equivalent to 12 per cent of the GDP.

In terms of percentages it is the highest fiscal deficit since 1993; in shares it more than doubles the deficit of 1993 which was five billion pesos.

It is favourable that after years of fiscal austerity the government has decided to expand public spending to cushion the recessive effect of the Venezuelan crisis. It is valid to apply an expansive fiscal policy at a time of a GDP drop.

It is also correct to finance the fiscal deficit with the emission of public bonds, which the Cuban state banks will purchase. This is a new instrument that the Finances and Prices Ministry has been introducing for two years with a view to avoiding the monetisation (printing of new money) as a mechanism for the financing of the fiscal deficit.

This fiscal financing mechanism tends to approach international practices, and its principal advantage is to avoid an increase in the primary amount of money, with which inflationary pressures are reduced.

Where are the risks of the expansive fiscal policy and the emission of bonds?

Firstly, the fiscal deficit can grow in times of crisis, but must not do so disproportionately or keep being indefinitely high. It is right to apply an anti-cyclical fiscal policy, but having a fiscal hole of 12 per cent of the GDP in 2017 creates doubts about the financial sustainability of the entire financing mechanism that is being put into practice. To have a point of comparison, it is expected that the countries conserve, in an average of several years, a fiscal deficit of less than three per cent of the GDP.

Secondly, the emission of public bonds reduces the inflationary effects but does not eliminate them completely. The expansion of the fiscal spending by 11.5 billion pesos over the incomes can put pressure on the increase of prices given the disproportionate expansion that it is activating in the demand for goods and services.

Thirdly, Cuba does not have a fiscal regulation that organises and places limits on the long-term fiscal balance (as other countries in the region have), but rather it depends on the government’s discretion each year. That is to say, we don’t know what is going to happen with the fiscal deficits in the future. We are not sure that the bonds being issued and the next ones that will be issued will be managed adequately to guarantee the sustainability of the entire mechanism.

It should be taken into account that the banks are using family savings to buy public bonds, therefore the government has the responsibility of obtaining future fiscal incomes and balance the public accounts to comply with the commitments made to the banks and, ultimately, to the holders of savings accounts.

To have an idea of the magnitude of the deficit and the resulting emissions of public bonds, we see that in 2015 family savings in the banks amounted to 23.68 billion Cuban pesos.

Therefore, the budgeted fiscal deficit for 2017 is equivalent to 48 per cent of the value of family savings accounts. The banks certainly also have enterprises’ deposits and their own capital. Even so, this proportion of 48 per cent calls attention to the little financing space that the Finances and Prices Ministry would have in the future to support high fiscal deficits.

In short, the two per cent projected growth for 2017 in the Cuban economy depends on a situation that continues to be uncertain for the Venezuelan economy, despite the increase in oil prices. In addition, it is accompanied by an expansive fiscal policy that if well used can help manage the crisis, but if not, would have disastrous consequences for the country’s monetary and financial stability.

The activation of an anti-cyclical fiscal policy and emission of public bonds is a correct step, but a fiscal deficit that is equivalent to 12 per cent of the GDP and 48 per cent of the family bank savings seems exaggerated.

It would not be possible to repeat the fiscal expansion in 2018; rather, it would be indispensable to make a fiscal adjustment that decreases significantly the deficit in the coming years.

Therefore, the government is only gaining one year of time, in which it must apply some of the pending and necessary structural reforms to firmly take the economy out of the recession.