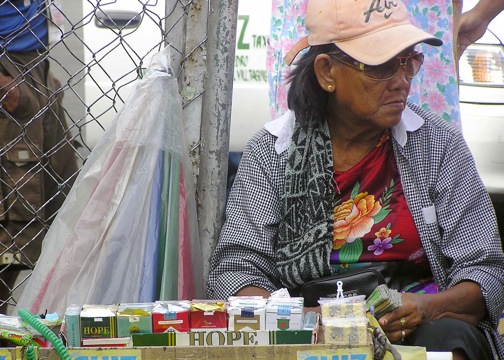 Yet, according to new wide-ranging research published by the World Health Organization (WHO), tobacco companies are misleading governments, telling them that tobacco regulations will potentially harm their economies.

The research was compiled in a new monograph titled The Eonomics of Tobacco and Tobacco Control, published jointly by the WHO and the National Cancer Institute of the US-based National Institutes of Health.

Frank Chaloupka, who edited the monograph, told IPS that when low and middle income countries do implement regulations, there is usually a much bigger pay off.

“We present some new evidence in the monograph on tobacco advertising bans that shows they have a bigger effect in low- and middle-income countries than they do in high-income countries,” said Chaloupka who is also Distinguished Professor of Economics & Public Health at the University of Illinois.

“I think it’s partly because of the fact that in a lot of low- and middle-income countries they haven’t been exposed to the same information about the health consequences of tobacco use, people are more susceptible to the industry(’s positive) portrayals of tobacco,” noted Chaloupka.

“People can really see the damage caused by tobacco through the graphic warnings.” For those who have had less exposure to these warnings from other sources of information, the warnings have an even bigger impact.

Taxes on tobacco sales in low and middle countries also have a bigger impact than in high-income countries, Chaloupka added.

“Given people’s lower incomes, people are more responsive to changes in the price,” he said.

There are several reasons why low- and middle-income countries have less tobacco regulations than high-income countries, said Chaloupka, but one problematic cause is misleading arguments made by the industry:

While some low and middle-income countries may lack the capacity to implement complex regulations, Chaloupka noted that often simpler policies can be more effective.

“The Philippines (had) a complicated tax system where we had different rates on different brands,” he said. “Over time they moved toward a significant reform in their system and they’re in the process of moving to a single uniform tax which is a lot easier to administer and much better at deterring tax avoidance and tax evasion.”

However although so-called excise taxes on tobacco products can act as a deterrent worldwide they are far from helping governments recoup the costs of tobacco use to economies and society.

“The estimate we have for the global cost is about $1.4 trillion, and less than $300 billion being generated in tax revenues,” said Chaloupka, adding that less than $1 billion of tobacco-related tax revenues is being used for tobacco control.

Chaloupka also pointed to Turkey as an example of a middle-income country that has successfully regulated tobacco use.

“If you go back a few decades the Turkish government used to be the tobacco industry in Turkey. They used to be one of the biggest growers of tobacco leaf in the world, and over time they’ve completely moved in the other direction.”

“They privatised their tobacco industry (and) they didn’t make any promises to the tobacco companies that moved into their markets, and really then did move forward with strong tobacco control policies.”

Correction: An earlier version of this article referred to “$300 million being generated in tax revenues” and “$1 million of tobacco-related tax revenues…” it should have read billion(s) not million(s).