IBADAN, Nigeria, Mar 29 2017 (IPS) - The role of genetic engineering in agriculture and food has generated enormous interest and controversies, with large-scale embrace by some nations and wholesale bans by others. 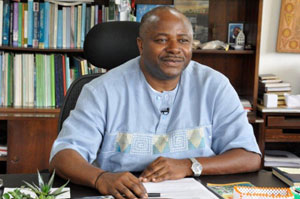 Many studies have been done and much research remains to be done on the impact genetically modified organisms (GMO) can have on broader food systems.

Fast-moving developments, however, suggest that lines drawn in the sand both for or against the broader use of GMOs risk becoming a distraction, particularly in Africa.

The major novelty is the emergence of CRISPR, which stands for “Clustered regularly interspaced short palindromic repeats” and is popularly called “genome editing”, which amounts to a much faster way to alter genomes. The method sharply lowers costs and amounts to a revolution for seeds.

The second development springs from the first: Genetic engineering can now be deployed on a far vaster array of organisms, and with more bespoke goals such as drought resistance or nutritional enhancement. Many GMOs in the market are for insect and/or herbicide resistance, as has been the case for many biotechnology products of the past.

While formulating national policies on GMOs is the responsibility of governments, informed debate entails that we recognize these developments change the game.

The International Institute of Tropical Agriculture,– and the Food and Agriculture Organization considers biotechnologies as potential tools in the toolbox, meaning they may be appropriate. Our primary interest is in boosting food production, food security, nutrition, climate resilience, and rural employment.

At any rate, vast monocultures of cash crops such as maize, soy and cotton – the main GMO varieties in the world today – are not our utmost priority. But CRISPR and related new approaches open the door to many more applications.

To cite a few examples, all very recent: Researchers have developed a transgenic maize variety that keeps aflatoxin out of kernels, thus tackling one of the world’s single-largest food problems and source of farm-based agriculture loss.

Elsewhere, scientists in Ghana have developed a GM cowpea that survives pests – or needs less pesticide – is advanced and might be available at a commercial scale as early as next year. Currently, the Maruca pod-borer destroys a hefty share – often more than half – of cowpeas grown in West Africa.

Or take cassava, which is one of IITA’s favorite crops and is the second-most important source of calories consumed in sub-Saharan Africa. A recent exploratory review found 14 potential genetic pathways that could improve the crop’s yield which has proven stubbornly stable for decades. One of them involved optimizing the plant’s photosynthesis in the same way that has worked well with tobacco and other plants. The goal is to adjust the plant’s canopy so that more of its energy goes into actual storage roots rather than stems. Another potential path is to tweak the cassava so that it can thrive better in soils with lower phosphorus, to which it is notably more sensitive than other major staple crops.

Working with Nigeria’s National Root Crop Research Institute, IITA is conducting research on a disease-resistant cassava with higher vitamin A content. Nigeria is also running confined field tests for GMO sorghum fortified to produce more iron, zinc, protein and vitamin A and to demonstrate greater nitrogen efficiency while growing. These and other hypothetical developments – think salt-tolerant rice, or zinc-enhanced cassava, or zinc and iron-fortified pearl millet – may warrant pursuit.

Opposition in the past has come for a host of reasons, including fears that GMO crops required expensive inputs provided by multinationals and posed environmental risks as they were often designed to be resistant to herbicides. Many of the new proposals come without such baggage, suggesting the policy debate will change.

Norway has adopted an interesting regulatory approach to genetic engineering, which requires safety reviews, farmer consultations, and a litmus test of whether alternatives contribute better to sustainable agricultural practices. That’s a far cry from the usually binary debate – stoked by stories about creating designer human babies – about GMOs.

The subject matter is complex and the science even more so. It appears we are on the brink of a deluge of new discoveries – engineering beneficial soil microbes may soon be a booming research arena – many of which may not need the kind of capital-intensive agricultural operations where GMOs were first developed and can instead directly address the needs of smallholders in developing countries and the specific food and nutrition security and climate change challenges they face.

Genome editing can now economically be applied to the crop cultivars that farmers in a given locale prefer, consisting of highly targeted interventions that can address specific challenges, and don’t take years of breeding to consolidate.

It’s a new world. Let’s have a new debate, not the old one.