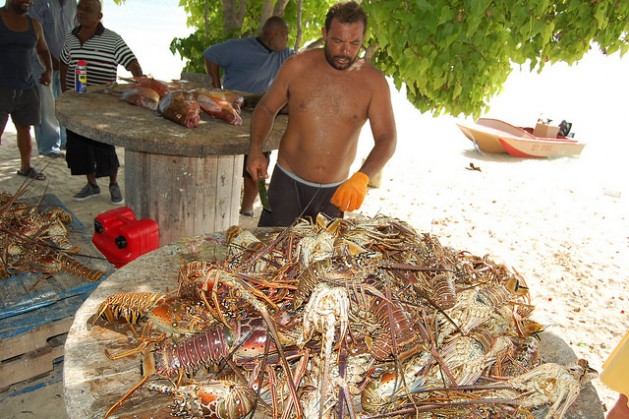 In the Turks and Caicos, the government is searching for new ways to manage the conch and lobster populations. Credit: Zadie Neufville/IPS

KINGSTON, Jamaica, Apr 28 2017 (IPS) - Caribbean scientists say fishermen are already seeing the effects of climate change, so for a dozen or so years they’ve been designing systems and strategies to reduce the impacts on the industry.

While some work on reef gardens and strategies to repopulate over fished areas, others crunch the data and develop tools designed to prepare the region, raise awareness of climate change issues and provide the information to help leaders make decisions.

As the oceans absorb more carbon, the region’s supply of conch and oysters, the mainstay of some communities, is expected to decline further.

In December 2017, the Caribbean Regional Fisheries Mechanism (CRFM) secretariat, with funding from the UK government, announced a Climate Report Card to help formulate strategies to lessen the impact of climate change on regional fisheries.

“The CRFM is trying to ensure that the issue of climate change as it relates to the fisheries sector comes to the fore… because the CARICOM Heads of Government have put fish and fishery products among the priority commodities for CARICOM. It means that things that affect that development are important to us and so climate change is of primary importance,” said Peter Murray, the CRFM’s Programme Manager for Fisheries and Development.

The grouping of small, developing states are ‘fortifying’ the sectors that rely on the marine environment, or the Blue Economy, to withstand the expected ravages of climate change which scientists say will increase the intensity of hurricanes, droughts, coastal sea level rise and coral bleaching.

In its last report AR5, the Intergovernmental Panel on Climate Change (IPCC) reported: “Many terrestrial, freshwater and marine species have shifted their geographic ranges, seasonal activities, migration patterns, abundances and species interactions in response to ongoing climate change,” patterns that are already being noted by Caribbean fishers.

In an email to IPS, Murray outlined several initiatives across the Caribbean that ,he says are crucial to regional efforts. The Report Card, which has been available since March, will provide the in-depth data governments need to make critical decisions on mitigation and adaptation. It provides information covering ocean processes such as ocean acidification; extreme events like storms, surges and sea temperature; biodiversity and civil society including fisheries, tourism and settlements.

In addition, the 17-members of the CRFM agreed to incorporate the management of fisheries into their national disaster plans, and signed off on the Climate Change Adaptation and Disaster Risk Reduction Strategy for the fisheries sector.

“It means that anything looking at climate change and potential impacts is important to us,” Murray says.

The IPCC’s gloomy projections for world fisheries has been confirmed by a 2015 World Wildlife Fund (WWF) report indicating that for the last 30 years, world fisheries have been in decline due to climate change. In the Caribbean, reduced catches are directly impacting the stability of entire communities and the diets and livelihoods of some of the region’s poorest. Further decline could devastate the economies of some islands.

But even as climate change is expected to intensify the effects of warming ocean waters, pelagic species could avoid the Caribbean altogether, bringing even more hardships. So the regional plan is centred on a Common Fisheries Policy that includes effective management, monitoring and enforcement systems and tools to improve risk planning.

In addition to the disaster plan and its other activities, the Community has over time installed a Coral Reef Early Warning System; new data collection protocols; improved computing capacity to crunch climate data; an insurance scheme to increase the resilience of fishing communities and stakeholders; as well as several tools to predict drought and excessive rainfall.

Worldwide, three billion people rely on fish as their major source of protein. The industry provides a livelihood for about 12 per cent of the world’s population and earns approximately 2.9 trillion dollars per year, the WWF reports. With regional production barely registering internationally, the Caribbean is putting all its efforts into preserving the Blue Economy, which the World Bank said earned the region 407 billion dollars in 2012.

In the coming weeks the Caribbean Community Climate Change Centre, known regionally as the 5Cs, has coordinated and implemented a raft of programmes aimed at building systems that will help the region cope the effects of climate change.

Through collaboration with the US National Oceanic and Atmospheric Administration (NOAA), the 5Cs has been setting up an integrated network of climate and biological monitoring stations to strengthen the region’s early warning mechanism.

And as the oceans absorb more carbon, the region’s supply of conch and oysters, the mainstay of some communities, is expected to decline further. In addition, warming sea water is expected to shift migration routes for pelagic fish further north, reducing the supply of available deep sea fish even more. Added to that, competition for the dwindling resources could cause negative impacts of one industry over another.

But while scientists seek options, age-old traditions are sometimes still pitted against conservation projects. Take an incident that played out in the waters around St. Vincent and the Grenadines a few weeks ago when whale watchers witnessed the harpooning of two orcas by Vincentian fishermen.

The incident forced Prime Minister Ralph Gonsavles to announce the end of what was, until then, a thriving whaling industry in the village of Barouille. For years, government turned a blind eye as fishermen breached regional and international agreements on the preservation of marine species. The continued breaches are also against the Caribbean Community’s Common Fisheries Policy that legally binds countries to a series of actions to protect and preserve the marine environment and its creatures.

On April 2, five days after the incident, Gonsalves took to the airwaves to denounce the whaling caused by “greed” and announce pending regulations to end fishing for the mammals. The incident also tarnished the island’s otherwise excellent track record at climate proofing its fishing industry.

Murray’s email on regional activities outlines SVG activities including the incorporation of the regional strategy and action plan and its partnership with several regional and international agencies and organisations to build resilience in the marine sector.

Over in the northern Caribbean, traditions are also testing regulations and international agreements. In Jamaica, the Sandals Foundation in association with major supermarket chains has launched a campaign to stop the capture and sale of parrotfish for consumption.

Scientists say that protecting the parrot is synonymous with saving the reefs and mitigating the effects of climate change. And further north in the Turks and Caicos, the government is searching for new ways to manage the conch and lobster populations. While trade is regulated, household use of both, sea turtles, and some sharks remain unregulated; and residents are resistant to any restrictions.

And while many continue to puzzle about the reasons behind the region’s climate readiness, scientists caution that there is no time to ease up. This week they rolled out, among other things, a coastal adaptation project and a public education and awareness (PAE) programme launched on April 26 in Belize City.

The PAE project, named Feel the Change, is funded by the United Nations Development Programme (UNDP) and Japan-Caribbean Climate Change Project (J-CCCP) public awareness programme. Speaking at the launch, project development specialist at 5Cs Keith Nichols pointed to the extreme weather events from severe droughts to changes in crop cycles, which have cost the region billions.

“Climate change is not just sea level rise and global warming; climate change and climate variability is all around us,” he said.