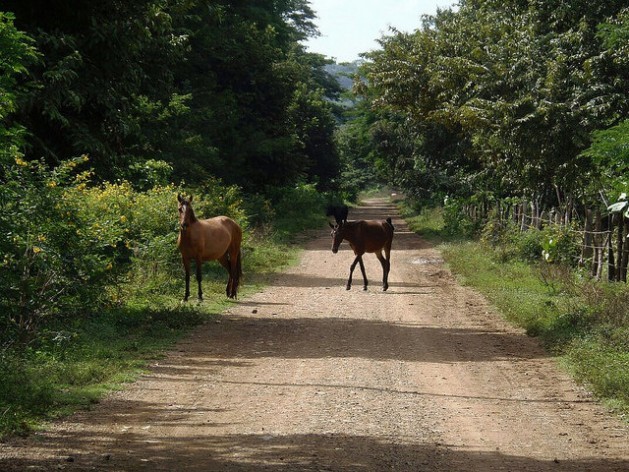 In April 2017, three years after this road was created to mark the official start of the construction of the Great Nicaraguan Interoceanic Canal in Brito, on the country’s Pacific ocean western coast, it remains unpaved, and is only used by horses from nearby farms. Credit: José Adán Silva/ IPS

PUNTA GORDA/BRITO, Nicaragua, Apr 25 2017 (IPS) - Less than three years from the projected completion in Nicaragua of a canal running from the Caribbean Sea to the Pacific Ocean, there is no trace of progress on the mega-project.

IPS traveled to both ends of the routet: Bluefields, on the Caribbean coast in eastern Nicaragua, 383 km from Managua, and Brito, on the Pacific coast in the southern department of Rivas, 112 km from the capital.

In the South Caribbean Coast Autonomous Region, IPS traveled by boat from Bluefields, the regional capital, to the town of Punta Gorda to the south.

“About two years ago, foreigners used to come and travel around by helicopter and boat from the mouth of the Punta Gorda River all the way upstream. They were escorted by the army and would not talk with anyone, but they have not returned." -- Anonymous indigenous leader

According to the plans of the Hong Kong Nicaragua Canal Development (HKND) group, in charge of the project to build the Great Nicaraguan Interoceanic Canal, in this sparsely populated jungle area bordering the territory of the Rama indigenous people, a deep-water harbour must be built, as well as the first locks on the Caribbean end for the ships that cross to or from the Atlantic Ocean.

The entire Great Canal project, according to HKND, is to include six sub-projects: the canal, the locks, two harbours, a free trade zone, tourist centres, an international airport, and several roads.

Other connected works are a hydroelectric power plant, a cement factory, and other related industrial facilities to ensure the supply of materials and the successful completion of the canal in five years, counting from 2014, when the project officially got underway.

But in Punta Gorda there are no infrastructure works, no HKND offices, and among the local population nobody is willing to openly talk about the subject.

“The silence is a matter of caution, people think you might be a government agent,” a local indigenous leader of the Rama and Kriol Territorial Government (GTR-K), an autonomous organisation of indigenous communities that own the lands that will be affected by the canal, told IPS on condition of anonymity.

In the days prior to IPS’ visit to the region, army troops and the police carried out operations against drug trafficking, and there was an overall sense of apprehension.

The members of the GTR-K are divided between supporting and opposing the project, but negotiations with the government representatives have been tense and conflict-ridden, to the extent that complaints by the local indigenous people demanding respect for their ancestral lands have reached the Washington-based Inter-American Commission on Human Rights.

“About two years ago, foreigners used to come and travel around by helicopter and boat from the mouth of the Punta Gorda River all the way upstream. They were escorted by the army and would not talk with anyone, but they have not returned,” said the indigenous leader of this remote territory that can only be accessed by boat or helicopter.

Silence on the subject is not just found among the locals. There is no talk anymore at a government level about what was once a highly touted project. 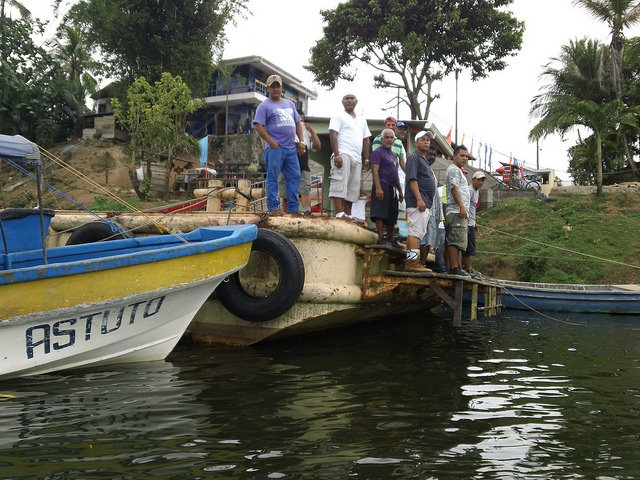 Fishermen and stevedores on one of the docks on the Punta Gorda River, near where it runs into the Caribbean Sea, the projected Caribbean extreme of the interoceanic canal, where local residents have not seen any visible sign of progress on the works officially launched more than two years ago. Credit: José Adán Silva/ IPS

However, Vice President Rosario Murillo, the chief spokesperson of the government of her husband Daniel Ortega, president of Nicaragua since 2007, announced this month that with Taiwan’s support, a deep-water harbour, not connected to the plan for the canal, would be built in the same area with an investment that has not yet been revealed.

María Luisa Acosta, coordinator of the Legal Aid Centre for Indigenous Peoples, told IPS that the Special Law for the Development of Infrastructure and Transportation in Nicaragua Relating to the Canal, Free-Trade Areas and Associated Infrastructure, known as Law 840, was passed in June 2013 without consulting local indigenous and black communities.

A year later, on July 7, 2014, HKND and the Nicaraguan government announced the route that had been chosen for the canal, running from the Rivas Isthmus across Lake Cocibolca, also known as Lake Nicaragua, to Punta Gorda.

The route would negatively affect the indigenous communities of Salinas de Nahualapa, Nancimí, Veracruz del Zapotal, Urbaite de las Pilas and San Jorge Nicaraocalí, along the Pacific, while in the Caribbean region it would impact the Creole communities of Monkey Point and Punta Gorda, as well as the Rama people of Wiring Kay, Punta de Águila and Bangkukuk Tai, home to the last speakers of the Rama language.

According to leaders of different indigenous communities, government representatives began to pressure them to give their consent over their lands to allow the canal to be built, giving rise to a still lingering conflict.

It was to be built by the end of 2019, at a cost of over 50 billion dollars – more than four times the GDP of this Central American country of 6.2 million people, 40 per cent of whom live in poverty.

The construction of a harbour, the western locks and a tourist complex is projected in Brito, a town on the Pacific coast in the municipality of Tola.

The town is named after the Brito River, a natural tributary of Lake Cocibolca, which winds through the isthmus until flowing into the Pacific Ocean. The works were officially inaugurated in Brito in December 2014.

The president of HKND, Wang Jing, together with Nicaraguan government officials, appeared in the media next to the construction equipment to inaugurate the work on a 13-km highway, which would be used to bring in the heavy machinery to build the initial infrastructure.

It was the last time Wang was seen in public in Nicaragua.

There is no new paved highway, just a dirt road which in winter is difficult to travel because it turns into a muddy track.

No heavy machinery is in sight, or vehicular traffic, workers or engineering staff.

Here, as in Punta Gorda, people avoid talking about the canal, and if they do it is on condition of anonymity and in a low voice.

“In Rivas we drove out the Chinese with stones when they tried to come to measure the houses, and after that, the police harassed us. They disguised themselves as civilians – as doctors, vendors and even priests, to see if we were participating in the protests,” said one local resident in Brito, who was referring to the 87 protest demonstrations held against the canal in Nicaragua.

In Managua, Telémaco Talavera, the spokesman for the state Commission of the Great Nicaraguan Interoceanic Canal, said briefly to a small group of journalists, including IPS, that studies on the canal continue and that “the project is moving ahead as planned.”

However, Vice President Murillo announced in January that a 138-km coastal highway would be built along the Rivas Isthmus, to cater to the tourism industry and improve transportation, at a cost of 120 million dollars – with no mention of the canal.

One month later, government machinery was moved to Rivas to begin building the road where the canal was supposed to go.