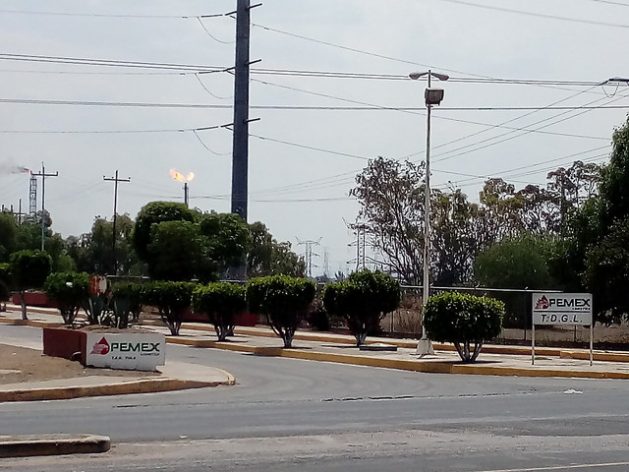 MEXICO CITY, Jul 8 2017 (IPS) - Mexico is in transition towards commercial exploitation of its shale gas, which is being included in two auctions of 24 hydrocarbon blocks, at a time when the country is having difficulty preventing and reducing industrial methane emissions.

Increasing atmospheric release of methane, which is far more polluting than carbon dioxide (CO2) and which is emitted along the entire chain of production, is threatening the climate goals adopted by Mexico within the Paris Agreement which aims to contain global warming.

“Shale gas is the last gas that is left to exploit after reserves that are easier to access have been used up. Its production entails higher economic, environmental and energy costs. It is practically impossible for a shale gas well to be non-polluting,” researcher Luca Ferrari, of the Geosciences Institute at the state National Autonomous University of Mexico (UNAM) told IPS.

The state-run but autonomous National Hydrocarbons Commission (CNH) issued a resolution on Jun. 22 calling for bids for the two auctions of 24 blocks of gas and oil in five basins, located in the north, southeast and south of the country. For the first time, shale gas reserves are included. Bidding will take place on Jul. 12, and total estimated reserves of 335 million barrels are being offered.

By refraining from producing non-conventional fuels (like shale gas) itself, the government is partially opening the energy sector to participation by private enterprise to supply the country’s industrial gas needs.

Mexico’s energy reform, introduced in August 2014, opened up exploitation, refining, distribution and sales of hydrocarbons, as well as electricity generation and sales, to national and foreign private sectors.

In shale gas deposits, hydrocarbon molecules are trapped in sedimentary rocks at great depths. Large quantities of a mixture of water, sand and chemical additives, which are harmful to health and the environment, have to be injected to recover shale gas and oil.

The “fracking” technique used to free shale gas and oil leave huge volumes of liquid waste that has to be treated for recycling, as well as methane emissions that are more polluting than CO2, the greenhouse gas responsible for most global warming.

However CNH quotes more moderate estimates of probable reserves, of the order of 81 trillion cubic feet.

“Current regulations are based on best practices, but the philosophy of environmental protection has been abandoned. Exploitation is deepening inequities in a negative way, such as environmental impact. It is irresponsible to auction reserves without a proper evaluation of environmental and social impacts,” researcher Ramón Torres, of UNAM’s Development Studies Programme, told IPS.

In March, the national Agency for Industrial Safety and Environmental Protection, responsible for regulating the hydrocarbons sector, published a regulatory package on exploitation and extraction of non-conventional reserves.

The regulations identify the risks of fracking fluid leaks, heightened demand for water, pollution caused by well emissions of methane and other volatile organic compounds, pollution caused by toxic substance release and by the return of injected fluid and connate water to ground level from the drill hole.

The regulations indicate that 15 to 80 percent of fracking fluid returns to the surface, depending on the well. As for atmospheric pollutants, they mention nitrogen oxides, benzene, toluene, methane and coal.

Measures are imposed on companies, such as verifying the sealing of wells, applying procedures for preventing gas leaks, and disclosing the composition of drilling fluids. Gas venting is prohibited, and burning is restricted.

Since 2003, Petroleos Mexicanos (PEMEX) has used hydraulic fracking – applicable not only to shale extraction – to drill at least 924 wells in six of the country’s 32 states, according to CartoCritica, a non-governmental organisation. At least 28 of these were confirmed to be of non-conventional crude.

Within this context, Mexico faces problems in reducing methane emissions.

In 2013 the country emitted 126 million tonnes of methane into the atmosphere, of which 54 million were from the stock rearing sector, 31 million from oil and gas, and 27 million from waste products. The rest was from electricity generation, industry and deforestation. Use of gas for electricity generation contributed at least 0.52 million tonnes.

Pemex Exploration and Production, a subsidiary of the state PEMEX group, reported that in 2016 its total methane emissions were 641,517 tonnes, 38 percent higher than the previous year.

In 2016, PEMEX changed the way it reported emissions of CO2 and other greenhouse gases (GHG). Previously these volumes were reported by production region, making comparative analysis difficult.

In 2015, the Northeast Marine Region comprising the Gulf of Mexico, where the largest underwater oil deposits are located, emitted 287,292 tonnes.

The emissions reduction was presumably associated with reduced fossil fuel production due to a fall in international prices and PEMEX’s own lack of financial resources.

But between 2012 and 2014 emissions increased by 329 percent, leaping from 141,622 tonnes to 465,956 tonnes, presumably because of increased venting and burning of gas (whether or not associated with crude oil wells). PEMEX lacked the technology for gas recovery.

In Ferrari’s view, the problem is a technical and economic one. “The first step is to prevent venting,” but that requires investment, he said.

According to the Global Gas Flaring Reduction Partnership (GGFR) led by the World Bank, in 2015 Mexico burned 5 billion cubic metres of gas, putting it in eighth place in the world, the same as for venting intensity, the relation between cubic metres of gas burned to barrels of oil produced.

The aim of the GGFR is to eradicate such practices by 2030.

Mexico is one of 24 goverrnments participating in the initiative, together with French Guiana and Peru in the Latin American region. Thirty-one oil companies – not including PEMEX – and 15 multilateral financial institutions are also involved. The World Bank will publish its first report on burning and venting gas this year.

Torres and Ferrari agree that the volume of gas produced by hydraulic fracking will not be sufficient to satisfy domestic demand.

“The volume that can be exploited is small and insufficient,” said Torres. Ferrari’s calculations indicate that shale gas would only supply domestic needs for 10 months.

In the same month, the Energy Ministry updated its Five Year Plan for Oil and Gas Exploration and Extraction 2015-2019 and set a new target to auction reserves of nearly 31 billion barrel equivalents of non-conventional fuels.