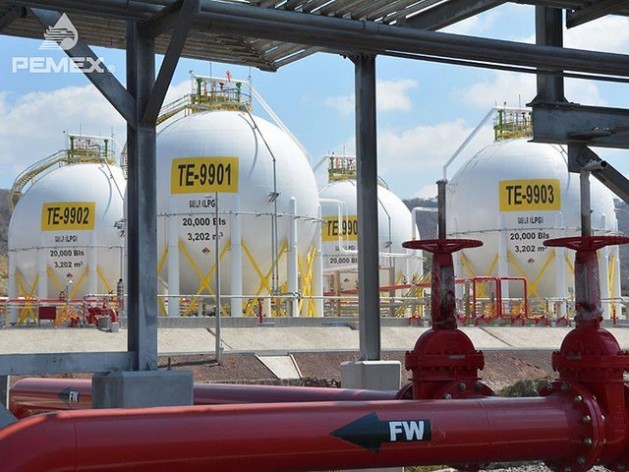 MEXICO CITY, Jun 26 2015 (IPS) - “People don’t know what ‘fracking’ is and there is little concern about the issue because it’s not visible yet,” said Gabino Vicente, a delegate of one of the municipalities in southern Mexico where exploration for unconventional gas is forging ahead.

Vicente is a local representative of the community of Santa Úrsula in the municipality of San Juan Bautista Tuxtepec, some 450 km south of Mexico City in the state of Oaxaca, where – he told IPS – “fracking is sort of a hidden issue; there’s a great lack of information about it.”

Tuxtepec, population 155,000, and another Oaxaca municipality, Loma Bonita, form part of the project Papaloapan B with seven municipalities in the neighbouring state of Veracruz. The shale gas and oil exploration project was launched by Mexico’s state oil company, Pemex, in 2011.

Papaloapan B, backed by the governmental National Hydrocarbons Commission (CNH), covers 12,805 square kilometres and is seeking to tap into shale gas reserves estimated at between 166 and 379 billion barrels of oil equivalent.

The project will involve 24 geological studies and the exploratory drilling of 120 wells, for a total investment of 680 million dollars.

But people in Tuxtepec have not been informed about the project. “We don’t know a thing about it,” said Vicente, whose rural community has a population of 1,000. “Normally, companies do not provide information to the local communities; they arrange things in secret or with some owners of land by means of deceit, taking advantage of the lack of money in the area.”

Shale, a common type of sedimentary rock made up largely of compacted silt and clay, is an unconventional source of natural gas. The gas trapped in shale formations is recovered by hydraulic fracturing or fracking.

Fracking involves the massive pumping of water, chemicals and sand at high pressure into the well, a technique that opens and extends fractures in the shale rock deep below the surface, to release the natural gas on a massive scale. 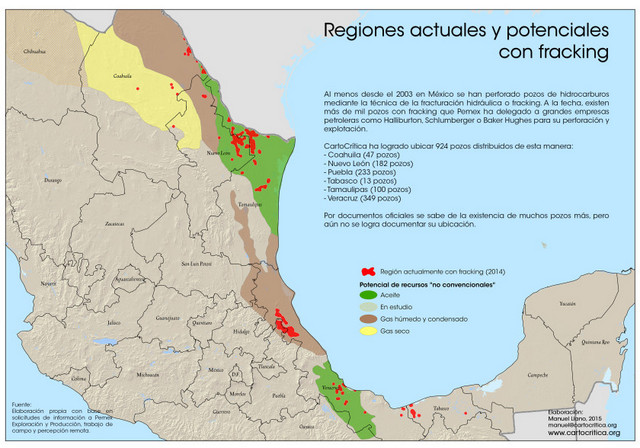 A map of the areas of current or future fracking activity in Mexico, which local communities say they have no information about. Credit: Courtesy of Cartocrítica

Fracking is quietly expanding in Mexico, unregulated and shrouded in opacity, according to the non-governmental Cartocrítica, which says at least 924 wells have been drilled in six of the country’s 32 states – including 349 in Veracruz.

But in 2010 the study “Proyecto Aceite (petróleo) Terciario del Golfo. Primera revisión y recomendaciones” by Mexico’s energy ministry and the CNH put the number of wells drilled using the fracking technique at 1,323 in Veracruz and the neighbouring state of Puebla alone.

In the northeastern state of Tamaulipas, where 100 wells have been drilled, Ruth Roux, director of the Social Research Centre of the public Autonomous University of Tamaulipas, found that farmers who have leased out land for fracking knew nothing about the technique or its effects.

“The first difficulty is that there is no information about where there are wells,” Roux told IPS. “Farmers are upset because they were not informed about what would happen to their land; they’re starting to see things changing around them, and they don’t know what shale gas or fracking are.”

While producing the study “Diagnosis and analysis of the social impact of the exploration and exploitation of shale gas/oil related to culture, legality, public services, and the participation of social actors in the states of Coahuila, Nuevo León and Tamaulipas”, Roux and her team interviewed five sorghum farmers and two local representatives from four municipalities in Tamaulipas.

The researcher said the preliminary findings reflected that locals felt a sense of abandonment, lack of respect, lack of information, and uncertainty. There are 443 homes near the 42 wells drilled in the four municipalities.

The industry sees the development of shale gas as strategically necessary to keep up production levels, which in April stood at 6.2 billion cubic feet per day.

By 2026, according to Pemex projections, the country will be producing 11 billion cubic feet of gas, 45 percent of which would come from unconventional deposits.

The company has identified five basins rich in shale gas in 11 states.

For the second half of the year, the CNH is preparing the tender for unconventional fossil fuel exploitation, as part of the implementation of the energy reform whose legal framework was enacted in August 2014, opening up electricity generation and sales, as well as oil and gas extraction, refining, distribution and retailing, to participation by the domestic and foreign private sectors.

The historic energy industry reform of December 2013 includes nine new laws and the amendment of another 12.

The new law on fossil fuels leaves landowners no option but to reach agreement with PEMEX or the private licensed operators over the occupation of their land, or accept a court ruling if no agreement is reached.

Vicente said the law makes it difficult for communities to refuse. “We are worried that fracking will affect the water supply, because of the quantity of water required and the contamination by the chemical products used. When we finally realise what the project entails, it’ll be a little too late,” he said.

Local residents of Tuxtepec, who depend for a living on the production of sugar cane, rubber and corn, as well as livestock, fishing and trade, know what it is to fight energy industry projects. In 2011 they managed to halt a private company’s construction of the small Cerro de Oro hydroelectric dam that would have generated 14.5 MW.

The formula: community organisation. “We’re organising again,” the local representative said. “What has happened in other states can be reproduced here.”

Papaloapan B forms part of the Veracruz Basin Integral Project, which would exploit the shale gas reserves in 51 municipalities in the state of Veracruz.

Pemex has already drilled a few wells on the outer edges of Tuxtepec. But there is no data available.

Farmers in Tamaulipas, meanwhile, “complain that their land fills up with water” after fracking operations, and that “the land isn’t producing like before,” said Roux, who added that exploration for shale gas is “a source of conflict…that generates violence.”

The expert and her team of researchers have extended their study to the northern states of Nuevo León and Coahuila, where 182 and 47 wells have been drilled, respectively.

Each well requires nine to 29 million litres of water. And fracking uses 750 different chemicals, a number of which are harmful to health and the environment, according to environmental and academic organisations in the United States.