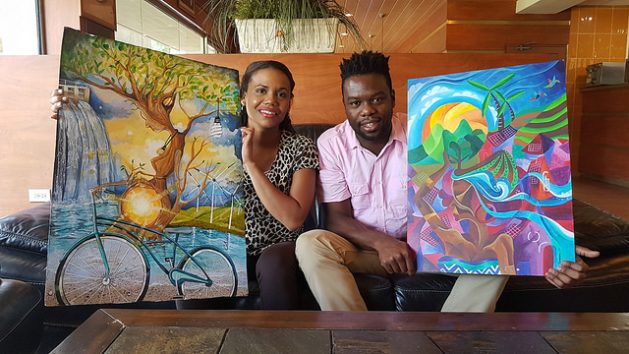 Second- and third-place winners, respectively, in the Caricom Energy Month Photography and Art competition, Candice Sobers and Seon Thompson, holding the works that won them the prizes. Credit: Jewel Fraser/IPS

PORT OF SPAIN, Trinidad, Aug 30 2017 (IPS) - Conversations about renewable and sustainable energy don’t typically include artistic ideas on the subject. However, the Caribbean Community (Caricom) has chosen to engage the region’s youth in the conversation by inviting them to create artistic works on sustainable energy for a regional competition.

Sobers said her focus in painting “Mother Energy” was to encourage “sustaining the environment with the right motive, with a motive of loving it, cherishing it and benefiting from it."

Some of those winners told IPS that the competition had indeed kindled their desire to be a part of the sustainable/renewable energy discussion now taking place in the region.

Candice Sobers, who won second place in the professional art category, describes entering art competitions “as a hobby” because “exposure in the arts is difficult to come by in Trinidad”. Nevertheless, the research she did for the competition has had an impact on how she uses energy. She now turns off any lights and appliances in her home that are not in use, and she has invested in energy-saving light bulbs.

Sobers’ entry to the Caricom Energy Month art and photography competition depicted a tree painted in the shape of woman who is seen pregnant with the sun. The mother tree’s mode of transportation is a bicycle and the environment she inhabits comprises various forms of renewable energy.

The painting, entitled “Mother Energy”, is rendered in acrylics, coloured pencil, and oil pastels. Sobers describes her work, in part, as follows: “The bicycle is a means of exercise without burning fossil fuels, encouraging the reduction of the carbon footprint. The energy saving bulb hangs on her neck as an accessory while she rides by the hydro-electric plant and wind mill landscape.”

Sobers said her focus in painting “Mother Energy” was to encourage “sustaining the environment with the right motive, with a motive of loving it, cherishing it and benefiting from it. If the motive is only for money mankind will find themselves abusing it in some form.” 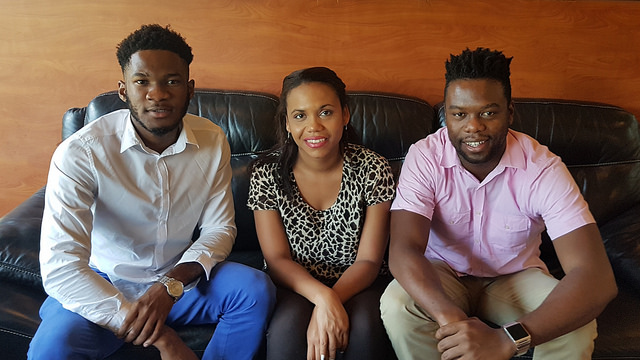 Third-placed winner in the professional art category, Seon Thompson, likewise chose to use a woman as part of his iconography. Like Sobers, Thompson holds a BA in Visual Arts from the University of the West Indies, St. Augustine. He told IPS, “I tried to give a double meaning to some of the elements.”

He explained that the hair of the woman, in a traditional corn row hairstyle, was also used to depict rows of plants while the palm trees seen in the landscape behind her also carried the implication of wind turbines. As one gazes at the painting, one’s eyes are led by the graceful lines of the woman’s arm and the undulating lines of cool blue and green depicting her hair to the warm, vividly coloured sun and mountains she carries in a basket on her head, with their obvious allusion to solar energy.

In explaining his work, Thompson said. “I really wanted to connect sustainable energy with the elements of the Caribbean we all could relate to—sun, foliage, fauna, people, houses and hills.” The houses in his painting are shown with solar panels on their roofs.

“In the Caribbean, we have two seasons, rainy and dry, so we really should be using solar energy, hydro energy, and so on….We are a prime example of nations that have all the elements aligned to practise sustaintable energy. We just need to invest in it more and see the value of utilising these mediums that exist and are readily available.”

Thompson said in creating his painting, “I really wanted to create an experience, not just have people say ‘that’s nice’. You must have an experience and really leave with something on your mind.”

He said he has started a project at the school where he teaches art to promote the idea of sustainability. The project encourages Form 5 students to find objects that are discarded and repurpose them in ways that are beneficial and profitable.

For 19-year-old Fidelis Iwueke, the first prize winner in the Caricom Energy Month video competition, his studies at A’Level in Environmental Science provided the foundation for his creation.

He provided IPS with a textbook definition of sustainability. “Sustainability is to ensure that the needs of today are provided for without compromising the future.”

Using public domain footage and videos that he gained permission to use, Iwueke was able to create his award-winning video. He began by creating an audio track of his voice discussing the topic of sustainable energy, to which he added music. He then overlaid this on the video he had obtained, following which he edited the video using the WeVideo app on his phone. The result was a seamless production that belies the fact that this was his first foray into video production.

The video then goes on to discuss why sustainable energy is important and the different forms that are available to Caribbean people and encourages their use, while holding viewers’ attention with arresting footage.

Reflecting on the competition theme, Iwueke said, “The sun is always there. We have nice oceans for tidal energy. We just need a basic attitude change; changes in our consumption patterns could go a long way.”

Despite learning environmental science at school, preparing for the competition was a learning experience for him. “I liked and followed the Caricom Energy page to keep in the know. I learned how far the Caribbean has come and how much more we need to do,” he said.

The competition thus provided an avenue for these young Caribbean artists to further their practice, while making them more invested in sustainable energy as a lifestyle. “Now that I am more aware of renewable energy, I will become more of an advocate in any way possible. And when the finances are there I will make better choices,” said Iwueke.