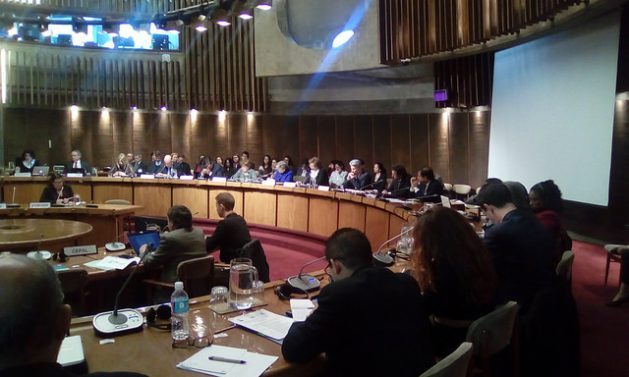 Representatives of governments, international organisations, civil society and academia from Latin America and the Caribbean debated what the future Global Compact on Safe, Regular and Orderly Migration should look like, on Aug. 30-31 at ECLAC headquarters in Santiago, Chile. Credit: Orlando Milesi/IPS

SANTIAGO, Sep 4 2017 (IPS) - Latin America and the Caribbean called for the free movement of persons to be included in the Global Compact on Migration, which will be negotiated within the United Nations in 2018, in the first meeting held by any of the world’s regions to decide on the position to be adopted on the future agreement.

Nearly a hundred experts on migration from the region took part in the meeting, held at Economic Commission for Latin America and the Caribbean (ECLAC) headquarters in Santiago on Aug. 30-31, which brought together representatives of governments, international bodies, civil society and academia.

Louise Arbour, U.N. Special Representative for International Migration, who is to draft the “zero draft” of the Compact before the end of the year, told IPS that “this is the first regional meeting and it gives us a great deal of information about what is happening today with people. It confirms many ideas, such as what is going on with irregular migration and people’s rights.”

Earlier, during the closure of the meeting, Arbour said that up to now “the movement of migrants, women and children has been poorly managed. They first talked about illegal immigrants, and pejoratively of economic immigrants.”

“Xenophobia is an expression of anger and lack of trust in governments,” she said.

“The goal is to facilitate regulated migration. It’s not on our agenda to stop the movement of people,” she said in reference to the Global Compact on Safe, Regular and Orderly Migration which is in moving forward within the U.N.

Arbour anticipated that the Draft will be “rooted in a development agenda” and will be aimed at “a people-centred, forward-looking pact that is realistically ambitious.”

For her part, ECLAC executive secretary Alicia Bárcena considered it imperative that “equality be at the core of the Compact, although perhaps we better first start with equity.”

“The DNA of the Compact is cooperation,” she said, adding that with this agreement “migration ceases to be about security and human rights, and becomes a development issue, in a strategic matter of global governance.”

For Bárcena, the six dialogues in different regions of the world that are to precede the proposal of a draft and the negotiations of the Compact in 2018 are “an unprecedented process and an opportunity which I do not know whether the international community is aware of.” 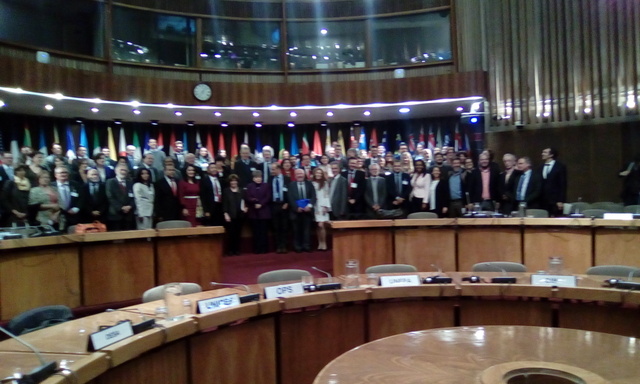 Family photo of the Latin American and Caribbean preparatory meeting for the negotiation of a Global Compact on Migration, where the debate included issues such as migrants’ human rights, social inclusion and the fight against all forms of discrimination such as racism, xenophobia and intolerance. Credit: Courtesy of Orlando Milesi

Juan José Gómez, Mexican ambassador to the U.N. and co-facilitator of the intergovernmental consultations and negotiations for the Compact, said “it is nearly a miracle” to debate the subject of migration at a global level because “for decades the doors of the U.N. had been closed to this problem.”

To negotiate after debating first “has saved us from negotiating on the basis of preconceptions, prejudices and misinformation. The initial stage of regional debates will allow us to take an x-ray of migration to replace the rhetoric and prejudices with evidence, data and reality,” he said.

Gómez said the document “should be realistic and acceptable for all member states, in order for it to be respected.”

For her part, Laura Thompson, deputy director general of the International Organisation for Migration (IOM), said that the Compact will reflect “common principles and understandings” and called for “a capacity to manage migration” to prevail, entailing in the first place “protection of the human rights of all migrants.”

Diego Beltrand, IOM regional director for South America, told IPS that the regional meeting meant “progress and achievements, because in a comprehensive debate not only challenges and problems have been identified, but also proposals and concrete experiences that will be tremendously useful for the final discussion of the Compact.”

Esther Cuesta, an Ecuadorian member of parliament in representation of the migrants of her country, who herself was a migrant for 19 years, told IPS that in the region “it is imperative to eradicate poverty because we cannot prevent abuses, exploitation, human trafficking or migrant smuggling if we do not create peaceful societies with increased well-being so that people don’t have to move and flee from their places of origin in extremely precarious conditions and become victims of totally inhumane exploitation.”

“In the highly capitalist nation-state system that we live in, free circulation of capital has been developed,” she said.

“Capital flows to fiscal paradises – evasion that has impoverished many states in our region. But while there is free movement of capital, the movement of people has been restricted, even though there is no capital without human beings, and capital makes no sense without human life,” she complained.

Valter Bittencourt, head of the Network of Migrant Workers of the Trade Union Confederation of the Americas (TUCA), with 60 million members from some 60 central unions, told IPS that “the Compact should consider free movement of people, of workers, the right to migrate, to stay or return home in dignity.”

“Immigrants, regularised or not, should have the same rights as all citizens,” emphasised the Brazilian trade union leader.

In his opinion, “irregular migration aggravates the vulnerability of workers to exploitation by unscrupulous hands that benefit from this situation.”

“The deficient conditions for development and lack of job opportunities in the countries of origin are the trigger for this kind of immigration, of which some sectors of receiving countries take advantage to get higher profits,” he reflected.

“Those affected are the most vulnerable poor sectors, forced immigrants who have no other possibility than to leave their country unprotected, willing to do any work to survive. They have been denied their right to not migrate,” said Bittencourt.

For Salvador Berumen, deputy director general of migratory policy in Mexico’s Interior Ministry, “what is most important is to achieve a minimal consensus among countries, especially with a new narrative more in favour of human rights.”

“For the past five years, Mexico has had about 12 million migrants in the United States. Continually about 200,000 are deported or return, equivalent to the number that migrate each year,” he told IPS.

“Mexico deported 147,370 irregular migrants in 2016. And of these, 97 per cent were Central American. This country’s governance of migration is more focused on arresting and deporting than on ensuring migrants’ human rights,” he told IPS.

“If we want to put the issue of migrant’s human rights at the forefront, what we have to do is to get away from the border security approach,” added Quiroz.

The Amnesty representative called for “limiting detentions of migrants. Is should only be an exceptional practice, not a routine one.”

In the seven dialogue roundtables of the regional meeting other vulnerabilities and rights of migrants were discussed, such as the high cost of sending remittances, access to regularisation, conditions faced by women and by children who travel without guardians, and the violence in arrests and deportations.