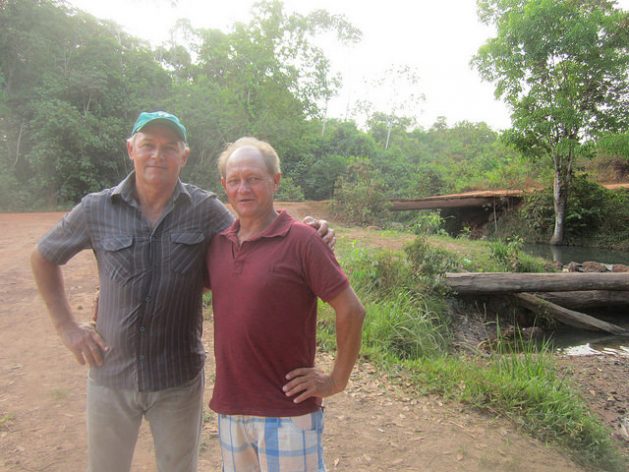 Brothers Daniel (left) and Armando Schlindewein stand in front of the small bridge over the Matrinxã river which will be submerged by the filling of the Sinop hydropower dam reservoir in western Brazil. Since the house they share is on the other side of the river, they will have to move, and their farms, which are connected by the bridge, will be separated. Credit: Mario Osava/IPS

SINOP, Brazil, Oct 9 2017 (IPS) - “After being displaced for the third time,” Daniel Schlindewein became an activist struggling for the rights of people affected by dams in Brazil, and is so combative that the legal authorities banned him from going near the installations of the Sinop hydroelectric dam, which is in the final stages of construction.

He was a teenager in 1974 when the Iguaçu National Park was expanded in the southwest of the country, leading to the expulsion of his family and other local farmers. Seven years later, his family was once again evicted, due to the construction of the Binational Itaipu dam, shared with Paraguay, which flooded 1,350 sq km of land.

That was during Brazil’s 1964-1985 military dictatorship, when fighting for people’s rights could lead to prison and torture.

Today there are laws, recognition of rights and mechanisms to defend people which make conflicts more visible, such as the one triggered by the construction of four dams on the Teles Pires river in the western state of Mato Grosso, where Schlindewein now lives, 1,500 km north of where he was born.

The announcement, last decade, of the plans for the new dams “prompted previously fragmented social movements to organise in their resistance” in Mato Grosso, Maria Luiz Troian, an instructor at the Sinop state vocational-technical school, told IPS.

In 2010 the Teles Pires Forum was born, an umbrella group of trade unions, non-governmental organisations, religious groups, associations of indigenous people and fisherpersons, university professors and groups like the Movement of those Affected by Dams (MAB) and the Landless Movement (MST).

It is a “pluralistic forum without hierarchies,” for the defence of rights that are threatened or violated by hydropower dams, said Troian, one of the group’s most active participants.

Farmers whose land will be flooded by the construction of dams “are forced to accept unfair compensation, because the alternative is legal action, which takes a long time and has an uncertain outcome,” she said. 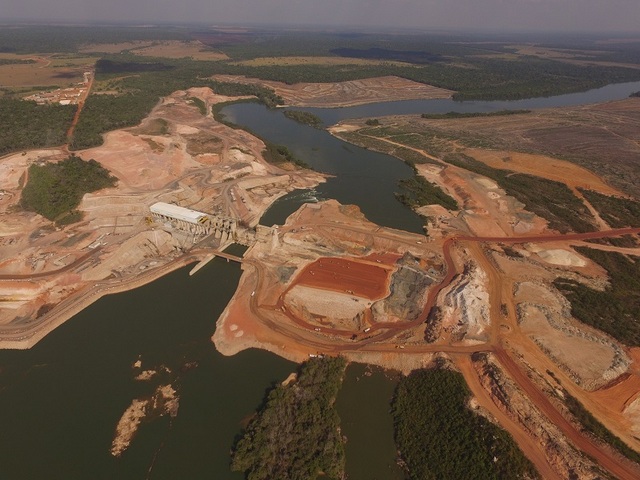 Aerial view of the hydropower dam being built by the Sinop Energy Company on the Teles Pires river which is changing the lives of the people in a large part of the western Brazilian state of Mato Grosso – both family farmers and monoculture producers of soy. Credit: Courtesy of CES

“In practice it is expropriation; they pay us four times less than the local market price,” complained Schlindewein, 56, one of the first people who settled in the village of Gleba Mercedes, in 1997, five years after emigrating from the southern state of Paraná, drawn by the prospect of cheap land in Mato Grosso.

“Many gave up because it rained too much and it took four hours to get to the city of Sinop, just 100 km away, in ‘girico’ (the name given to improvised motorised carts brought by peasant farmers from Paraná),” he said. Electric power did not arrive in the area until 10 years later.

Despite the difficulties, years later Schlindewein brought his divorced brother Armando, one year younger, who purchased land next to his, separated by the Matrinxã river that runs into the Teles Pires river.

The two brothers share a tractor and other machinery, and live together in the elder brother’s house, less than 100 metres from the small river.

But the dam will put an end to their brotherly cooperation, because the water will rise up to eight metres deep in that area, submerging the small wooden bridge that connects their farms and forcing them to move the house to higher ground.

The solution demanded by the Schlindewein brothers is to build up the riverbanks and make a longer, higher bridge. This modification depends on the Sinop Energy Company (CES), which owns the dam, and is important for local residents, because otherwise the distance to the city would be increased by 20 km since they would have to skirt around the flooded Matrinxã river. 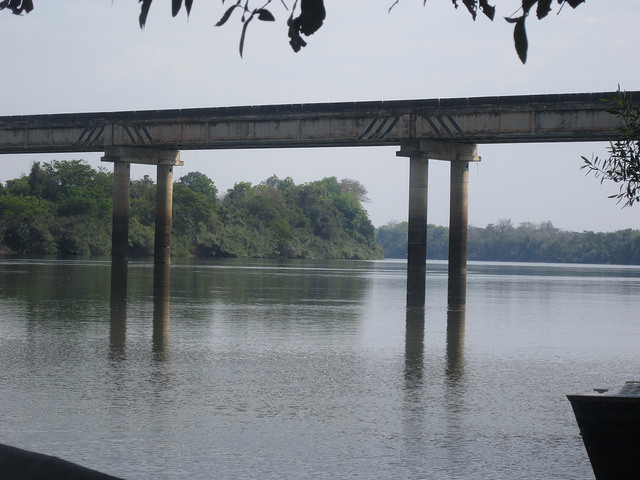 The Teles Pires river, where it winds its way past the future Sinop and Colider hydropower plants, under a bridge on BR-163, the road used to transport most of the soy produced in the state of Mato Grosso northwards to Miritituba, the start of the Tapajós river waterway, which continues along the Amazon river until running into the Atlantic ocean, in Northeast Brazil. Credit: Mario Osava/IPS

Of the 560 families in the village – also known as the Wesley Manoel dos Santos settlement – 214 will see their land totally or partially flooded by the dam when the reservoir is filled in 2018.

Besides the low level of compensation, some complain that improvements made to their land and assets that they will lose have not been taken into account.

In the case of José da Silva Teodoro, his wife Jacinta de Souza and their four children, 79 of their 81 hectares of land will be flooded. With the indemnification, they were able to buy 70 hectares of land nearby, but “without the three sources of water” they have on their farm now – the Teles Pires river along the back and a stream running on either side.

“It wasn’t enough money for us to buy land within the settlement; we were expelled and we will lose our fruit trees, for which they hardly gave us a thing,” Teodoro told IPS. “We’ll plant new ones, but they won’t produce fruit for four or five years.”

Their neighbour Ely Tarabossi, his wife and two children already had to give up half of their 100 cows, because the heavy traffic of trucks, tractors and buses caused by the construction of the dam cut off their access to water from the river. But Tarabossi plans to stay, even though the reservoir will flood 30 of his 76 hectares.

“I don’t have any other option,” he said. Although he was reluctant to do so, he plans to dedicate himself to monoculture production of soy, of which Mato Grosso is Brazil’s largest producer. “We tried everything here, from cassava to cucumbers…logistics is the hurdle. I’m 83 km from Sinop, and growing fresh produce is not feasible – everything perishes on the long journey there,” he said. 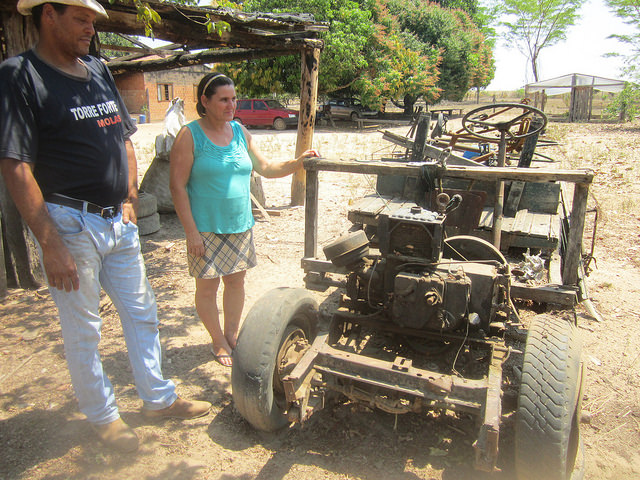 José da Silva Teodoro and his wife Jacinta de Souza stand next to their “girico” – the small, improvised vehicle that they use to transport people and products in the northern part of the western Brazilian state of Mato Grosso, which they brought with them when they moved here from the southern state of Paraná. Credit: Mario Osava/IPS

The logging industry was the first economic driver in the area, and helped clear the land for agriculture, according to the local residents.

Then came cattle-raising, which led to the deforestation of vast expanses of land, followed by soy, which rotates with corn or cotton every year. Livestock and then soy dominated the middle and northern part of the state of Mato Grosso and spread northwards, into the Amazon rainforest.

Then came the construction of hydropower dams.

With regard to compensation, CES stated that its calculations are based on the rules of the Brazilian Association for Technical Standards, subject to approval by the concerned parties. The negotiations, which have almost been completed, are carried out individually with each property owner, the company’s communication department told IPS.

“Everyone who is affected has constant meetings with our teams, who are always available for whatever is needed,” the statement said. Bridges and access roads will be built with the approval and “active participation” of the concerned parties, with the aim of minimising the impacts of the dam, it added.

To boost local development, CES has been implementing a Fruit and Vegetable Production Project over the last year in the settlements of Mercedes and 12 de Outubro, with the participation of 88 families.

Large agricultural producers in the area complain that the project ruled out sluices in the hydropower plants, and as a result, discarded the idea of a Teles Pires-Tapajós waterway for exporting soy produced in Mato Grosso, which currently depends on road transport.

“The hydroelectric dams respond to a national need; unfortunately their construction was agreed before the adoption of the new law that requires the creation of canals for future sluices,” Antonio Galvan, the president of the Sinop rural producers association, told IPS.

His hope now is that the waterway will be created on another nearby river, the Juruena, which along with the Teles Pires runs into the Tapajós river, and connect with the 1,142-km Ferrogrão railway running between Sinop and Miritituba, the export port on the Tapajós river in the northern Amazon state of Pará.