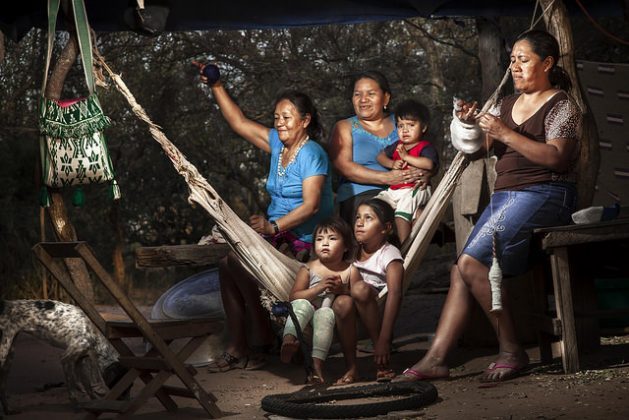 According to FAO studies, empowering rural women and investing in activities that significantly increase their productivity could lead to a significant reduction in hunger and malnutrition. Credit: Max Toranzos / FAO

SANTIAGO, Oct 16 2017 (IPS) - On September 15, we announced the “State of Food Security and Nutrition in the World” report, published in collaboration with five United Nations organisations, including FAO. The 144-page study shows numerous results and analyses of various dimensions and indicators, but the message is the same: after a long downward trend in the world’s hunger levels, we are now taking a step backwards.

It is estimated that today, 815 million people suffer from hunger, which corresponds to an increase of 38 million people compared to last year. This is an unacceptable backward step, especially if we recall that only two years ago, countries of the world committed to the Sustainable Development Goal: to eliminate hunger on the planet by 2030.

To supplement the previous report, FAO and the Pan American Health Organisation, have recently published the “Panorama of Food and Nutritional Security in Latin America and the Caribbean 2017”. The main message is the same: we are also losing ground in the fight against hunger.

Compared to the last measurement, 2.4 million persons have become undernourished. In total, 43 million people in Latin America and the Caribbean suffer from the scourge of hunger. In seven countries, more than 15% of the population is in this state: Antigua and Barbuda, the Plurinational State of Bolivia, Grenada, Guatemala, Haiti, Nicaragua, and Saint Lucia.

If the most recently projected hunger rates do no change, only eight countries will reach the Zero Hunger goal by 2030: Brazil, Chile, Colombia, Cuba, Jamaica, Mexico, Trinidad and Tobago, and Uruguay. Therefore, we must make a stronger and better effort in reaching the committed goal. Brazil, Cuba and Uruguay are leading the progress made in the fight against undernourishment and Chile, Argentina and Mexico are a part of the most advanced group of countries.

Less than 4.2% of their populations suffer from undernourishment. However, many of them have entered a stage where their progress has slowed down, just when the goal is within reach. Since 1990, Mexico has reduced incidences of hunger by 2.5% and Argentina by approximately 1.7%.

Countries like Nicaragua and Bolivia have another reality. The level of hunger in these nations are high, above 17%, but what is important is that they are improving and moving quickly in the right direction.

We highlight the case of Nicaragua, with an impressive reduction of 35% since 1990. Bolivia is also moving at a good speed with hunger decreasing by almost 16% since 1990.

We can identify a third group of countries where the problem has worsened over the last year. In Costa Rica, 5.6% of the population is suffering from undernourishment. It is one of the countries with the highest numbers, and the problem has recently increased.

Antigua and Barbuda, Grenada, Peru, Saint Lucia and Venezuela have also regressed compared to the year 2016, and in the latter case, even more significantly. Peru’s recent regression must be considered in light of the fact that this country has a successful long-term trajectory, since it has reduced hunger by 22% since 1990, leaving the country with only an 8% incidence of undernourishment.

Considering the previously summarised trends, what strategies do we need so that in the year 2030 we can say that Latin America and the Caribbean is a region free from hunger, as promised by our political leaders?

In countries like Guatemala or Haiti that still have a high percentage of the population suffering from hunger, we must establish a broad and transverse strategy, in other words, one that covers every corner of their societies. CELAC’s Food Security and Nutrition Plan or the Mesoamerican No Hunger Initiative have proposals based on the best and most successful regional experiences.

These countries, Haiti in particular, require international cooperation, but to be successful this must be supported by strong and long-term national political will, surpassing humanitarian logic and linking the reduction of hunger to the promotion of sustainable development. Pablo Aguirre, technical advisor of the FAO Regional Office for Latin America and the Caribbean

In countries that already have this goal in sight but are still not victorious, the strategy that has worked in previous decades, must be changed.

These counties are entering a harder stage in the fight against hunger, which persists in social and territorial pockets of deep poverty, where factors such as institutional weaknesses, ethnic and gender inequalities, social exclusion, or geographic isolation, make the usual policies less effective.

It is like the climber who tries to reach to the peak of Mount Everest: the effort in the last 500 meters is a lot more that what was required at the beginning, and in order to reach the goal he must resort to special strategies.

At FAO, it is proposed that we accurately identify the social and territorial pockets of hunger, country by country, and for each one, we tailor-make a programme.

However, there is one very important factor in every country. Latin America and the Caribbean can only announce that our region is free from hunger in 2030 if our social and political leaders, businesses, each and every one of us, become convinced that populations suffering from hunger is an insult to our own dignity and an embarrassing trademark that we can no longer tolerate.