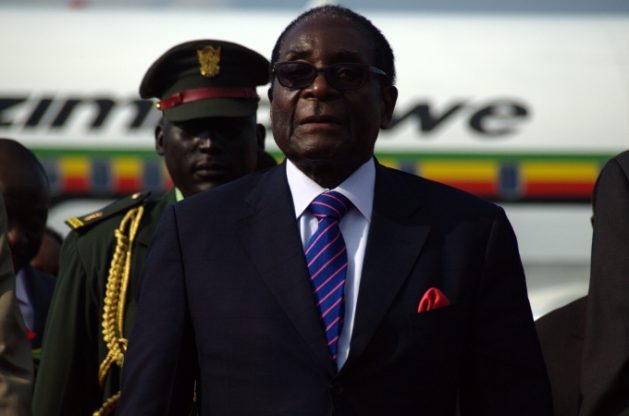 After 37 years in power, Mugabe, 93, had become almost synonymous with the country he led. Nothing was said about Zimbabwe without a mention of Mugabe: his rule, his candor and his unforgettable one-liners.

Events of the last fortnight culminated in the removal of one of Africa’s political godfathers and a grandmaster of guile.

It was his wit combined with his political astuteness that made Mugabe more feared than he was adored. Mugabe has missed an opportunity to die in office, a wish he personified by holding on to power for so long.

Mugabe, the only leader Zimbabwe has known since independence from the British in 1980, resigned today after facing impeachment by his own party – which a few months back had endorsed him as their sole presidential candidate for the national elections due in 2018. If he had won, Mugabe would have been in office until the age of 98 – another world record.

The ruling Zanu PF party made a record of its own. It dramatically fired Mugabe as its leader and endorsed a decision to impeach him after Mugabe ignored a Nov. 20 deadline to voluntarily step down.

A diehard dictator forced out

But events of the last fortnight culminated in the removal of one of Africa’s political godfathers and a grandmaster of guile. The sacking of Emmerson Mnangagwa as the country’s Vice-President from the government and ruling party Zanu PF because he was disloyal and accused of plotting to dethrone Mugabe set in motion events that saw Mugabe fighting for his political life.

Mugabe appears to have given in to his wife Grace’s penchant for power. He purged the party’s senior leadership, seen as an obstacle to Grace’s goal of a Mugabe dynasty. It was too much to take for the army, Zanu PF and the people. Enough was enough and Mugabe had to go. Grace – 41 years Mugabe’s junior – had to be stopped.

Now Mugabe himself has been forced to say goodbye.

“I have resigned to allow smooth transfer of power,” he wrote in his resignation letter, which was read aloud to applause at a joint session of the Zimbabwean Parliament. “Kindly give public notice of my decision as soon as possible.”

Mugabe ‘s avowed principle that ‘politics shall always lead the gun and not the gun politics’ was reversed when army tanks rolled into the streets of the capital Harare last week, held Mugabe and his family under house arrest and took over the state broadcaster. Their action, justified as a means to rid the country of criminals who had misled the President, was never referred to as a coup. The gun took over the politics, putting Zimbabwe on a new unknown path to change. Yet Mugabe initially brazenly brushed off the events of the past week as no threat to his leadership.

After the last week’s massive public clamour for Mugabe to step down, a frail and feeble Mugabe appeared to give the Zimbabwean populace a middle figure in a rambling speech last Sunday that he would preside over the forthcoming congress of the Zanu PF which has fired him as its leader and head of State.

A former teacher turned revolutionary leader, Mugabe espoused the reverent statesman, reconciler and nation builder. His pro-development policies are credited with creating educated, savvy citizens, many of whom have made a mark on the global stage. But an educated people quickly understood the suppression of their rights as Mugabe consolidated power. He changed the law to become executive President in 1987, the same year he forged a Unity Agreement between Zanu PF and rival political party, PF Zapu led by his erstwhile opponent, Joshua Nkomo.

“Mugabe is history already. Unfortunately, he has destroyed whatever legacy he had 20 years ago,” says economist and parliamentarian, Eddie Cross. “He will now be remembered as the man who destroyed our agricultural industry, brought hunger to the majority of people’s homes and allowed Africa’s most diversified economy to collapse.”

Cross says under Mugabe’s watch, incomes have declined by two-thirds, agricultural production by two-thirds or more, industry by over 80 per cent and employment is down to less than 10 per cent of the adult population. Mugabe, Cross believes, has driven over 5 million Zimbabweans into the Diaspora, the majority skilled, well-educated people with capacity.

“We are immediately faced with a cash crisis, a fiscal crisis and a complete lack of confidence in the State, the Banking sector and in government policy,” Cross told IPS. “All these issues have to be dealt with simultaneously. The economic wish list is a mile long – very difficult to prioritize but clearly we have to curb recurrent expenditure by the State, we have to increase revenue, we have to balance our budget and we have to restore confidence in our monetary policies and banking industry.”

The new government – when it is in place – will need to form a national government which has both popular support and international credibility if it can address the many problems facing Zimbabwe, economic recovery being one.

Cross is convinced the international community will demand a return to democracy as soon as possible and the full implementation of the Constitution as well as the restoration of the rule of law and adherence to human rights.

“They are going to demand respect for property rights and for strict compliance with an IMF programme,” says Cross, a founding member of the MDC and currently its Policy Coordinator General. “This tough wish list needs a strong government, it needs time and it needs credible and competent and incorruptible leadership.”

Mnangagwa, 75 – an ally and comrade in arms of Mugabe – has been mentioned as the new leader for Zanu PF, with his expulsion reversed this week. Described as a subdued contriver, Mnangagwa served in various portfolios of security, intelligence and justice. He has been seen as Mugabe’s go-to man with an uncanny ruthlessness in dealing with opponents.

In a widely circulated statement attributed to Mnangagwa, the former vice president who fled the country after being fired had urged Mugabe to step down and take heed of public calls.

“Mugabe can be tried domestically, but not by the ICC [International Criminal Court],” says Dave Coltart, a human rights lawyer and former cabinet minister. “Impeachment would be a legal way of terminating his presidency. Mnangagwa needs to comply with the Constitution.”

Touted as heroes, Zimbabwe’s army has pulled off epic public relations campaign to restore the country’s political and economic fortunes through a new government. But will there be a new order in Zimbabwe? As Zimbabwe remains on edge about what is to come, Coltart warns against celebrating the unclear promises of the military men.

“In all of our euphoria we must never become so intoxicated as to forget that it was the same generals who allowed Mugabe to come to power in 2008 and 2013,” said an opinion piece this week, urging that Zimbabweans should not forget how the military and war veterans spearheaded the violence which followed the March 2008 elections to ensure that Mugabe got back into power.

“So our message to the military must now be ‘thank you for cleaning up the mess you created but you must now return to your barracks as soon as possible and never again get involved in the electoral process,” Coltart said. “The real danger of the current situation is that having got their new preferred candidate into State House, the military will want to keep him or her there, no matter what the electorate wills….We, and the international community, must make it loud and clear to the military that they have no role to play in that election, other than assisting the police to keep the peace.”

For many decades fear has been a powerful instrument in the hands of Mugabe and his supporters. Fear was used to cajole, silence and eliminate dissent. It worked to keep Mugabe in power, kept his supporters in line and opponents in check.

Jennie Williams, a human rights activist and founder of the movement, Women of Zimbabwe Arise (WOZA), bears emotional and physical scars of crossing swords with the Mugabe régime in calling for change.

“I will be vindicated to hear Mugabe himself saying I resign,” says Williams, who was arrested more than 65 times for criticizing the Mugabe regime. “I am saddened that today the Zanu PF members have realized what we have been saying and calling for all this time but they did not have the courage to tell Mugabe to go.”

Williams, 55, is conflicted on what should be delivered in the post-Mugabe era.

“I am desperate for justice,” she told IPS by telephone. “I wanted justice for this country, for the people, for my family. Many people suffered under Mugabe’s rule and today have no jobs, cannot pay their bills, families have been torn apart but I am happy people have shaken away fear.”

The wish list is long. Zimbabweans seeks a restoration of economic stability, a return to the international fold, the revival of industry and the promise of jobs, peace and security to get on with their lives. Maybe Mugabe had an easy solution:

“We must learn to forgive and resolve contradictions real or perceived in a comradely Zimbabwean spirit,” Mugabe earlier told a stunned nation that was eagerly waiting for his resignation.

It finally came today as his own party introduced a motion to impeach him. According to news reports, after the letter was read by Speaker Jacob Mudenda, once-bitter rivals from ZANU-PF and the opposition Movement for Democratic Change shook hands and hugged.