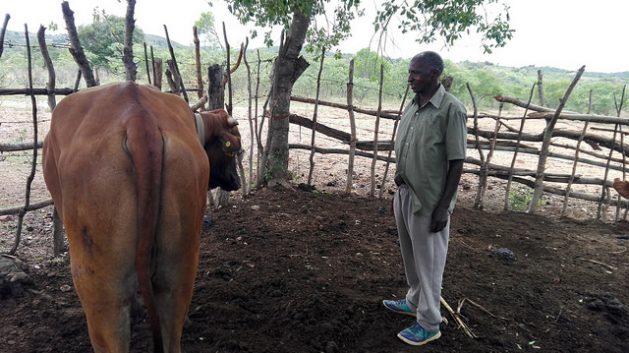 LUSAKA, Zambia, Feb 14 2018 (IPS) - In the past, Lameck Sibukale only knew savings in the form of rearing chickens, goats and more importantly, cattle—a long cherished cultural heritage of the Tonga-speaking people of southern Zambia.

But thanks to a village savings scheme, the 78-year-old from Nachibanga village in Pemba district is now part of this growing financial inclusion crusade, bringing some fresh air to the functionality of the village economy.

“How I wish I was introduced to this concept earlier,” Sibukale told IPS. “This is a fantastic idea for us villagers who are far from formal banks, especially at a time like now when we need to save in case of crop failure, which has become common as a result of poor rainfall.”

Saving just over 200 dollars, Sibukale earned over 500 dollars from a portfolio of 2,100 dollars, which the 25-member group saved in eight months.

Using the farmers’ club concept, up to 25 members come together and form a solidarity group. The group meets on either a weekly, bi-weekly or monthly basis to save (buying shares at a stipulated price) based on their financial capabilities. The money is banked in a box whose keys are kept by two or three people for purposes of transparency. For financial sustainability, members are encouraged to borrow and pay back at an agreed minimal interest rate.

While there are several organisations championing savings for the majority unbanked rural population, Sibukale and his group are part of the World Food Programme (WFP)’s R4 rural resilience initiative.

One African proverb states: “If the rhythm is changing, so must the dance steps,” implying the need to develop new strategies to deal with emerging complex challenges such as climate change, which is compromising food, nutrition and income security—three key elements at the core of Sustainable Development Goals (SDGs) 1 and 2, aimed at ending poverty and hunger.

Therefore, as climate change is already complicating global food systems, development actors are also looking to integrated approaches to sustain productivity and production especially for the over 500 million smallholder farmers who produce much of the world’s food.

For WFP, ending hunger will not be possible without increasing smallholder farmers’ productivity. Thus, according to Jennifer Bitonde, WFP Zambia Director, “R4 is one of the pro-smallholder farmer approaches adopted where food assistance is defined not as old-style food aid handouts, but rather as a comprehensive range of instruments, activities, and platforms that together empower vulnerable and food insecure people and communities to access nutritious food.”

According to Allan Mulando, head of Disaster Risk Management and Vulnerability Assessment at WFP Zambia, the idea is to support farmers with several layers of protection across the value chain starting from production up to market access.

“In addition to conservation agriculture, insurance and microcredit, savings groups are specifically put in place to pool together financial resources which act as a buffer against short term needs, especially in times of shocks such as droughts and floods which usually lead to crop failure, ultimately affecting the normal livelihood pattern of the people,” explains Mulando.

And this is exactly what happened to farmer Sibukale. Last season, he lost one of his oxen, which negatively affected his tillage activities through reduced animal draft power. “I am happy that I joined this group where I’ve earned enough to replace it,” he said, proudly pointing at his newly acquired ox.

Whereas conservation agriculture and weather insurance are two layers of protection to support improved productivity, Sibukale believes savings are an added incentive.

He told IPS how he managed to pay for his children’s school fees, bought farming implements and inputs (fertilizer, seed and a ripper), helping him to increase the area under conservation agriculture, an exercise he says “would not have been possible without the money I earned from the savings group.”

And Milimo Haluma, a member of Silekwa savings group of Sikwale village, testifies to improved productivity. Haluma says before now, he found it difficult to buy inputs for himself.

“But now, with savings, I am able to purchase inputs on time,” Haluma said. “Due to timely input purchase, my productivity has improved. Last season, I was able to produce 3.75 tons of maize on the same size of land where I’ve been producing an average of 1.5 tons in the past seasons.”

Haluma, whose savings group is looking for external financial support to grow their portfolio, adds that with the incentive of weather insurance, farmers are finding it easy to save the little they earn. “Insurance is providing us a peace of mind to buy shares in our savings groups for we know that we are covered in case of crop failure resulting from poor rainfall,” he says.

Based on such positive strides, weather insurance and other related financial services for farmers’ adaptation to climate change have become topical issues at the highest global decision making levels. For instance, at COP 23, a global partnership to provide more financial protection against climate risks—‘InsuResilience’ moved into higher ambition phase.

The Initiative, which was launched in 2015 by the G7 group of nations under the German Presidency, aims at providing insurance to 400 more million poor and vulnerable people by 2020, and increase the resilience of developing countries against the impacts of climate change and natural disasters. It brings together G20 and V20 nations—the most vulnerable nations including Island states.

“The Global Partnership is a practical response to the needs of those who suffer loss because of climate change,” said the COP23 President and Fijian Prime Minister Frank Bainimarama.

Meanwhile, Thomas Silberhorn, German’s Parliamentary State Secretary to the Federal Minister for Economic Cooperation and Development, announced support for the new global partnership of 125 million dollars as part of the launch.

This follows the £30 million commitment made by the UK Government in July 2017, via its Centre for Global Disaster Protection. The initiative supports data and risk analysis, technical assistance and capacity building according to countries’ needs and priorities in terms of concrete risk finance and insurance solutions.

Commenting on the initiative, Patricia Espinosa, Executive Secretary of the UN Climate Change, said: “This new and higher ambition initiative represents one, shinning, example of what can be delivered when progressive governments, civil society and the private sector join hands with creativity and determination to provide solutions.”

The most recent example of support was in September 2017, when more than 55 million dollars was paid out to ten Caribbean countries within just 14 days after hurricanes Irma and Maria had wreaked disaster on the islands.

And based on lessons from the R4 model which WFP has been piloting in Zambia since 2014, the Zambian government has this farming season incorporated weather insurance in its Farmer Input Support Programme (FISP) E-voucher programme, which has also allocated 20 percent for legume inputs aimed at encouraging crop diversification, an inbuilt resilience measure promoting improved soil fertility and income for farmers.

“We are also saying let us support the farmers on the e-voucher to grow more than maize,” said Dora Siliya, Minister of Agriculture. “So we as government give 170 dollars, while the farmer makes a contribution of 40 dollars. And for the first time this year, from this money, 10 dollars is going to be Weather Index Insurance.”