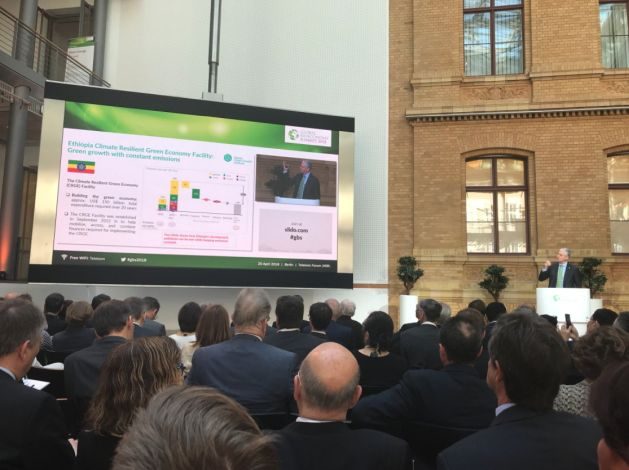 Apr 24 2018 (IPS) - On April 19-20, I attended the second Global Bioeconomy Summit in Berlin. Bioeconomy is currently a hot topic for scientists and policymakers. Rapid advances in molecular biology combined with big data and artificial intelligence have resulted in big jumps in our understanding of living organisms as well as organic matter, the biomass produced by plants and animals, at the level of their DNA. That has gone hand in hand with technologies that allow scientists and industry to manipulate, easily, everything from enzymes to bacteria to plants and animals.

Industry can also reproduce complex compounds found in nature, such as artemisinin, used to treat malaria. Or developed advanced biofuels that use grasses or algae for biofuels rather than sugarcane or corn. Or use bio-based sources for 3-D printing. So rapid are the changes in science and manufacturing, and so profound are its implications, that some refer to the new bio-economy, that uses bio-based sources for pretty much anything in our economy, as the 4th industrial revolution.

The 800 people in the Berlin Summit appeared to me to be roughly equally split between: (1) those wondering whether this bioeconomy disruption will be environmentally sustainable and socially inclusive – as we at GGGI define green growth; and (2) developers of these new technologies that have the power, as they believe, to change the world as we know it – much as the earlier industrial revolutions we experienced.

The traditional bioeconomy is not new – it is agriculture and forestry, or the agro-food system. Clearly, the current agro-food system is not sustainable. It produces roughly a quarter of greenhouse gas emissions causing climate change, has led to degraded soils in a very large share of cultivated land, is responsible for some 70% of all water used by man and thus a key factor in water scarcity, overuses chemical fertilizers that causes massive pollution in rivers, lakes and coastal zones, and is responsible for the lion’s share of deforestation, loss of wetlands and biodiversity. In short, our current agro-food system is the primary driver of our planet’s ill health – and it produces unhealthy food that has produced 2 billion overweight and obese people causing massive health problems.

Can the new bioeconomy be sustainable?

The most important natural climate change solution is to prevent deforestation, reforest, and restore peatlands. A good example is Colombia. Forty percent of the country is part of the Amazon, some 46 million hectares (the size of Germany), of which 39 million is still forest.
Can the new bioeconomy help make the old bioeconomy sustainable? That is a big question without an obvious answer. At the summit there were certainly enough examples of eco-friendly products. Clothes made from bamboo or coffee grounds. Furniture from recycled anything. A fridge sized gadget to grow your own salads and herbs in your kitchen, fully automated. Bicycles made from bamboo.

There was also ample discussion on the downsides of the high-tech bioeconomy. Will the public accept and trust the bioeconomy – given the distrust of biotechnology, let alone GMOs? Will the benefits of the new innovations be fairly shared with the countries and people of origin of the biodiversity? Are the new bioeconomy products truly sustainable? Do we know enough about health impacts?

My own contribution to the Summit assessed whether the new bioeconomy has the potential to strengthen the Paris Climate Agreement and Energy Security. My conclusion is that the answer to this question is also far from obvious. To begin with, our current bioeconomy, as indicated above, is more part of the problem than the solution. But can this change? Are there bio-based, or natural, solutions to deal with climate change and can increase energy security?

The most important natural climate change solution is to prevent deforestation, reforest, and restore peatlands. A good example is Colombia. Forty percent of the country is part of the Amazon, some 46 million hectares (the size of Germany), of which 39 million is still forest.

This forest was in part conserved as a result of the 53-year existence of the Revolutionary Armed Forces of Colombia (FARC), who enforced limits on logging by civilians – in part to protect their cover from air raids by the government army. After the 2016 peace agreement the forest now is opened up – will it be deforested, or can there be new bio-businesses created that generate forest and agricultural products and sustainable livelihoods while conserving the ecosystem?

That is the subject of a major collaboration between the governments of Colombia and Norway, under the partnership called the Joint Declaration of Intent on cooperation on REDD+ and promoting sustainable development, supported by GGGI.

Earlier in April the Colombian and Norwegian governments agreed to extend the current program from 2020 to 2025, with an additional US$250 million contribution from Norway. A key component in the Colombian national green growth policy that GGGI is helping to develop, is a modern, sustainable bioeconomy with focus on activities ranging from biofuels with palm species to pharmacological compounds.

One exciting presentation in Berlin from Mauricio Lopes, the president of EMBRAPA in Brazil, promised carbon-neutral beef. Carbon neutral beef could be produced, in the Brazilian Amazon, through integrated systems that combine trees, brachiaria fodder grasses with a bio-stimulant, and cows.

Such integrated systems may also have a high potential for the Colombian Amazon, much in line with an innovative financial instrument being structured by GGGI, FINAGRO, and the Amazon Vision Program, dedicated to providing low-interest credit loans and additional incentives to local producers who are committed to sustainable cattle ranching practice.

In Indonesia, GGGI supports the government to develop sustainable business models to restore the peatlands, also with Norwegian funding. The goal is to prevent peatland burning which causes air pollution all over SE Asia, as well as major GHG emissions.

Our analyses show that, for example, restoration of the 40 thousand ha Utar-Serapat peatland dome in Central Kalimantan would generate 600 thousand tons of carbon credits. Even at a low $5/ton carbon, that could finance the peatland restoration in ten years.

Can bioenergy strengthen the world’s energy security? No, that is unlikely. There just isn’t enough biomass available to do so sustainably, without competing with other uses, from food (for sugarcane or corn) to maintaining a healthy soil (for agri-waste).

At smaller scales, locally, using biomass waste for energy makes a lot of sense and is already commercially attractive. Paper mills, for example, used to leave a large share of the wood pulp as waste, and use fossil fuel to power their machines.

In Vietnam, for example, 8 of the 41 sugar mills already have grid connected waste to energy plants. I visited one, in Soc Trang province, which was expanded from 6 to 12 MW in 2014. GGGI hosted a workshop to assess the total biomass waste to energy potential in Soc Trang province, which may be as much as 50MW under one optimistic scenario. The province already has one coal fired power plant, with a 1200MW capacity.

All the biomass of the province is not going to prevent the planned second coal fired power plant, of equal capacity, from being built. For Vietnam as a whole, the total potential of biomass energy, if all obstacles could be overcome, may be as high as 6000MW, or 5 coal-fired powerplants. Vietnam is planning to build another 24 coal fired power plants, however, and clearly biomass energy is not going to be an alternative source of renewable energy at that scale.

Of the estimated 19% of renewable energy as part of total final energy consumption used in the world in 2015, about half is unsustainable traditional biomass energy such as fuelwood. Worldwide an amazing 3 billion people still do not have access to clean energy for cooking, meaning that they prepare food on open woodfire. That leads to very poor indoor air quality which has a major health impact, particularly for women and children.

In Cambodia, 80% of Cambodian families in rural areas use wood fuel (wood and charcoal) for daily cooking. The industry sector also uses around 780,000 ton of firewood annually. In the garment industry, for example, firewood represented the main source of primary energy with up to 80% of the final energy consumed. GGGI is now looking at ways to green the Cambodian industry as part of its policy alignment for green growth project.

Can the bioeconomy be a driver of green growth?

Already, avoided deforestation, reforestation, peatland restoration are key priorities for the green growth strategies of GGGI member countries such as Colombia, Indonesia and Ethiopia. Modern, sustainable bioeconomy can be a key strategy to make this successful, as is underway in Colombia.

In addition, for many of GGGI’s Member and partner countries the traditional bioeconomy, agriculture and forestry, is still the backbone of the economy and responsible for 60-70% of employment, from Ethiopia to Senegal, Burkina Faso, Rwanda, Laos and Myanmar.

For all these countries innovation that significantly increases the value addition of their agricultural products, sustainably, or uses waste products smartly, will be critical to create the decent green jobs. It will be important for these countries to spot the opportunities early – to leapfrog their development rather than risk getting left behind.

Such technology foresighting related to key areas of green growth-related innovation is an important goal for GGGI. If the modern bioeconomy truly develops into the 4th industrial revolution, then many least developed countries are in a good position to take advantage and transform their economies towards an environmentally sustainable and socially inclusive development path. To achieve green growth, that is.