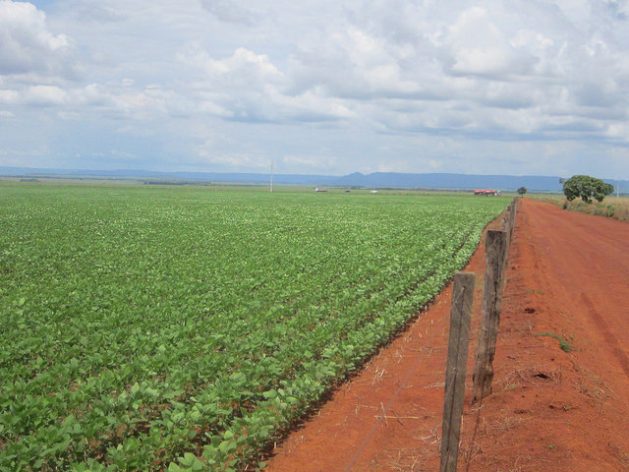 A soybean plantation in Tocantins, a state in central Brazil, where this monoculture crop is beginning to cover the best lands, following in the footsteps of the neighbouring state of Mato Grosso, the largest producer and exporter of soy and maize in the country, which "imports" the food it consumes from faraway areas. Credit: Mario Osava/IPS

RIO DE JANEIRO, Jun 16 2018 (IPS) - Brazil is one of the world’s largest agricultural producers and exporters, but its food supply has become seriously deficient due to food insecurity, unsustainability and poor nutrition, according to a number of studies.

A week-long nationwide strike by truck drivers, that began on May 21, revealed the precariousness of the food supply, which practically collapsed in the large Brazilian cities, at least in terms of perishable goods such as vegetables and eggs, said the National Agroecology Alliance (ANA).

Brazil ranks 28th out of 34 countries in the Food Sustainability Index (FSI), developed by the Italian Barilla Centre for Food and Nutrition, together with the British magazine The Economist’s Intelligence Unit.

"Monoculture agriculture, without interaction with the ecosystems, is based heavily on imports of inputs, including oil; it degrades the environment, causes erosion and deforestation, in contrast to agriculture as it was practiced in the past, which valued soil nutrients." -- Paulo Petersen

In Latin America, Colombia (13), Argentina (18) and Mexico (22) are the best rated, according to this index based on 58 indicators that measure three variables: sustainable agriculture, nutritional challenges and food waste.

But the United States, the world’s largest producer of agricultural products, also ranks only 21st in the FSI, reflecting the same discrepancy between agriculture and sustainable food, which is also not directly related to the countries’ per capita income levels.

“The Brazilian food system is unsustainable in environmental, social and economic terms,” said Elisabetta Recine, head of the National Council for Food and Nutritional Security (Consea), an advisory body to the president of Brazil, with two-thirds of its 60 members coming from civil society.

“Production has become increasingly concentrated, as well as trade. This means food has to be transported long distances, driving up costs and increasing the consumption of durable, industrialised and less healthy food in the cities,” Recine, who teaches nutrition at the University of Brasilia, told IPS.

This is well illustrated by the four supermarkets of the Kinfuku chain in the region of Alta Floresta, in the northern part of the state of Mato Grosso, located on the southern border of the Amazon rainforest.

They sell food transported weekly by truck from the southern state of Paraná, more than 2,000 km away, owner Pedro Kinfuku told IPS at one of their stores.

Mato Grosso is the country’s largest producer of maize and soy, monoculture crops destined mainly for export or for the animal feed industry, which monopolise local lands, driving out crops for human food.

This “long cycle of production and consumption” is part of the system whose insecurity was highlighted by the truck drivers’ strike over the space of just a few days, said Recine. 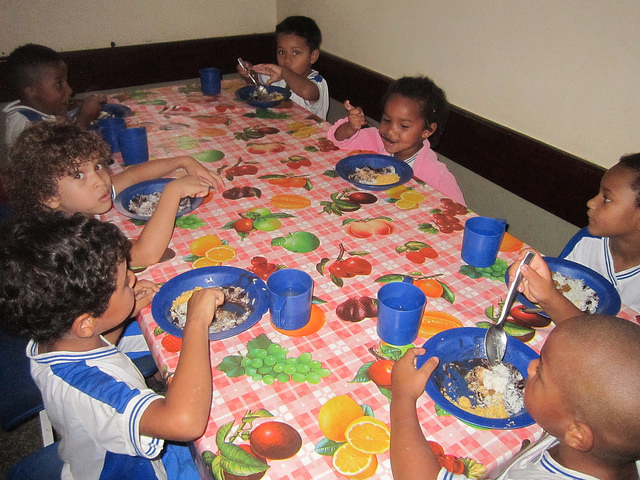 A group of children eat lunch at a school in Itaboraí, 45 km from Rio de Janeiro, Brazil, where thanks to the National School Meals Programme (PNAE) the students in public schools eat vegetables and fresh food from local family farms. Credit: Mario Osava/IPS

This phenomenon also concentrates wealth, generates little employment and increases social inequality in the country, while environmentally it exacerbates the use of agrochemicals, she said.

Brazil, which had managed to be removed from the United Nations Hunger Map in 2014, has once again seen a rise in malnutrition and infant mortality, in the face of “budget cuts in social programmes, growing unemployment and the general impoverishment of the population,” the nutritionist lamented.

At the same time, “obesity is increasing in all age groups throughout the country, directly related to the poor quality of food and the lack of preventive actions, such as the creation of healthy food environments, with regulations that restrict certain products,” said the president of Consea.

“We have to consider the food system from the soil and the seed to post-consumption, the waste,” she said.

The “structural problem” of the mode of production, the transport, distribution and consumption of food in the world today, particularly in Brazil, is the result of “two disconnects, one between agriculture and nature and the other between production and consumption,” said agronomist Paulo Petersen, vice-president of the Brazilian Association of Agroecology.

Monoculture agriculture, “without interaction with the ecosystems, is based heavily on imports of inputs, including oil; it degrades the environment, causes erosion and deforestation, in contrast to agriculture as it was practiced in the past, which valued soil nutrients,” he said in an interview with IPS.

For Petersen, consumption is increasingly moving away from agricultural production in physical distance, and also because of the processing chain, which is generating waste and “homogenising habits of consumption of ultra-processed foods and excess sugar, sodium, fats and preservatives, leading to obesity and non-communicable diseases.” 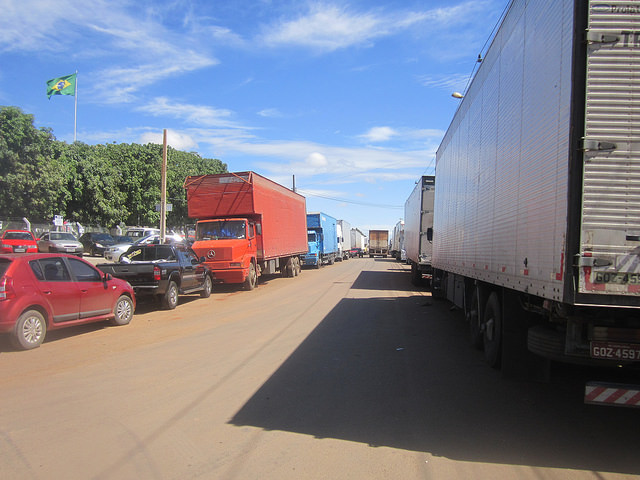 A large line of trucks slows down traffic in Anápolis, a logistics hub in central Brazil, at an intersection, where thousands of trucks circulate daily transporting food, industrial products and supplies, in all directions in this enormous country. Credit: Mario Osava/IPS

All of this, he said, has to do with climate change, the loss of biodiversity, growing health problems, the concentration of land ownership and the dominant power of agribusiness and large corporations.

“It is necessary to reorganise the food system, to change its logic, and that is the State’s obligation,” said Petersen, also executive coordinator of the non-governmental organisation Advisory Service for Alternative Agriculture Projects (ASPTA)- Family Agriculture and Agroecology, and member of the executive board of the National Agroecology Alliance (ANA) network.

Brazil launched positive actions in the food sector, such as the government’s School Meals Programme, which establishes a minimum of 30 percent of family farming products in the food offered by public schools to its students, thus improving the nutritional quality of their diet.

In addition, family farming was recognised as the source of most of the food consumed in the country, and a low-interest credit programme was created for this sector.

The problem, according to Petersen, is that this financing sometimes foments the same vices of industrial large-scale agriculture, such as monoculture and the use of agrochemicals.

There is a growing awareness of the negative aspects of agribusiness and the need for agro-ecological practices, as well as initiatives scattered throughout the country, but the dominant agricultural sector exercises its power in a way that blocks change, he said.

The bulk of agricultural credit, technical assistance, land concentrated in the hands of a few large landowners, and influence on state power all favour large-scale farmers, who also have the largest parliamentary caucus to pass “their” laws, Petersen said. 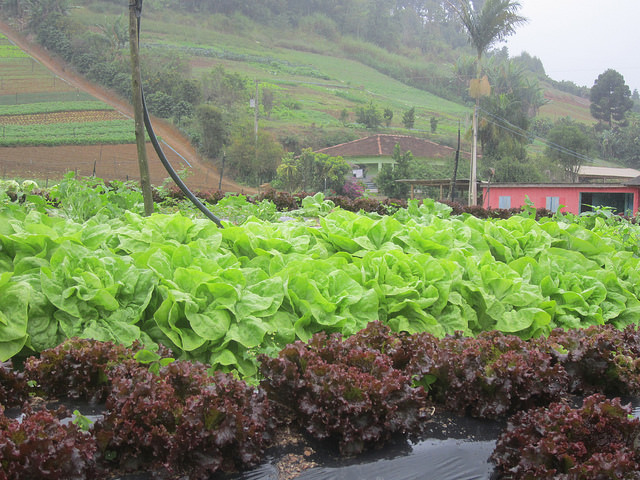 A vegetable garden in Santa Maria de Jetibá, of the 220-member Cooperative of Family Farmers of the Serrana Region, the largest supplier of vegetables and fruit to schools in the municipality of Vitoria, in the southeast of Brazil. Credit: Mario Osava/IPS

In Brazil, there are 4.4 million family farms, which make up 84 percent of rural establishments and produce more than half of the food, according to official figures.

But they have little influence in the government in the face of the power of a few dozen large producers.

Food banks are also an example of good, albeit limited, actions to reduce waste and the risks of malnutrition in the most vulnerable segments of the population.

They emerged from isolated initiatives in the 1990s and were adopted as a government programme in 2016, with the creation of the Brazilian Network of Food Banks, under the coordination of the Ministry of Social Development.

In 1994, the Social Trade Service (SESC), made up of companies in the sector, also began to create food banks in its own network, which it named Mesa Brasil (Brazil Board). By the end of 2017, it had 90 units in operation in 547 cities.

That year, the network served 1.46 million people per day and distributed 40,575 tons of food.

It is the largest network of such centres in the country, but it has proven insufficient in a country of 208 million people and 5,570 cities.

Mesa Brasil makes use of food that would no longer be sold by stores, because of commercial regulations, but which is in perfect condition, and delivers it to social institutions.

“It also promotes educational actions for workers and volunteers from social organisations and collaborators from donor companies,” on food and nutritional security, according to Ana Cristina Barros, SESC’s manager of aid at the national level.

“One of our biggest difficulties is the legal obstacles that prevent food companies from making donations, which are increasingly interested in doing so,” she told IPS.