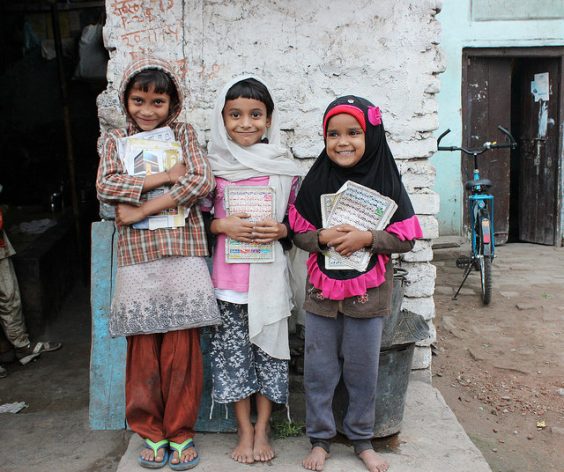 “When girls stay in school, HIV goes down, child marriages go down and sexual violence goes down,” shared Alice Albright, chief executive officer of Global Partnership for Education, a multi-stakeholder partnership and funding platform that aims to strengthen education systems in developing countries.

She was speaking at the side event ‘Keeping girls in school: What impact on the fight against HIV, tuberculosis and malaria?’, during the 2018 High-Level Political Forum on Sustainable Development at the United Nations Headquarters in New York, this July.

Agreeing with Albright, the spokesperson from the international NGO Camfed, or Campaign for Female Education, told IPS: “the cycle of poverty and ill health is perpetuated when girls don’t have access to quality education.”

The relationship between health and education among females has long concerned member states as an issue to address using the Sustainable Development Goals (SDGs) by 2030. The panel, which included Brian Flynn, deputy permanent representative of Ireland to the U.N.; Jens Frølich Holte, deputy minister, ministry of foreign affairs from Norway; Marijke Wijnroks, chief of staff at the Global Fund; Sonita Alizadeh, champion, Girls not Brides; Mohamed Sidibay, a youth representative; and Albright, emphasised a critical issue: keeping girls in school.

The U.N. Women’s report ‘Turning Promises into Action: Gender Equality in the 2030 Agenda for Sustainable Action’ revealed that 15 million primary-school age girls don’t learn to read or write in school (10 million boys don’t either); 15 million girls between the ages of 15 and 19 have been forced sexually; and 750 million women were married before they turned 18. These numbers can only go down with better and prolonged education, highlighted Albright.

Issues like child marriage, sexual abuse, lack of healthcare products, and responsibility for household chores create a greater disparity between boys and girls when it comes to education.

For Camfed, the reason these issues affect boys and girls differently seemed obvious. “Girls are different from boys in their level of vulnerability to sexual exploitation, especially in a context of rural poverty, where pressure to have transactional sex to raise money for food and school going costs can result in life threatening infections, early pregnancy, the life threatening complications resulting from this, early marriage, and domestic violence.”

With 2.4 million women between the ages of 15 and 24 living with HIV, addressing this issue seems more urgent than ever for political leaders.

A year of education can change a girl’s life completely. According to the U.N. Children’s Fund (UNICEF), an extra year of secondary school can increase a woman’s income by 15 percent in the future, generating a virtuous cycle. However, it is very hard for a girl to access that extra year. She would have less time to study, as her household chores might occupy most of her time and families will count on her daily work, which can be interrupted if she attends school.

“Secondary schools are few and far between in rural areas, and the long and tiring walk to school can also be dangerous for girls (sexual exploitation, dangerous rivers to cross, wild animals). In addition, most schools in rural sub-Saharan Africa are ill equipped to support girls while they are menstruating,” the Camfed spokesperson told IPS when asked what other obstacles a girl child has to overcome to access education.

But once that education is accessed, the consequences are hugely beneficial.

“Educated girls are less likely to marry or have children early; they are better able to protect themselves from HIV and AIDS, from sexual exploitation and abuse. Educated women are far less likely to die in childbirth and far more likely to have healthy babies who survive their infancy and thrive,” he added.

Safeena Husain, founder of Educate Girls, an NGO in India that has helped 200,000 girls to return to school since 2007, also shared her organisation’s experience with girls’ education with IPS.

“We do see that with more girls in school they are getting married later. These educated girls feel empowered to make informed decisions and stand up for their rights,” she said.

As an example, Husain commented: “Some girls who we managed to enrol and stay in school through primary education made a conscious decision to call off their engagement to boys who were less educated. It’s a brave move for a girl living in a rural, patriarchal society where she has seen women covered under the veil all her life.”

Most importantly for her, the effects of education are long-term and affect society as a whole.

As to who should be the stakeholder leading these changes in girls’ education, the answers vary. National governments, civil society groups and the private sector—through investments—all have a role to play.

For the UNICEF spokesperson, the key lies within national political leadership.

“We help countries build stronger education systems that deliver quality education to boys and girls,” he said, adding that making sure that national education plans and policies consider gender was key to ensuring that girls and boys alike enter and succeed at school.

Gender could be taken into account, he explained, by removing gender stereotypes from learning materials or educating teachers on the importance of gender biases.

Damji, from U.N. Women, believes civil society is crucial. While Camfed believes that both governments and civil society must interact: “Policy needs to be driven by the expertise of girls and young women who face these barriers, and we need local coalitions to break them down, holistically, with all duty bearers involved: parents, schools, local and traditional leaders, local and national education authorities, social and health workers,” the Camfed spokesperson concluded.

It is Hussain, from Educate Girls, who advocates for the collaboration between these three political actors, including the firms and enterprises.

“The private sector can bring funding and a risk-taking appetite to help fuel innovation and evidence building about what works. Civil society is closest to where the problems lie, they have the community access and know the community voice.

“Once solutions have been found, real scale will only happen when the government gets involved and either integrates the change into policy or funds the delivery of solutions at scale.”