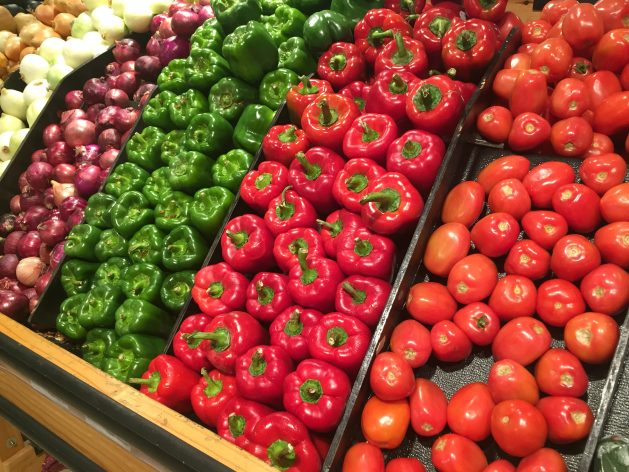 Fruit and vegetable prices in South Africa have increased to the point that poorer people have had to remove them from their grocery lists. Credit: Nalisha Adams/IPS

JOHANNESBURG, Aug 10 2018 (IPS) - Every Sunday afternoon, Thembi Majola* cooks a meal of chicken and rice for her mother and herself in their home in Alexandra, an informal settlement adjacent to South Africa’s wealthy economic hub, Sandton.

“Vegetables is only on Sunday,” Majola tells IPS, adding that these constitute potatoes, sweet potato and pumpkin. Majola, who says she weighs 141 kgs, has trouble walking short distances as it generally leaves her out of breath. And she has been on medication for high blood pressure for almost two decades now.

“It is precisely a justice issue because at the very least our economy should be able to provide access to sufficient and nutritious food. Because, at the basis of our whole humanity, at the very basis of our body, is our nutrition." -- Mervyn Abrahams, Pietermaritzburg Economic Justice and Dignity Group

“Maize is a first priority,” she says of the staple item that always goes into her shopping basket. “Every Saturday I eat boerewors [South African sausage]. And on Sunday it is chicken and rice. During the week, I eat mincemeat once and then most of the time I fill up my stomach with [instant] cup a soup,” she says of her diet.

Majola is one of about 68 percent of South African women who are overweight or obese, according to the South African Demographic and Health Survey. The Barilla Centre for Food and Nutrition’s Food Sustainability Index (FSI) 2017 ranks 34 countries across three pillars: sustainable agriculture; nutritional challenges; and food loss and waste.  South Africa ranks in the third quartile of the index in 19th place. However, the country has a score of 51 on its ability to address nutritional challenges. The higher the score, the greater the progress the country has made. South Africa’s score is lower than a number of countries on the index.

Families go into debt to pay for basic foods

Many South Africans are eating a similar diet to Majola’s not out of choice, but because of affordability.

Dr. Kirthee Pillay, lecturer of dietetics and human nutrition at the University of KwaZulu-Natal, tells IPS that the increase of carbohydrate-based foods as a staple in most people’s diets is cost-related.

“Fruit and vegetable prices have increased to the point that poorer people have had to remove them from their grocery lists.”

The Pietermaritzburg Agency for Community Social Action (Pacsa), a social justice non-governmental organisation, noted last October in its annual food barometer report that while the median wage for black South Africans is USD209 a month, a monthly food basket that is nutritionally complete costs USD297.

The report also noted that food expenditure from households arise out of the monies left over after non-negotiable expenses, such as transport, electricity, debt and education needs have been paid first. And this resulted in many families incurring debt in order to meet their food bills.

“Staples are cheaper and more filling and people depend on these, especially when there is less money available for food and many people to feed. Fruit and vegetables are becoming luxury food items for many people given the increasing cost of food. Thus, the high dependence on cheaper, filling staples. However, an excessive intake of carbohydrate-rich foods can increase risk for obesity,” Pillay tells IPS via email.

Majola works at a national supermarket chain, with her only dependent being her elderly mother. She says her grocery bill comes to about USD190 each month, higher than what most average families can afford, but agrees that the current cost of fruit and vegetables are a luxury item for her.

“They are a bit expensive now. Maybe they can sell them at a lesser price,” she says, adding that if she could afford it, she would have vegetables everyday. “Everything comes from the pocket.”

David Sanders, emeritus professor at the school of public health at the University of the Western Cape, says that South Africans have a very high burden of ill health, much of which is related to their diet.

But he adds that large corporates dominate every node of the food chain in the country, starting from inputs and production, all the way to processing, manufacturing and retail. “So it is monopolised all the way up the food system from the farm to the fork.”

“The food system is creating, for poor people anyway, a quite unhealthy food environment. So for well-off people there is sufficient choice and people can afford a nutritionally-adequate diet, even one of quite high quality.

“But poor people can’t. In most cases, the great majority, don’t have a kind of subsistence farming to fall back on because of land policies and the fact that in the 24 years of democracy there hasn’t been significant development of small scale farming,” Sanders, who is one of the authors of a report on food systems in Brazil, South Africa and Mexico, tells IPS.

According to the report, about 35,000 medium and large commercial farmers produce most of South Africa’s food.

In addition, Sanders points out that a vast majority of rural South Africans purchase, rather than grow, their own food.

“The food they can afford tends to be largely what we call ultra processed or processed food. That often provides sufficient calories but not enough nutrients. It tends to be quite low often in good-quality proteins and low in vitamins and minerals – what we call hyper nutrients.

“So the latter situation results in quite a lot of people becoming overweight and obese. And yet they are poorly nourished,” Sanders explains.

The Sugar Tax Not Enough to Stem Epidemic of Obesity

In April, South Africa introduced the Sugary Beverages Levy, which charges manufacturers 2.1 cents per gram of sugar content that exceeds 4g per 100 ml. The levy is part of the country’s department of health’s efforts to reduce obesity.

Pillay says while it is still too early to tell if the tax will be effective, in her opinion “customers will fork out the extra money being charged for sugar-sweetened beverages. Only the very poor may decide to stop buying them because of cost.”

Sander’s points out “it’s not just the level of obesity, it is the rate at which this has developed that is so alarming.”

A study shows that the number of young South Africans suffering from obesity doubled in the last six years, while it had taken the United States 13 years for this to happen.

“Here is an epidemic of nutrition, diet-related diseases, which has unfolded extremely rapidly and is just as big and as threatening and expensive as the HIV epidemic, and yet it is going largely unnoticed.”

Overweight people have a risk of high blood pressure, diabetes and hypertension, which places them at risk for heart disease. One of South Africa’s largest medical aid schemes estimated in a report that the economic impact on the country was USD50 billion a year.

“Even if people knew what they should eat there is very very little room for manoeuvre. There is some, but not much,” Sanders says adding that people should rather opt to drink water rather than purchase sugary beverages.

“Education and awareness is a factor but I would say that these big economic drivers are much more important.”

Sanders says that questions need to be asked about how the control of the country’s food system and food chain can “be shifted towards smaller and more diverse production and manufacture and distributions.”

“Those are really the big questions. It would require very targeted and strong policies on the part of government. That would be everything from preferentially financing small operators [producers, manufacturers and retailers]…at every level there would have to be incentives, not just financial, but training and support also,” he says.

Pillay agrees that the increase in food prices “needs to be addressed as it directly influences what people are able to buy and eat. … Sustainable agriculture should assist in reducing the prices of locally-grown fruit and vegetables and to make them more available to South African consumers.”

Mervyn Abrahams, one of the authors of the Pacsa report, now a programme coordinator at the Pietermaritzburg Economic Justice and Dignity Group, tells IPS that the organisation is campaigning for a living wage that should be able to provide households with a basic and sufficient nutrition in their food basket. The matter, he says, is one of economic justice.

“It is precisely a justice issue because at the very least our economy should be able to provide access to sufficient and nutritious food. Because, at the basis of our whole humanity, at the very basis of our body, is our nutrition. And so it is the most basic level by which we believe that the economy should be judged, to see whether there is equity and justice in our economic arena.”