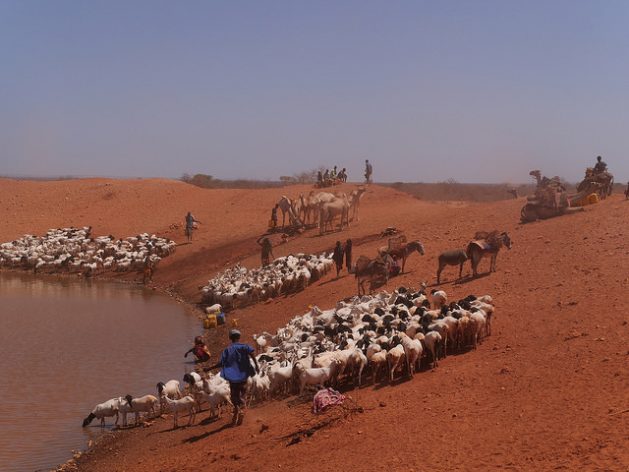 The pastoralists of Ethiopia’s Somali region make a living raising cattle, camels and goats in an arid and drought-prone land. They are forced to move constantly in search of pasture and watering holes for their animals. Ahead of COP 24, African experts have identified the need to speak with one unified voice, saying a shift in the geopolitical landscape threatens climate negotiations. Credit: William Lloyd-George/IPS

NAIROBI, Oct 18 2018 (IPS) - In December 2015, nations of the world took a giant step to combat climate change through the landmark Paris Agreement. But African experts who met in Nairobi, Kenya at last week’s Seventh Conference on Climate Change and Development in Africa (CCDA VII) say the rise of far-right wing and nationalist movements in the West are threatening the collapse of the agreement.
The landmark Paris Agreement focuses on accelerating and intensifying actions and investments needed for a sustainable low carbon future, through greenhouse-gas emissions mitigation, adaptation, finance, and technology transfer among others.

And as Parties struggle to complete the implementing measures needed to get the Paris regime up and running, African experts have identified the need to speak with one unified voice, saying a shift in the geopolitical landscape threatens climate negotiations.

“The rise of ‘the inward-looking nationalist right-wing movement and climate deniers’ in the West is a signal of hardening positions in potential inaction by those largely responsible for the world’s climate problems,” Mithika Mwenda, secretary general of the Pan-African Climate Justice Alliance, told the gathering.

Mwenda said civil society organisations were seeking collaboration with governments on the continent and stood ready to offer support as Africa seeks homegrown solutions to mitigate the effects of climate change.

“Our leaders who hold the key for the effective implementation of the Paris Agreement should remain candidly focused and resist attempts to scatter the unified African voice to deny Africa a strong bargain in the design of the Paris rulebook,” Mwenda told IPS in an interview.

The 24th Conference of the Parties (COP 24) to the United Nations Framework Convention on Climate Change (UNFCCC) to be held in Katowice, Poland in December, is earmarked as the deadline for the finalisation of the Paris Agreement operational guidelines.

But there are concerns from the African group that there is a deliberate attempt by developed parties to derail the process as the operationalisation of the agreement implies a financial obligation for them to support the adaptation and mitigation action of developing countries.

Since 2015 when the Paris Agreement was reached, the world has seen a shift in the geopolitical landscape, ushering in a climate-sceptic Donald Trump as president of the United States, and several far-right wing nationalist movements gaining power in Europe.

“Two strong groups have joined forces on this issue – the extractive industry, and right-wing nationalists. The combination has taken the current debate to a much more dramatic level than previously, at the same time as our window of opportunity is disappearing,” said Martin Hultman, associate professor in Science, Technology and Environmental studies at Chalmers University of Technology and research leader for the comprehensive project titled ‘Why don’t we take climate change seriously? A study of climate change denial’.

For his part, Trump made good on his campaign promise when he wrote to the UNFCCC secretariat, notifying them of his administration’s intention to withdraw the United States from the treaty, thereby undermining the universality of the Paris Agreement and impairing states’ confidence in climate cooperation.

With this scenario in mind, the discussions at the recently-concluded climate conference in Africa were largely dominated by how the continent could harness homegrown solutions and standing united in the face of shifting climate political dynamics.

In his opening remarks, which he delivered on behalf of Kenya’s President Uhuru Kenyatta, Kenya’s environment and forestry minister, Keriako Tobiko said climate change was a matter of life and death for Africa.

And this was the reason why leaders needed to speak with a strong unified voice.

“We have all experienced the devastating and unprecedented impacts of climate change on our peoples’ lives and livelihoods as well as our national economies. Africa is the most vulnerable continent despite contributing only about four percent to global greenhouse gas (GHG) emissions but when we go to argue our case we speak in tongues and come back with no deal,” he said.

He said given Africa’s shared ecosystems, it was essential to speak in one voice to safeguard the basis of the continent’s development and seek transformative solutions.

This climate conference was held just days after the release of the Intergovernmental Panel on Climate Change (IPCC) special report on Global Warming of 1.5 degrees Celsius which warned of a catastrophe if immediate action is not taken to halt GHG emissions.

And commenting on the IPCC report, Tobiko reiterated the resolutions of the first Africa Environment Partnership Platform held from Sept. 20 to, under the auspices of the New Partnership for Africa’s Development, the technical body of the African Union, which emphasised the need to turn environmental challenges into economic solutions through innovation and green investments.

Tobiko said that Kenya would be hosting the first Sustainable Blue Economy Conference from Nov. 26 to 28 to promote sustainable investments in oceans, seas, lakes, and rivers.

Just like the Africa Environment Partnership Platform — which recognised “indigenous knowledge and customary governance systems as part of Africa’s rich heritage in addressing environmental issues” — indigenisation was also a trending topic at the CCDA VII.

Under the theme: ‘Policies and actions for effective implementation of the Paris Agreement for resilient economies in Africa’, the conference attracted over 700 participants from member states, climate researchers, academia, civil society organisations and local government leaders, among others.
Experts said that local communities, women and the youth should be engaged in Africa’s efforts to combat the vagaries of climate change.

James Murombedzi, officer-in-charge of the Africa Climate Policy Centre of the U.N. Commission for Africa, said African communities have long practiced many adaptation strategies and viable responses to the changing climate.

However, he said, “there are limits to how well communities can continue to practice adaptive livelihoods in the context of a changing climate”, adding that it was time they were supported by an enabling environment created by government-planned adaptation.

“That is why at CCDA-VII we believe that countries have to start planning for a warmer climate than previously expected so this means we need to review all the different climate actions and proposals to ensure that we can in fact not only survive in a 3 degrees Celsius warmer environment but still be able to meet our sustainable development objectives and our Agenda 2063,” added Murombedzi.

Murombedzi said it was sad that most African governments had continued spending huge sums of money on unplanned adaptations for climate-related disasters.

And these, according Yacob Mulugetta, professor of Energy and Development Policy, University London College, “are the implications of global warming for Africa which is already experiencing massive climate impacts, such as crop production, tourism industries and hydropower generation.”

Mulugetta, one of the lead authors of the IPCC special report, however, noted that “international cooperation is a critical part of limiting warming to 1.5 degrees,” but warned African climate experts to take cognisance of the shifting global geopolitical landscape, which he said is having a significant bearing on climate negotiations.

James Kinyangi of the AfDB said the Bank’s Climate Action Plan for the period 2016 to 2020 was ambitious, as it “explores modalities for achieving adaptation, the adequacy and effectiveness of climate finance, capacity building and technology transfer – all aimed at building skills so that African economies can realise their full potential for adaptation in high technology sectors.”

Under this plan, the bank will nearly triple its annual climate financing to reach USD5 billion a year by 2020.