Making Every Euro Count in the Fight Against Malnutrition

More money, and better spent, is what we need to end hunger and malnutrition 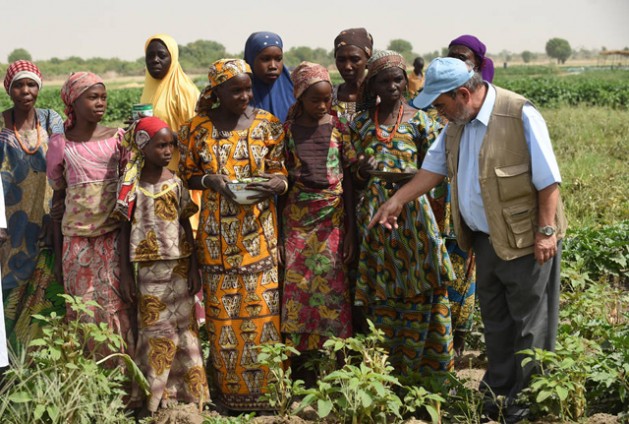 Graziano da Silva with a group of women who are participating in a vegetable-growing project in Borno State, north-eastern Nigeria. Credit: FAO/Carlos Laorden

ROME, Oct 3 2018 (IPS) - Everybody wants to end hunger. That is what all UN-member countries stated when signing the 2030 Agenda for a better world: the second of its 17 goals aims at eradicating all forms of malnutrition (which include overweight, obesity or micronutrient deficiencies) and ensuring that everybody has access to nutritious and healthy foods.

Along with these good intentions, we have in recent decades seen real efforts and concrete commitments that have led to steady progress in this battle. Recent reports produced by FAO and other UN agencies, however, give us little cause for celebration. In 2017, the world was home to 821 million hungry people, almost 2.2 billion overweight people and 670 million obese adults (and this number is rising). On top of that, at least 1.5 billion people suffer from micronutrient deficiencies that undermine their health and lives.

What do we really need to do to eradicate all forms of malnutrition?

Governments can’t do it on their own, nor can those with deep pockets acting alone. The same applies to international agencies, NGOs, civil society and/or the private sector working. We really need to combine and align our efforts.

In the first place, we need to acknowledge that this battle should receive high priority. The fight against hunger should not slip down in the list of global priorities such as climate change, migrations or population growth.

Addressing those challenges must in no way mean that we put aside our efforts to guarantee every human’s fundamental right to food, especially as the latter has a strong impact on the other challenges.

Secondly, we need more funds. It takes money to make things happen and Governments —the real game-changers— need resources to pave the way towards environmentally, economically and socially sustainable food systems. With so many priorities arising, though, funding is not enough. (Some $24.7 billion were needed to address humanitarian emergencies in 2017 alone, according to UN estimates.)

Nevertheless, just as it’s not enough to buy seeds to assure a good harvest, allocating funds will not suffice to eradicate all forms of malnutrition. Achieving that goal lies in making sure that the public policies and actions we take are truly effective.

In short, what’s needed is an enabling environment where funds can flourish and lead to significant progress. In other words, we do not just need to buy seeds, but to find fertile soil, prepare the ground, water the fields and take good care of them so that we gather big returns.

In this interconnected world, that is no task for anyone to do alone. Governments can’t do it on their own, nor can those with deep pockets acting alone. The same applies to international agencies, NGOs, civil society and/or the private sector working. We really need to combine and align our efforts. That is the aim, for example, of the FIRST Programme, which assists Governments to design policies and create environments where food and nutrition security can flourish.

In FIRST, an important partner like the European Union and FAO, join forces side by side with Government officials in around 30 countries (from Cambodia to Chad and from Honduras to Afghanistan).

Food production should be done in a way that is sustainable and generates dividends in other areas. Policies towards eradicating hunger need to address every element of the food system. For example, boosting Nile perch production and exports in Lake Victoria will have little positive effect on food security if the benefits of those activities do not reach local communities.

Likewise, giving Guatemalan family farmers technical and financial support will not contribute to alleviate undernourishment if it does not include a gender perspective and considers the challenges that female rural farmers face and their key role in their households’ nourishment. Similarly, focusing too much on producing staple foods like rice or forgetting to promote the availability of diverse and nutritious fresh foods will unlikely result in a better nutritional status.

Even when priorities pile up on our agendas, we must not leave aside food and nutrition, which lie at the heart of life, health and development. To be sure, we are equally obliged to make the most out of every euro we spend on this front, and ensure that it leads to sustainable and long-term positive effects that reach everybody, especially the most vulnerable. There is no time —nor money— to be wasted.