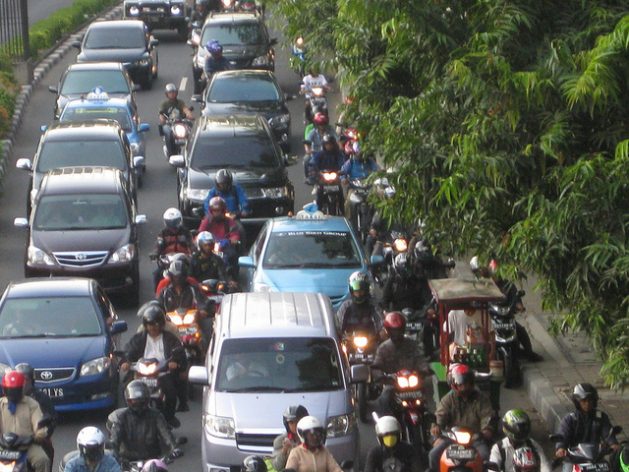 A traffic jam, in Indonesia's capital Jakarta. Air pollution in Jarkarta is triple the the maximum “safe” level recommended by the World Health Organisation. The country's government says it is committed to making the switch to renewables. Credit: Alexandra Di Stefano Pironti/IPS

KATOWICE, Poland, Dec 11 2018 (IPS) - Although Indonesia has attained decent economic growth of over five percent in the last decade, in order to ensure sustainable growth in the future the switch to renewable energy (RE) will be critical, says the country’s government.
“If we don’t focus on low carbon development, we cannot continue this growth,” Bambang Brodjonegoro, Indonesia’s Minister of National Development Planning, said yesterday Dec. 10.

He spoke about Indonesia’s shift to a low carbon, climate-friendly development pathway at a high-level panel discussion at the 24th Conference of the Parties to the United Nations Framework Convention on Climate Change (COP24), which is currently being held in Katowice, Poland. The panel discussion was organised by the Global Green Growth Institute (GGGI), in partnership with the Ministry of National Development Planning of the Republic of Indonesia (BAPPENAS).

The latest report by the Intergovernmental Panel on Climate Change (IPCC) warns of catastrophic climatic impacts if global warming is not kept below 1.5 degrees Celsius. This will include severe impact on food production and increasing risks of climate-related disasters.

There is a large scope for RE development in Indonesia, as most of its potential is unrealised as of now. According to the International Renewable Energy Agency (IRENA) report on Indonesia’s RE prospects, the country has “an estimated 716 GW of theoretical potential for renewable energy-based power generation”. But of its bioenergy potential of 32.7 GW, it has developed a mere 1.8 GW.

“In order to provide the electricity for remote areas, this is a good time to promote renewable energy as this will increase the percentage of renewable energy in our energy mix,” Brodjonegoro said.

According to the minister, a key issue for scaling up RE in Indonesia lies with developing the capacity of stakeholders to meet the needs of different types of investors to access finance. 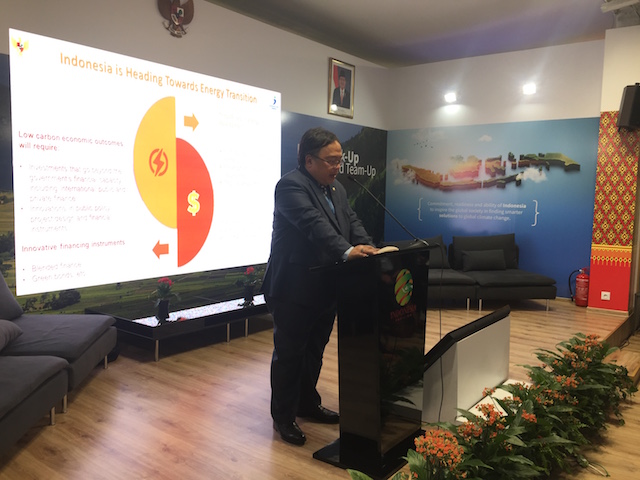 Bambang Brodjonegoro, Indonesia’s Minister of National Development Planning, said the switch to renewable energy is critical for his country’s sustainable economic growth. He was speaking at a panel discussion held at COP24 in Katowice, Poland. Credit: Sohara Mehroze Shachi/IPS

Dr. Frank Rijsberman, Director General of GGGI, echoed these thoughts, stating that the critical factor for proliferating renewables in Indonesia is whether it can attract private sector investment.

“Both governments and the private sector have not fully incorporated the idea that green growth is not only nice but it is also affordable,” he said. “Businesses should be investing in renewable energy because there is a business opportunity.”
In this regard, he said that blended finance could be a critical path where every dollar investment from donors could catalyse other investments from private sources.

State Secretary for Climate and Environment in Norway Sveinung Rotevatn, was a panelist at the event. He stated that Norway is encouraged by the low carbon development in Indonesia, and is committing substantial funds to reduce deforestation there. According to Global Forest Watch, Indonesia experienced a drop in tree cover loss in 2017, including a 60 percent decline in primary forest loss. The organisaiton said that this could be in part to the 2016 government moratorium on the conversion of peatland.

“As a developed country we see [Norway] as having a responsibility to contribute,” he said. Norway has been working in partnership with Indonesia since 2010.

The future of oil is not bright, and Rotevatn believes the shift in production to gas from coal could be a useful bridge towards a shift to renewables in the long run. He added that resistance in this transition from fossil fuels to renewables is expected.

“In 1991 Norway introduced a carbon tax. Today we consider it a natural thing but implementing it is always hard,” he said. One estimate from the Norwegian environmental agency shows that since Norway reduced emissions in 1991 it continued healthy economic growth.

However, Indonesia has a long way to go in the transition process as over 90 percent of its energy still comes from fossil fuels. But the government is optimistic of its potential to scale up RE.

“We are focusing on incentivising renewable energy production and increasing infrastructure of renewable energy capacity. We have a lot of isolated islands and remote areas which can be utilised,” said Rida Mulyana, Director General of New, Renewable Energy and Energy Conservation (NREEC) at Indonesia’s Ministry of Energy and Mineral Resources.

However, he noted that several challenges remain. One of these is public acceptance, as there is still a need for systematic and sustainable socialisation and education to minimise community resistance to RE projects.

Moreover, affordability of the available clean energy remains an issue, and the cost needs to be reduced for renewables to be a viable option. This is exacerbated by the fact that liquified petroleum gas is still subsidised, which fosters Indonesia’s dependency on fossil fuels.

While Mulayana pointed out financing as a key issue, he also said the government will not provide any subsidy for renewables and it has to compete with other sources of energy.

David Kerins, Senior Energy Economist at the European Investment Bank and another panelist at the event, said although RE projects are becoming more commercially viable, the private sector is yet to jump in on these investment opportunities. So there is a need to promote investment while providing safeguards to investors on the expected benefits.

“The RE energy sector has moved far beyond the situation it was before. Once people see how possible and straight forward it is, private sector can start targeting projects of its own,” he said.

Glenn Pearce-Oroz, Director for Policy and Programmes, Sustainable Energy for All (SEforALL), one of the attendees of the event, said one of the important next steps will be how to bring along commercial financing for low carbon development.

“Part of what we are seeing is private sector being more and more interested to do business in the green economy. What they are looking for though is clarity of roles and consistency in terms of the markets they are getting into,” he said.

“So the challenge for developing countries is how do you demonstrate that type of consistency and clarity and how do you establish clear rules of the game, good regulatory frameworks, that gives private sector the confidence to come into these markets?” He said Indonesia has the size, dynamism of economy and a lot of favourable elements for attracting private sector investment.

“Green growth as a concept is beginning to take off in different countries,” said Dr. Saleemul Huq, Director of the International Centre for Climate Change and Development (ICCCAD) and a 24-time COP attendee.

“The most important element of any green growth strategy is to make sure it’s nationally determined and nationally owned,” he said, adding that modality of green growth is peculiar to the politics, socio economic conditions and culture of a country.

“Green growth is more of a political process than a technical process. There are vested interests and issues that have to be worked out at the national level,” he said. “The good news is it [green growth] has started to happen.”