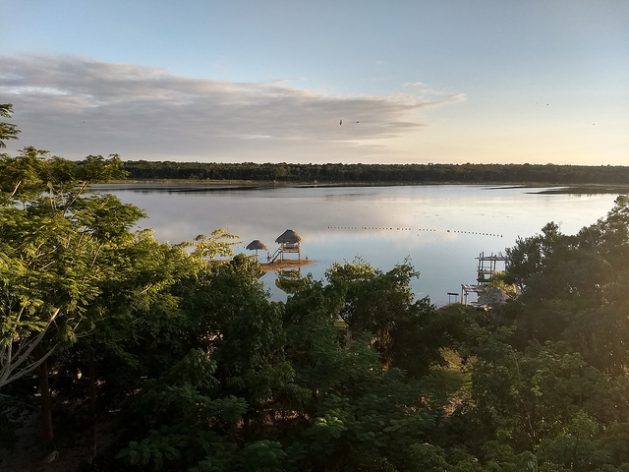 Ecosystems such as the Síijil Noh Há (where water is born, in the Mayan tongue) lagoon, in Felipe Carrillo Puerto on the Yucatán peninsula, are suffering the impacts of climate change in one of the most vulnerable of Mexico's municipalities to the phenomenon. Credit: Emilio Godoy/IPS

FELIPE CARRILLO PUERTO, Mexico, Jan 17 2019 (IPS) - “I couldn’t plant my cornfield in May, because it rained too early. I lost everything,” lamented Marcos Canté, an indigenous farmer, as he recounted the ravages that climate change is wreaking on this municipality on Mexico’s Caribbean coast.

The phenomenon, caused by human activities related especially to the burning of fossil fuels, has altered the ancestral indigenous practices based on the rainy and dry seasons for the “milpa” – the collective cultivation of corn, pumpkin, beans and chili peppers, the staple crops from central Mexico to northern Nicaragua.

It has also modified the traditional “slash and burn” technique used to prepare the land for planting.

Canté, a representative of the Xyaat ecotourism cooperative, told IPS that “climate change affects a lot, the climate is changing too much. It’s no longer possible to live off of agriculture.” As he talks, he prepares for the new planting season, hoping that the sky will weep and water the furrows.

The farmer lives in the Señor eijido in the municipality of Felipe Carrillo Puerto (FCP) in the southeastern state of Quintana Roo. Señor is home to about 450 “ejidatarios” or members of the ejido, a traditional Aztec system of collectively worked lands that can be sold.

This state and its neighbors Campeche and Yucatán comprise the Yucatán peninsula and are highly vulnerable to the effects of climate change, as are the states of Tamaulipas, Veracruz and Tabasco, on the Gulf of Mexico which, along with the Caribbean Sea, make up Mexico’s Atlantic coast.

These consequences include rising temperatures, more intense and frequent hurricanes and storms, rising sea levels due to the melting of the Arctic Ocean, droughts and loss of biodiversity.

In addition, this peninsular region suffers the highest rate of deforestation in the country, and government subsidies have failed to change that, according to the report “Forest subsidies without direction,” released in December by the non-governmental Mexican Civil Council for Sustainable Agriculture.

The peninsula is home to the largest remaining tropical rainforest outside of the Amazon, and is a key area in the conservation of natural wealth in Mexico, which ranks 12th among the most megadiverse countries on the planet.

María Eugenia Yam, another indigenous resident of FCP, a municipality of 81,000 inhabitants, concurred with Canté in pointing out to IPS with concern that “the rains are no longer those of the past and it is no longer possible to live off of the milpa.”

Yam, an employee of the Síijil Noh Há (where water sprouts, in the Mayan tongue) cooperative, owned by the Felipe Carrillo Puerto ejido, in the municipality of the same name, lamented that agricultural production is declining, to the detriment of the peasant farmers in the area who also grow cassava and produce honey. A trail in the Síijil Noh Há (where the water is born, in the Mayan tongue) community reserve in Felipe Carrillo Puerto, in the southeastern state of Quintana Roo, part of the Yucatán peninsula in Mexico. The conservation of the jungle is a climate change adaptation measure, because it contributes to maintaining steady temperatures and curbing the onslaught of hurricanes. Credit: Emilio Godoy/IPS

The three states of the peninsula produce a low level of greenhouse gas emissions (GHG). The biggest polluter is Campeche, producing 14.5 million tons of GHGs, responsible for global warming. It is followed by Yucatán (10.9 million) and Quintana Roo (3.48 million), according to the latest measurements carried out by the state governments.

In 2016, Mexico emitted 446.7 million net tons of GHG into the atmosphere, according to the state-run National Institute of Ecology and Climate Change (INECC).

Within the peninsula, the state of Yucatan has 17 municipalities vulnerable to climate change, Campeche, 10, and Quintana Roo, three, including FCP. In total, 480 Mexican municipalities are especially vulnerable to the phenomenon, out of the 2,457 into which the country is divided, according to an INECC report.

In Campeche, the State Climate Change Action Programme 2030 predicts a temperature increase of between 2.5 and four degrees Celsius between 1961 and 2099, with impacts on communities, economic activities and natural wealth.

Also, the 2012 study “Impacts of the increase in mean sea level in the coastal area of the state of Campeche, Mexico”, prepared by the World Bank and the state government, warns that vulnerability to the rising sea level affects 440,000 people, more than half of the local population.

“Climate change will increase flooding and coastal erosion in the future” and the probability of extreme storm surges on the coasts will increase, according to the study, which predicts a rise in water level between 0.1 to 0.5 meters in 2030 and from 0.34 to one meter in 2100.

The state of Yucatan faces a similar scenario, with the average annual temperature rising between 0.5 and 0.8 degrees for the period 2010-2039. Annual rainfall will alternate drops of up to nearly 15 percent and rises of one percent in that period.

Although the three states have instruments to combat the phenomenon, such as climate change laws -with the exception of Campeche-, special programmes and even a regional plan, the situation varies widely at a local level, as many municipalities lack such measures.

The Climate Change Strategy for the Yucatan Peninsula, drawn up by the three state governments, aims for the development of a regional adaptation strategy, the implementation of the regional programme to reduce emissions from deforestation and forest degradation, and the creation of a climate fund.

The region launched the Yucatan Peninsula Climate Fund in September 2017, but it is just beginning to operate.

So far, the scrutiny of the implemented actions has been a complex task.

The “Strategic Evaluation of the Subnational Progress of the National Climate Change Policy,” published by INECC in November, which investigated three municipalities on the peninsula, concluded that state and municipal authorities report multiple adaptation actions, but without clarifying how vulnerability is addressed.

For this reason, it considers the creation and promotion of capacities to face climate change to be an “urgent need”.

“We have to make everything more sustainable, but it’s a local effort. If those who govern and make decisions had more awareness, we would be able to do it,” said Canté.

Yan proposed reforesting, reducing garbage generation, conserving biodiversity and educating children about the importance of environmental care. “Maintaining the forest is a good adaptation measure. But the municipalities should have climate programmes and appoint officials who know” about the issue, he suggested.