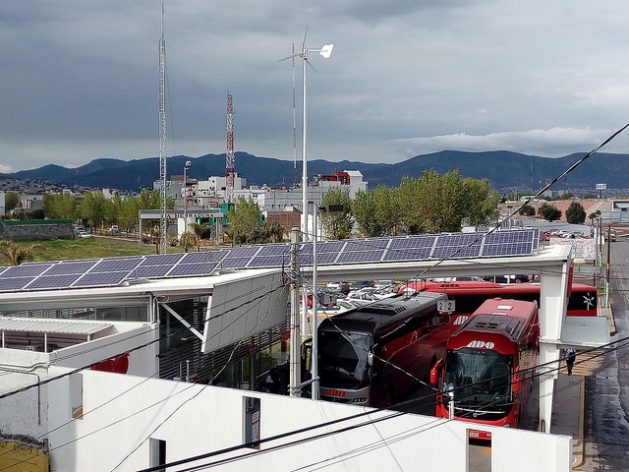 Latin America has increased the use of renewable energies, but not enough to meet the voluntary commitments for reducing GHG emissions; View of a transportation company’s station that uses solar panels, in the city of Pachuca, Mexico. Credit: Emilio Godoy/IPS

MEXICO CITY, Oct 25 2017 (IPS) - Difficult to measure and unequal in their scope are the advances that the countries of Latin America will have to show, regarding their voluntary commitments to greenhouse gas emissions, during the climate summit to be hosted by Bonn, Germany in November.

The so-called intended nationally-determined contributions (INDCs) are considered insufficient to reach the goal of stabilising the planetary temperature rise at two degrees Celsius.

But the region also has contradictory policies, such as increasing the extraction of fossil fuels while at the same time promoting the use of renewable energies.

“There are countries that have made progress with respect to their commitments, although it is a bit difficult to say how much. It is not so easy to measure. It depends on the ability of each government to do so. Some countries are more transparent and exhaustive than others,” Lisa Viscidi, director of the Energy, Climate Change and Extractive Industries Programme at the Inter-American Dialogue, a Washington-based organisation, told IPS.

Throughout 2015, the 195 State parties to the United Nations Framework Convention on Climate Change (UNFCCC) presented their INDCs with their voluntary commitments to reduce greenhouse gases (GHGs), which were incorporated into the binding Paris Agreement, in December of that year.

The historic agreement was drawn up as a conclusion to the 21st Conference of the Parties (COP21) of the UNFCCC, held in the French capital, and formally signed the following April, at a special United Nations meeting in New York.

The Climate Action Tracker (CAT), an independent science-based assessment that tracks the emission commitments and actions of countries and was produced by three European research centres, rates Costa Rica’s proposal as “compatible” with the Paris Agreement commitment to limit the global temperature increase to two degrees Celsius.

In Brazil, the largest regional polluter, according to CAT an economic recession that the country has been facing since 2014, “has resulted in slower than expected emissions growth, with current policy projections estimated to be well below the 2020 Copenhagen pledge and in line with the NDC targets.”

However, CAT points out that “due to the low ambition of the mitigation targets excluding the land use and forestry sector, emissions in most sectors could still rise until at least 2030, and still meet the NDC targets.”

“Recent developments in energy infrastructure planning and increasing deforestation levels, estimated to have added around 130 MtCO2 to total net emissions in 2016, are evidence of a worsening of Brazil’s national climate policy implementation, going in the opposite direction from what is needed to achieve the Paris Agreement goal,” states the analysis.

In Mexico, the second largest polluter in the region, “currently implemented policies are projected to result in emissions levels above its 2020 and 2030 targets, indicating that Mexico needs to take more action to meet its goals.”

Mexico, which has pledged to reduce its GHG emissions by 22 percent below baseline by 2030, “should consider putting forward a 2025 goal to be consistent with the call by many countries for a five-year cycle of commitments.” 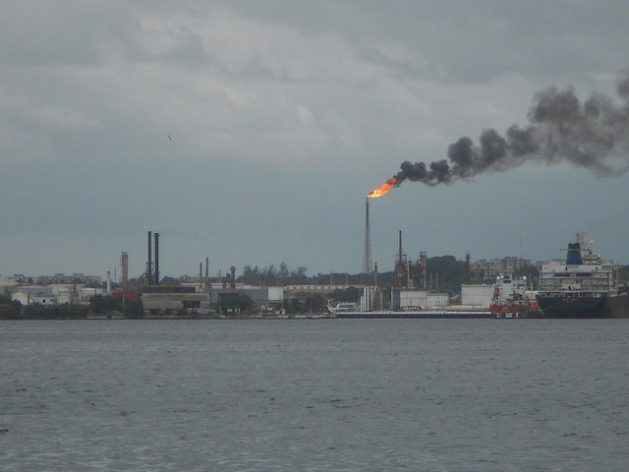 The burning of fossil fuels is the main source of GHG emission in Latin America; view of the Ñico López refinery in Havana. Credit: Emilio Godoy/IPS

The country would achieve that through the unconditioned reduction of its emissions of GHGs and black carbon (BC) – the result of the incomplete combustion of fossil fuels, biofuels, and biomass sources from diesel engines, cook stoves, wood burning and forest fires – combined by 25 percent below business as usual (BAU) in 2030.

Under current policies, emissions from all sectors are projected to grow significantly – by about 50 percent above 2010 levels by 2030.

Argentina’s “unconditional absolute emissions reduction target is 483 million tons by 2030, which is equivalent to a 22 percent increase compared to 2010 levels or 74 percent above 1990 levels,” points out CAT.

The Paris Agreement stipulates that the Transparency Mechanism should provide a clear understanding of climate change measures, including monitoring progress towards the NDCs, with good practices, priorities, needs and challenges.

At the COP21 in Paris, governments agreed that in 2018 they would define the paths to reach the targets of the agreement and encourage each country to raise its commitments in its NDCs.

During the COP23 in Bonn, from Nov. 6 to 17, the nations will continue with this pursuit.

For Carlos Rittl, executive secretary of the Climate Observatory, a network of 37 Brazilian environmental organisations, there is a risk that Brazil will not meet the targets.

“The signals are not good with regard to Brazil moving towards a low-carbon economy, and meeting its goals. It has had many setbacks that cast doubt on the government’s intention to fulfill the commitments,” he told IPS.

The region contributes five percent of the planet’s GHGs, according to data from UN Environment, the agency responsible for implementing the UNFCCC. But it warns that the burning of fossil fuels and emissions from the cement industry will increase that percentage.

For Sean Gilbert, with the World Resources Institute, there is a lack of clarity on how governments will achieve the goals.

“There are no gradual targets. There is a lack of specificity and routes to the goals,” Gilbert, who is also Head of Outreach and Membership, Country Engagement NDC Partnership, which brings together governments and institutions, told IPS.

The Inter-American Dialogue’s Viscidi said: “Some countries will not achieve their goals, which are not even enough, more needs to be done. To avoid climate change, we cannot continue using oil for 100 years, it has to stop. Some countries are developing long-term strategies. But there is not enough money.”

With its 2026 Energy Expansion Plan, Brazil aims by that year for 48 percent of its energy mix to come from renewable sources, excluding hydroelectricity, while Mexico seeks to generate 25 percent clean energy by 2018, 35 percent by 2024 and 50 percent by 2050.

Argentina set a target of covering eight percent of its electricity demand with renewable sources by the end of 2017, and 20 percent by 2025. Meanwhile, Chile with its Law 20/25, aims to generate 20 percent renewables by 2025.

“There is nothing certain about what we will do after 2020 differently from what Brazil does today, such as GHG inventories or annual emission estimates,” said Rittl.

“We want the energy mix to tend towards a gradual decarbonisation, so that by 2050 it will be 100 percent renewable or highly renewable, with solar and wind energy,” he added.

Gilbert suggests that public and private investment in the countries be made compatible with the NDCs and also “to abandon contradictory policies, such as subsidising fossil fuels.”