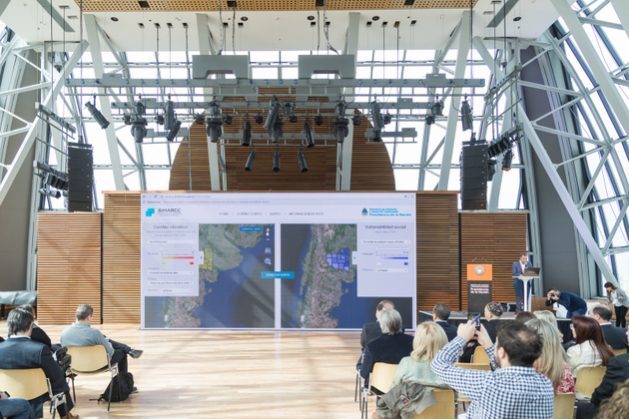 The presentation of the Climate Change Risk Mapping System, which was used as the basis for drawing up the agricultural risk maps in Argentina. Experts say that climate change, in addition to problems, can bring opportunities for the country's agricultural producers. Credit: Secretariat of the Environment

BUENOS AIRES, Feb 25 2019 (IPS) - Climate change poses a global threat to food production, but for agriculture in Argentina it could also present new opportunities. In some areas of the country, farming conditions will improve, according to an analysis by experts of the latest climate projections.

Through the “Maps of risk of water deficit and excess water in crops according to climate change scenarios,” the government projected until 2039 the amount of water available for soybeans, maize, wheat, sunflower and cotton, the main crops, which in most of the country are produced without irrigation.

“Climate change has two faces for agricultural production in our country: it is going to bring us problems but also opportunities,” Agriculture Undersecretary Luis Urriza told IPS.

"When we talk about global warming we all think of an increase in the frequency and intensity of extreme phenomena. But the projections on the maps show many nuances, which for example offer opportunities for production in traditionally dry areas, due to an increase in rainfall." -- Carlos Gentile

“In most of the humid pampas, a vast fertile plain of which there are very few in the world, we expect more rains, in quantity and intensity. There are going to be floods, but if we know how to manage the water we can boost production,” he added.

The negative consequences of climate change are well known in this South American country of 44 million people. In 2018, agriculture was hit hard by a drought that mainly impacted soybean and maize, the most widely-planted crops.

The losses were estimated on the Buenos Aires Grain Exchange at almost six billion dollars, as the harvest was lower than expected by 27 million tons.

In a country where agricultural production is the main generator of exports, the drought was considered one of the factors that contributed to the poor economic performance in 2018, with a 2.3 percent drop in GDP.

But behind this widely publicised news there are also positive data associated with climate change, said Miguel Ángel Taboada, director of the National Institute of Agricultural Technology (INTA), a leader in its field in Latin America.

“The negative impact is very visible, but it must also be taken into account that the heavier summer rains seen in central Argentina have allowed agriculture to move westward into areas not previously considered productive,” Taboada told IPS.

“Let’s just say climate change didn’t necessarily hurt us. The result is rather balanced,” he said.

The new agricultural risk maps were presented Jan. 29 by the secretaries of the environment, Sergio Bergman, and agroindustry, Luis Etchevehere, and will be updated periodically over the next 20 years.

Two different scenarios are outlined. In one, internationally known as RCP 4.5, the level of greenhouse gas emissions peak around mid century then decline and finally stabilise at half of the 2000 levels. In the other, known as RCP 8.5, emissions continue to increase rapidly through the early and mid parts of the century. 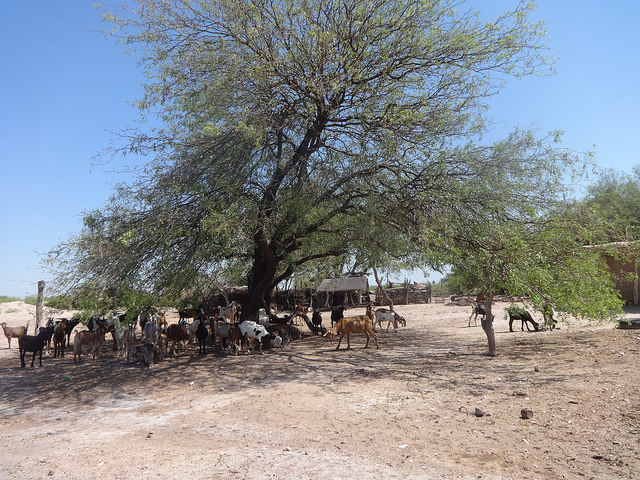 A small goat farm in the province of Santiago del Estero, in northern Argentina, where families raise goats and sheep because of droughts, which have become more intense and prolonged due to climate change, with the subsequent degradation of the soil. Fabiana Frayssinet/IPS

Basically, rainfall is expected to increase or decrease, depending on the area of the country and the seasons of the year. The information provided is to help farmers to more effectively plan their planting dates, the length of the season for each crop and even the choice of seeds.

The risk maps were developed on the basis of a study that the environment ministry made public in 2017: the Climate Change Risk Mapping System, which identifies how each region of the country is going to be affected.

Carlos Gentile, the secretary of climate change and sustainable development, told IPS that “it is a question of enabling adaptation to climate change in order to boost its positive effects and cushion the negative ones, which makes more economic sense than compensating the losses.”

In this regard, the official mentioned the importance of technology and, specifically, the possibility of developing seeds more resistant to climate phenomena.

Over the past 20 years, agriculture in Argentina has made a decisive shift towards genetically modified soybeans, maize and cotton, which are resistant to herbicides or drought.

The release of transgenic wheat, which has already been approved by the environmental and health authorities, is currently being discussed within the government, but it faces unknowns from a commercial point of view, since it is not legal anywhere in the world at the moment.

“When we talk about global warming we all think of an increase in the frequency and intensity of extreme phenomena. But the projections on the maps show many nuances, which for example offer opportunities for production in traditionally dry areas, due to an increase in rainfall,” Gentile added. 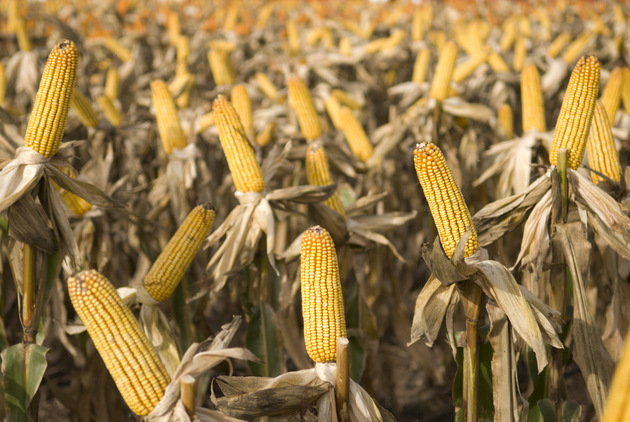 A maize plantation in the pampas, Argentina’s productive zone par excellence. Maize the second crop, after soybeans, in terms of area sown and both are almost entirely transgenic. Credit: Secretariat of Agroindustry

The authorities and experts consulted, including the undersecretary of agriculture, agreed that family farmers are the least prepared to deal with the consequences of climate change and that the State should give them tools, which so far has not been done, because of the decisive role they play in domestic food security.

In geographic terms, the picture, however, seems more complex for areas that are considered agriculturally marginal, both in the south and in the north of the country.

In the southern ecoregion of Patagonia, for example, where the main activity is sheep farming, droughts have affected the quality of the pastureland since 2007.

“We still don’t know if the droughts are due to the effects of climate change. To affirm this we would have to examine a much longer period. But we do know that rising temperatures mean that pastures require more and more water,” Guillermo García Martínez, a natural resources researcher at the INTA station in Esquel, in the Patagonian province of Chubut, told IPS.

At the other end of the country, in the so-called Puna, the Andean plateau that borders Bolivia and Chile, life for those who depend on natural resources will not be easy over the coming years either, because it is a highly fragile ecosystem due to the scarcity of water, where peasant and indigenous families raise llamas and sheep extensively.

“A rise in temperature is predicted in the region, and that means more drought,” explained Alejandro Maggi, a specialist in soil management and conservation at the University of Buenos Aires.

“The retreat of the glaciers, which is already happening, will also have a negative impact, because the water in the region depends largely on them,” he told IPS.

And if what climate change brings are extreme and unexpected phenomena, floods have occurred in Argentina’s Puna this southern hemisphere summer, as in other desert areas around the globe.

“There were landslides and strong soil degradation, because those lands are not prepared to receive so much water,” Maggi said.

It is agribusiness that seems best prepared to face the challenges of climate change.

Doctor of Agricultural Sciences Gustavo Maddonni said that “Argentine producers have always been quick to make decisions to adapt to changes, for example by diversifying planting dates or adopting hybrid crops.”

“The productivity of Argentine agriculture grew steadily over the years, thanks to technology and genetic improvement. As long as they continue to experiment with good management practices, that trend will continue and climate change will be beaten,” he told IPS optimistically.