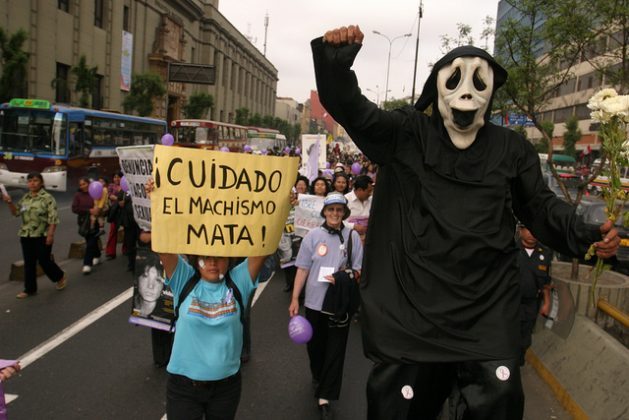 "Beware: machismo kills", reads a sign in one of the demonstrations against femicides and all kinds of violence against women, a number of which were held in Lima and other Latin American cities in 2018. But growing public outrage did nothing to prevent 11 murders of women in Peru in January alone because of their gender. Credit: Mariela Jara/IPS

LIMA, Feb 4 2019 (IPS) - Peru began the year with 11 femicides in January, despite progress made in laws and statutes and mass demonstrations against gender-based violence. This situation is also seen in other Latin American countries, raising the need to delve deeper into the causes of the phenomenon.

Gladys Acosta, one of the 23 members of the Committee of Experts that monitors compliance with the Convention on the Elimination of All Forms of Discrimination against Women (CEDAW), expressed concern about the mediatisation of violence against women and the role this plays in fomenting it.

“The news is broadcast as if it were a show, without explaining things. Violent images are shown and you would think that this could curb the phenomenon by exposing such a destructive attitude, but this is not the case. That makes me think that many people see the aggressor as a patriarchal hero,” the Peruvian lawyer said in an interview with IPS.

In certain mentalities, she argued, “that translates as: how brave he is, I’d like to do that, but I can’t.”

“There is a very strong deterioration of values, and disrespect for the integrity of women, for their bodies, for who we are,” said Acosta, who has been an activist for years in the defence of women’s rights in the region, and who now mainly lives in New York.

In her view, Latin America “suffers from a broader violence that feeds the more specific violence against women,” such as the urgent challenges of daily survival, growing numbers of small firearms that feeds “the notion that problems are resolved through action rather than dialogue,” and transnational crime that, just as it has trivialised politics, has also become part of social life.

“This contributes to turning relationships between women and men into mere power struggles, rather than affection-based relationships: If you don’t do what I want, you’re going to suffer the consequences,” she said.

In November, the Gender Equality Observatory of the Economic Commission for Latin America and the Caribbean (ECLAC) released its latest report on femicides in the region, which states that at least 2,795 women were murdered because of their gender in 23 countries in the region in 2017. Peruvian lawyer Gladys Acosta, one of the 23 experts on the Committee that monitors compliance with the Convention on the Elimination of All Forms of Discrimination against Women (CEDAW), speaks with IPS during an interview at her home in Lima, during a break from her activities in New York. Credit: Mariela Jara/IPS

This lethal violence is not waning and in the first month of 2019 citizen and feminist collectives like #NiUnaMenos reported the escalation of femicides in Argentina, Brazil, Mexico and Chile, among other countries.

This is happening despite the existence of laws on prevention, attention and punishment of gender-based violence at the national level, and the Inter-American Convention of Belem do Pará, to prevent, punish and eradicate violence against women, which since 1994 has provided the region with a single framework for combating the scourge.

Since 2017, Argentina, Peru, Mexico and other countries have also seen the emergence of a new and growing movement to raise social awareness of male violence and femicides, which has been expressed in mass demonstrations under the slogan #NiUnaMenos (Not One Woman Less) or #NiUnaMás (Not One More Woman). Rocío Silva, a university professor and women’s rights activist, stands in front of a poster highlighting #NiUnaMenos, the anti-femicide movement that has emerged in several Latin American countries. Credit: Courtesy of Rocío Silva

Acosta, who was the regional head of the United Nations Development Fund for Women (UNIFEM) between 2008 and 2011, when the institution became UN Women, highlights the importance of laws, treaties and conventions, but recognises that progress at the legislative and judicial levels is not enough.

Creating new concepts of masculinity
Nancy Palomino, who has a master's degree in public health and is co-author of the book "Behind the Mask. Values and sexual violence in everyday life," said men have been dislocated from a system of privileges that favored them, not only by women's movements but by gender advances in society.
“For many, violence is the means to impose their power on women and the family. In femicides we see that they risk losing everything, even their freedom and sometimes their own lives," the Peruvian researcher told IPS.
Palomino said it was important and necessary to work with men and boys on the deconstruction of masculinity and the prevention of violence.
"The school curriculum should be rethought, teachers should be sensitised and the gender perspective and the prevention of violence should be incorporated in schools,” she added.
She also mentioned the challenge of working in the field of male emotions in order to make them more empathetic and capable of becoming a key element to contribute to a culture based on human rights and free of violence.
"This is fundamental in view of the fact that the education of boys and their socialisation focuses on controlling everything that may make them appear weak, affectionate, caring; and on stimulating precisely expressions of strength, domination and violence," Palomino concluded.

“Education, work and opportunities in life are needed to create a favourable context for changing the current pattern of violence against women. Unfortunately, dangerously retrograde political currents are growing in countries in the region that are against education on sexuality or gender issues in schools,” she warned.

The CEDAW expert proposed “rebuilding ties, humane education accessible to all people, in which girls and boys have notions of respect for gender relations”, which includes diverse sexual orientations, and dialogue to solve problems.

“When they grow up, they will be able to generate a form of social life that is not based on power struggles, as men do now with women,” she said.

And she highlighted the need for the media to redefine their information policies in relation to gender-based violence. “The magnitude of the problem that we face affects both women and men,” she remarked, and it is up to the media to take responsibility to overcome their short-term focus on sales and contribute to broader reflection in society.

Peruvian lawyer Rocío Silva, a university professor and human rights activist, told IPS that laws and statutes do not necessarily change reality and that “although progress has been made in terms of rights, it has failed to curb violence against women.”

“There is a powerful cultural component, a patriarchal common sense of men’s possession of women’s bodies. And it is important to work with them, without neglecting the victim. Otherwise, this violence is not going to stop,” she said.

Peru is a prime illustration of a situation that is widespread in the region. In this country of 32 million people, 149 femicides were documented last year according to the Ministry of Women and Vulnerable Populations, which included the rapes and murders of girls at the hands of their fathers.

Faced with this outlook and the inadequacy of legal frameworks, Silva stressed that it is urgent to debate sexism and “machismo” among society and change the way masculinities are constructed.

“All rapes are about power and not extreme sexuality. It is incredible that a basic taboo of human societies such as incest no longer works. There is no awareness of the harm caused by rape, and that is due to sexist and pornographic education,” she said.

She added that another brutal element of masculinity in Peru is hypersexualisation, as if exercising masculinity only meant having sex. “We are in a society and in a sick patriarchy in which limits are no longer possible, with masculinity in a crisis of tremendous violence,” Silva said.

She deplored the fact that the State’s policies do not include men and suggested education, especially of boys.

“It’s about teaching a kind of camaraderie between men and women so that they can see us as equals. You have to teach that problems are solved through words and not through blows,” Silva said.