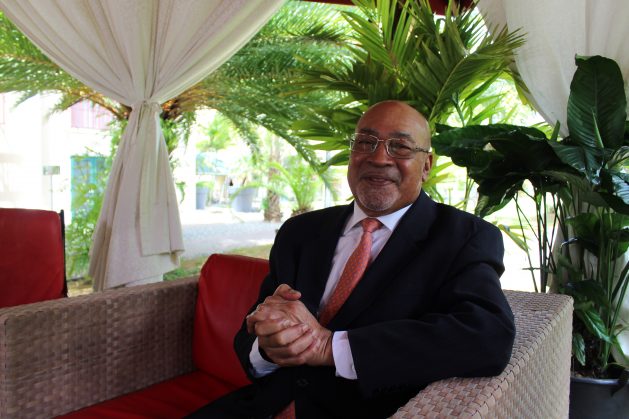 PARAMARIBO, Feb 15 2019 (IPS) - At the Bonn Climate Conference in 2017, Suriname announced its aspirations to maintain its forest coverage at 93 percent of the land area.

For Suriname and other High Forest Cover and Low Deforestation (HFLD) nations, maintaining forest coverage is their contribution to saving the planet from the effects of climate change, something they did not cause.

But HFLD nations have faced a challenge finding a development model that balances their national interests while continuing to deliver eco-services to the world. They say the valuable contribution of especially HFLD developing countries to the climate change challenge is not reflected in climate finance.

These countries – which also include, among others: Panama, Colombia, the Democratic Republic of Congo, Peru, Belize, Gabon, Guyana, Bhutan, Zambia, and French Guiana – now have a champion at the forefront of their cause.

He is Suriname’s President, Desiré Delano Bouterse, who this week gathered the HFLD nations in Paramaribo for a major conference to discuss the way forward.

“The declaration is one of significance,” Bouterse told IPS in an interview.

“What I want to communicate to the world community is that we should first and foremost note that our planet is in danger and that it calls for common action.”

Bouterse said HFLD developing countries have set themselves on a new path, and that Suriname takes its new assignment very seriously and pledges its dedication.

Inter Press Service (IPS): Mr. President, what was your vision when this conference was being conceptualised?

Desiré Delano Bouters (DDB): It’s more than 30 years that we are facing this issue, and what we have looked at is that countries that are facing the issue of high forestry have difficulties getting financial opportunities. So that is basically the main reason for the conference.

What we know is that there is a contention between the interest and will to maintain the forest cover, on the one hand. On the other hand are the development challenges with scarce financial resources. Thirdly is the difficult to access financial opportunities. So, what has to happen is that the world community has to understand this commitment and seek a mechanism for easier accessibility to financial mechanisms so that we can therefore get training, we can get capacity building – access to finances in order to maintain this commitment. So, it’s crucial to get that access.

IPS: We have seen so many declarations made before, is there a reason to be optimistic about the Krutu of Paramaribo Joint Declaration on HFLD Climate Finance Mobilisation?

DDB: Yes, there have been declarations but here’s what I think is necessary coming out of this process. There is a need for precise scientific research which will allow us a truthful picture of what we can be given for the offer we make; so that there is a very precise calculation so to speak, so that we don’t estimate but rather know what the value is of the offer we have made.

IPS: What does this declaration mean in terms of financial resources and also benefits to the people of Suriname and other HFLD nations?

DDB: Firstly, the declaration is one of significance, such that we have gathered as like-minded countries to basically face the coming challenges together and therefore approach the world community with one voice in order to overcome the hurdle that we commonly face. And so you should see the declaration in that sense, that we have brought the many heads of countries with similarities together to get mileage out of what we offer.

IPS: You have been charged with championing this cause on behalf of the HFLD nations – You are speaking directly to the international community, what message are you sending right now?

DDB: What I want to communicate to the world community is that we should first and foremost note that our planet is in danger and that it calls for common action. If we neglect coming together to address this danger, we may face a very tragic situation which will then leave our planet worse than we have met it for our children and their children.

IPS: Now that you have adopted the Krutu of Paramaribo Joint Declaration, what is the next step?

You should see it as this, politically and economically, being in the Caribbean and South America, we should approach it from a common and joint position. Let me give an example. When you look at CARICOM, even if it’s the United States, CARICOM works together as one. It’s the same when it comes to China, Canada, India or even Europe. Why? Because we’re joined together. We have a common strategy. So, when you’re alone, it’s very difficult. But when you have your structure, they will take you more seriously. That’s why I give the example of CARICOM. There are different, small nations but the big countries – if it’s Russia or India – everybody wants to talk with the 14 CARICOM countries.

IPS: Is there a role for the youth in all of this?

DDB: Yes, we have in our portfolio in CARICOM, the inclusion of the youth, this is something we are proud of. What we have seen here today is that young people have stepped up to the plate and they have made their voices heard. However, I’m also of the belief that we should make the space and give them the opportunity to assume leadership so that they can learn and make errors, but at the same time don’t make the same mistake that we as leaders have made; because before you know it, it’s their turn to be leaders. It is therefore important to allow them that experience so that they can be part of the process.