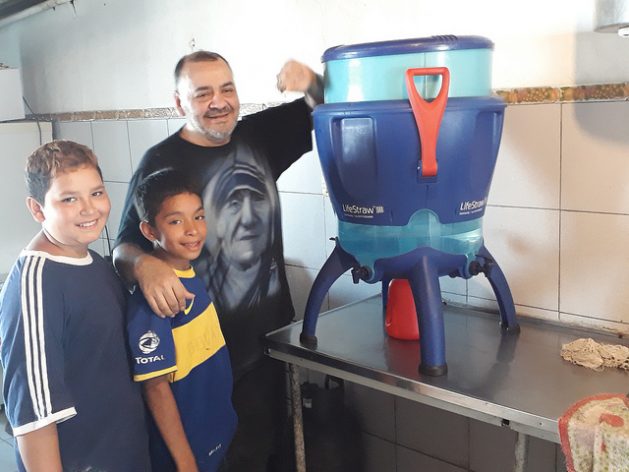 Julio Esquivel and two children in the La Casita de La Virgen soup kitchen in Villa La Cava stand next to the filter that removes 99.9 percent of bacteria, viruses and parasites, with a capacity of up to 12 liters per hour. The purifier became the starting point for raising awareness in this shantytown on the outskirts of the Argentine capital about access to water as a human right. Credit: Daniel Gutman/IPS

BUENOS AIRES, Mar 11 2019 (IPS) - “Look at this water. Would you drink it?” asks José Pablo Zubieta, as he shows a glass he has just filled from a faucet, where yellow and brown sediment float, in his home in Villa La Cava, a shantytown on the outskirts of Argentina’s capital.

In La Cava, as in all of Argentina’s slums and shantytowns – known here as “villas” – the connections to the water grid are illegal or informal, and it is very common for homes to be left without service. And when the water does flow, it is generally contaminated.

“If we have money, we buy 20-litre jerry cans for drinking and cooking. If we don’t have enough money, we drink the water we have, although there are entire weeks in which it comes out yellow. I’ve already been intoxicated several times,” Zubieta’s wife, Marcela Mansilla, told IPS, with the resignation of someone who has lived with the same situation for as long as she can remember.

"The water here comes out with sand and dirt, and it stinks. It's been like this for years and that's why it's common to see kids with pimples, gastroenteritis, diarrhea or worse. In recent years we have had more than 10 cases of tuberculosis and outbreaks of hepatitis." -- Julio Esquivel

At the door of the bare brick house where the couple and their four children live there are some old rusty artifacts, which they picked up in their work as “cartoneros”.

This is the term used in Argentina, for garbage pickers – people excluded from the labour market who every night drag their carts through the streets of the cities and scavenge in search of recyclable materials or other objects that may have some commercial value.

A few meters from where the Zubieta family lives, a community soup kitchen has been operating for 25 years in a single-storey building painted white, where 120 children from La Cava are fed every day and which also functions as a recreational center, with activities aimed at keeping them off the streets.

It is called La Casita de la Virgen and in November 2016, a large blue and red plastic device was installed there, which quickly became very important in the lives of the local residents.

It is a microbiological water purifier designed by a Swiss company that can filter up to 12 litres per hour of contaminated water, eliminating 99.9 percent of bacteria, viruses and parasites.

The equipment, which does not use electricity or batteries and has been distributed in humanitarian crises in different parts of the world, was installed by the Safe Water Project, a social enterprise founded in Buenos Aires in 2015, which promotes immediate and replicable solutions to the problem of access to water.

The residents of La Cava also participate in activities promoted by the company, in which they talk about and discuss their experiences and needs in terms of water, learn about its cycles, and acquire healthy habits to prevent illnesses due to misuse, all of which strengthens their access to water as a human right. 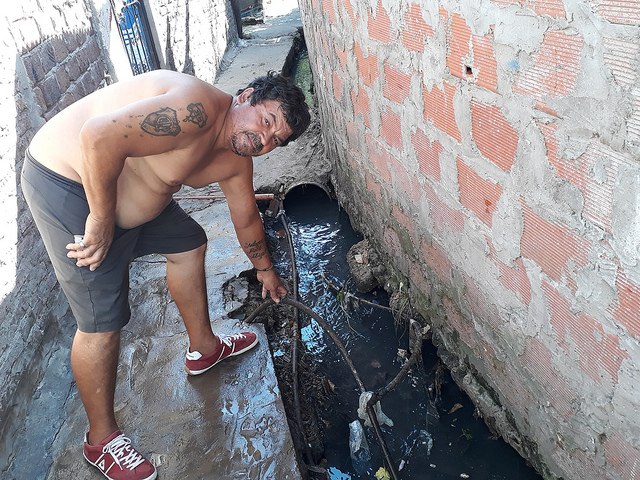 José Pablo Zubieta shows one of the hoses with which the different houses of Villa La Cava make their informal connections to the grid to get water. The service is available a few hours a day but provides contaminated water to this shantytown of 10,000 people north of the Argentine capital. Credit: Daniel Gutman/IPS

The purifier helps ensure clean water to the children who eat in the soup kitchen, who often bring empty bottles or jugs, so they can take home clean water.

The Safe Water Project, which is financed with contributions from companies, state agencies and civil society organisations, is actives in 21 of the country’s 23 provinces and in Uruguay.

Through this collaborative formula, 2,000 families and more than 800 schools and community centres now have access to safe drinking water, reaching around 100,000 people.

“The water here comes out with sand and dirt, and it stinks,” Julio Esquivel, founder and head of the Casita de la Virgen, told IPS. “It’s been like this for years and that’s why it’s common to see kids with pimples, gastroenteritis, diarrhea or worse. In recent years we have had more than 10 cases of tuberculosis and outbreaks of hepatitis.”

“Contaminated water influences health. I’m not a doctor, but it’s easy to see,” adds Esquivel. He is wearing a T-shirt with the image of Mother Teresa of Calcutta, in whose projects to assist the needy he has worked in different cities around the world. 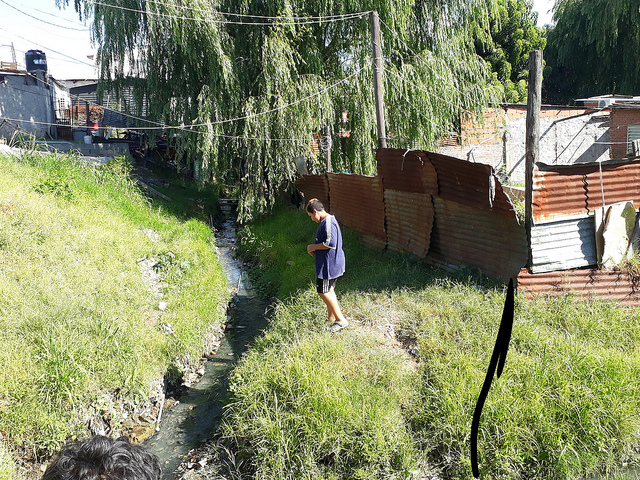 A boy looks at a makeshift drainage channel that runs through Villa La Cava, a slum located in the north of Greater Buenos Aires, in San Isidro, a municipality that blends extreme poverty with luxurious mansions home to some of Argentina’s wealthiest families. Credit: Daniel Gutman/IPS

Esquivel is what is known in Catholicism as a consecrated layman: he took a vow of poverty and solidarity with the poor and today lives in a small house in La Cava, the same place where he was born 53 years ago.

“Before they brought us the filter, I tried to boil the water, despite the high cost of the cooking gas, or to add a few drops of bleach to purify it. The filter was a big change for us,” he said.

La Cava is located in San Isidro, one of the 24 municipalities making up Greater Buenos Aires, which has a population of around 14 million people, over one-third of the country’s population.

In the poor suburbs surrounding Buenos Aires, Argentina’s most complex and unequal area, there are 419,401 families living in 1,134 slums, according to official data from 2016. This number marks a phenomenal growth in 15 years: there were 385 villas in 2001, the year of an economic collapse that left hundreds of thousands of people out of work.

A visitor to La Cava, home to more than 10,000 people on some 18 hectares, gets a quick x-ray of Argentina’s social reality: to get to the villa you must first cross tree-lined avenues flanked by walls that protect large mansions, where some of the richest families in Argentina live.

They of course have access to clean piped water, just like in the neighborhoods of Buenos Aires proper.

In La Cava, however, local resident Ramona Navarro told IPS that “people got used to washing clothes and dishes at night, because during the day the water almost never runs.” 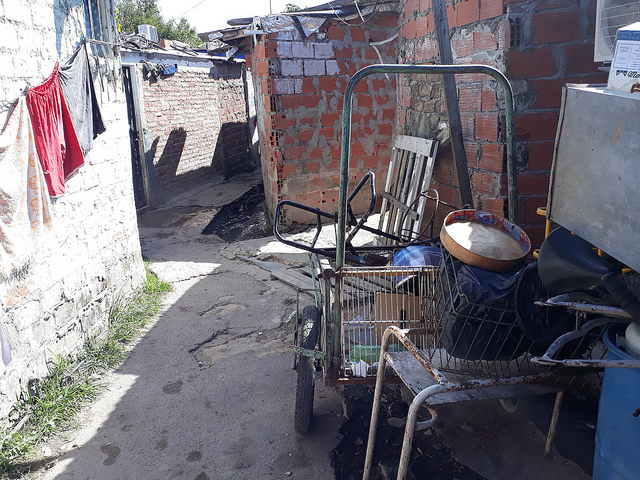 Outside a house are seen a cart and some of the odd objects found by garbage pickers, the informal work on which many of the people of La Cava, a shantytown on the north side of Buenos Aires, depend. Credit: Daniel Gutman/IPS

She and her neighbour María Elena Arispe said that on the hottest days of this southern hemisphere summer, in response to people’s protests, the government of the Municipality of San Isidro sent several trucks one afternoon, which distributed two jerry cans of water to each house – barely a bandaid solution for a situation that is as serious as it is chronic.

The trucks can only drive down the main streets of La Cava, which is full of narrow passageways where children and skinny dogs play in the mud that is formed by the un-channeled drains from the houses.

The lack of clean water and sanitation is a reality that plagues every villa in the country.

In fact, in January, after residents of Villa 21 in Buenos Aires complained about the stench, professionals from the faculty of Community Engineering at the University of Buenos Aires found bacteriological contamination in the water and warned about serious health risks.

That is what motivated Nicolás Wertheimer, a young doctor, to create the Safe Water Project.

“I started working at a hospital in Greater Buenos Aires and when I saw that diarrhea caused by contaminated water was one of the main causes of death among children under five, I wanted to do something,” Wertheimer told IPS.

According to official data, 84 percent of the population of Argentina has access to piped water, but that is no guarantee that the resource is reliable.

“The homes in the shantytowns have the service thanks to informal connections, which generate interruptions in the flow of the network and then often contaminate it,” Wertheimer said.

“In the city of Buenos Aires, the majority of society does not recognise the lack of access to drinking water as a problem. But anyone who has worked in the area of health knows that it is a very serious problem,” said the doctor.