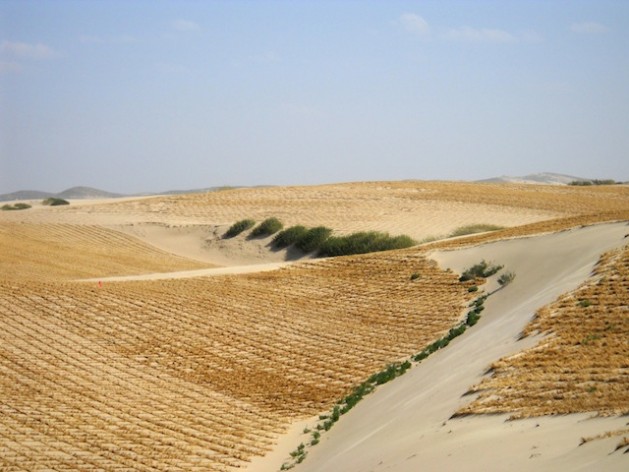 Reclamation of desertified, sandified land on either side of the Sudu desert road in Wengniute County, China. Credit: Manipadma Jena/IPS

ROME, Apr 18 2019 (IPS) - As China has moved from a poor isolated country to a major player in the world economic and political sphere, developing countries need to learn how to engage.

In the first of this two part article I explored how best developing countries could benefit from the ongoing and planned flow of investments into their countries.

In this second part I look at some of the critical elements of China’s development experience and discuss what lessons could be drawn for policies and programmes in other developing countries. Given my background and experience I shall look at this issue from the perspective of agriculture and rural development, although the key ideas most likely also apply to other sectors.

Overall growth in China over the past 25 years has years has averaged 9% per year!!  This is while many other developing countries have struggled to keep growth above population increases.

The key to this fast economic growth is China’s amazingly high investment rate – over 40% in the past two and a half decades.  In comparison, most other developing countries struggle to reach investment rates of 15%.

Much of the investment and the associated growth occurred in manufacturing and associated services which is what make the country the workshop of the world.

However, it is important to recall that one of the key factors underpinnings China’ performance was strong agricultural performance with growth of around 4-5%. – this rate of growth in the agriculture sector is now a benchmark rate for other developing countries who wish to achieve rapid economic development.

It is important to recall that one of the key factors underpinnings China’ performance was strong agricultural performance with growth of around 4-5%. - this rate of growth in the agriculture sector is now a benchmark rate for other developing countries who wish to achieve rapid economic development

This relatively high growth had two consequences. Firstly, it helped maintain low prices, particularly for food and agricultural raw materials, and secondly, it allowed a massive release of labour from agriculture.

The proportion of total labour employed in agriculture in China dropped from around well over 50% in 1991 to around 16% in 2018, a transformation that only a few other countries in the world, such as Thailand and VietNam even come close to.

The low prices of food and agricultural raw materials, along with the transfer of labour out of agriculture, provided the cheap manpower and inputs that laid the foundation for China’s competitive growth in manufacturing and services.

China’s agriculture growth reflects higher yields and productivity improvements, rather than an increase in inputs.  Productivity increases took place along the full value chain, from postharvest handing to processing, packaging and marketing.

This was the result of investments in machinery, equipment, irrigation, storage and logistics, as well as a strong push on research and technology diffusion.   There were also changes in the structure of production which reflect changes in demand patterns particularly of richer, more urbanised consumers.

Output of traditional cereals such as wheat and rice fell, while that of fruits, vegetables, livestock products and fisheries increased rapidly.    China also integrated well with the world trading system, importing crops which were cheaper on the world market such as soyabean, needed for the rapidly expanding livestock sector; and cotton, needed for the textile industry.

Several factors stand out from China’s experience that are of importance to other developing countries. The most important of these are: high levels of public investments in key infrastructure, which eased and facilitated private investments; a strong push for technological change and innovation; and a dynamic approach to institutional reforms and critical policy issues such as liberalization of trade and markets. However, other developing countries may find that implementing these lessons will not be easy and will require substantial changes in their governments do business.

Developing countries need to raise investment rates, including in agriculture. However, low saving rates and poor taxation capacity limit the extent that this can be done. The funds needed to make transformative change will have to come from foreign sources and the only country that can do this at the scale required is China.

The saving’s rate in China is around 50% of GDP and continues to outpace investment providing huge resources to invest overseas. Ensuring that developing countries attract, and then make the best use of Chinese investments is thus critical. This is a topic I dealt with in my preceding paper.

At the same time, Governments in developing countries need to make far better use of the limited available public funds. In a number of countries, public funds from Government or donors are not spent in a timely manner due to bureaucratic and administrative inefficiencies.

When they are spent, much goes into corruption; on appeasing political constituencies particularly by providing low-skill, unproductive jobs; or funding activities that are best left to the private sector.  Developing countries also need to spend much more on research and technological innovation.

Actions to improve public spending, including larger allocations to research and technological innovations, require a mix of administrative and political actions which are the capacities of Governments of developing countries to implement if they so wish.

However, getting the right mix of policies especially with regard to broad development visions and strategies is more complex. In the unipolar world which emerged after the fall of the USSR, neo-liberalism provided the dominant development paradigm. The success of China, and countries such as Viet Nam, are providing an alternative to this neoliberal paradigm where the role of the state is stronger, and markets are used to guide local decisions but with strategic directions and key economic levers in the hands of the Government.

Most western academic institutions, traditional donor agencies and international UN agencies aligned themselves with the neoliberal view.  However, developing countries faced with a successful and emergent China need to think harder about their development strategies and policies.

This will require them to work closely not just with traditional donors and UN agencies but increasingly with academia, civil society and research institutions, at home as well as in China. As mentioned in the first of these two articles, this is something that developing country governments need to still need to learn how to do.