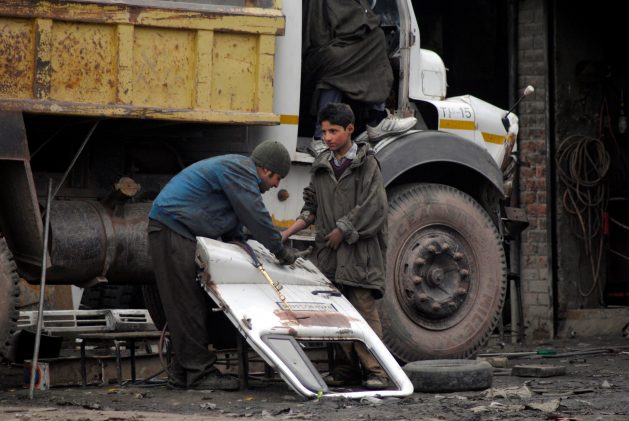 A 2009 study found that almost 250,000 children worked in auto repair stores, brick klins, as domestic labourers, and as carpet weavers and sozni embroiderers in Jammu and Kashmir. Credit: Umer Asif/IPS

SRINAGAR, India-administered Jammu and Kashmir, May 9 2019 (IPS) - Mubeen Ahmad was nine years old when his mother sold him into service to a mechanic for the petty sum of few thousand Indian rupees. His mother had found it hard to support the family after his father, a labourer, was killed during one of the anti-India protests in Jammu and Kashmir in 2008.

So Ahmad learnt how to repair deflated tyres and erratic car engines instead of attending school. “I was made to work amid the freezing cold during winters and there was no one to whom I could have narrated my ordeal,” the 20-year-old, who now owns a shop in Srinagar, the state’s capital, tells IPS.

Rights activist Aijaz Mir tells IPS that children like Ahmad can be found on almost every street in Kashmir as a majority of homes here have lost their sole bread winners because of the ongoing conflict in the region.

Jammu and Kashmir, a northern Indian state known for its picturesque tourist resorts and majestic mountains, has long been embroiled in a violent secessionist movement.
The seven-decade dispute over Kashmir has become a humanitarian nightmare. It is the cause of wars and conflicts between nuclear rivals Pakistan and India, and remains the reason for an ongoing armed rebellion against New Delhi’s rule.

The Kashmir dispute is the oldest unresolved disagreement on the United Nation’s agenda.
Over the last 30 years, an estimated 100,000 people—including civilians, militants, and army personnel— have died in the region as the armed struggle for freedom from Indian rule continues.

“Nobody talks about this dark and dreadful side of the conflict which is consuming our children in hordes. We have found that the families of the victims too don’t want to send them to school because there is no one who could earn at their dwellings,” Mir tells IPS.

In 2018 alone there were 614 incidents of violence in the state, resulting in the deaths of 257 militants, 91 security forces and 38 civilians.

Both India and Pakistan have gone to war over the territory twice, in 1947 and 1965, and fought a smaller-scale conflict in 1999 and again in February when a Kashmiri militant rammed an explosive-laden vehicle into a convoy of Indian paramilitary forces, killing at least 40 soldiers in the worst attack in the region in three decades.

As recently as Monday, May 6, violence disrupted the ongoing elections as militants hurled grenades at polling stations in the southern part of the state.

Violence and death are a part of life here, but children are the silent sufferers in this bloody conflict.

On the outskirts of Srinagar, 13-year-old Shaista Akhtar is busy weaving designs on a traditional rug. It is 9 am and she will not be stopping her work to leave for school anytime soon.

Five years ago, Akhtar was was studying in grade 3 when her father—a carpenter by profession—was caught up in an attack by Islamist militants. It was the day her life changed.

The grenade that was meant for the army continent had missed its target, landing instead on the road Akhtar’s father was travelling on. He, and two others, died on the scene.

The death of her father is faintly imprinted in her mind and all she remembers of the time are the wails of her mother and two elder sisters.
After his death, her two elder sisters decided to quit their studies and began to work like their mother in order to support the family.

Akhtar was sent to a local weaver who taught her how create the tapestries unique to Kashmir’s colourful, traditional rugs and shawls. Two years later, by the time Akhtar was 10, she had learnt her trade.

“I earn almost INR 3500 [50 dollars] every month. The only satisfaction I derive out of my work is that I help my family to sustain. Otherwise, I yearn to go to the school, study sciences and mathematics along with other kids there,” she tells IPS.

But Akhtar’s story is not unique.
According to government figures, there are over 175,000 children actively involved in child labour in the state, which has a population of 12 million.

Mir says the actual number of child working could be much higher as government figures only reveal the reported cases and a majority of the child labour cases go unreported due to the fear of punishment.

An independent report titled “Socio Economic and Ethical dimensions of Child Labour in Kashmir” conducted in 2005 by Professor Fayaz Ahmad claimed that at the time there were more than 250,000 children in the state working in auto repair shops, brick klins, as domestic labourers, and as carpet weavers and sozni embroiderers.

One of the prime reasons for child labour was poverty, the report stated.

The study also points out that once children start earning money, 80 percent of them stop attending school.

Inam-ul- Haq, 13, is one of those children who had to stop attending school to earn an income. He works as a helper at a roadside eatery in southern Kashmir, earning no more than 1500 INR (21 dollars) a month.

He began working to support his younger brother and bed-ridden, diabetic mother after his father died in the 2016 street protests. More than 90 civilians were killed during the six-month, anti-India protests.

“My mother is diabetic and younger brother a five year old kid. Who could have earned for them if not me?” Haq tells IPS, adding that even if his earnings are meagre, he is content that his family doesn’t starve or go to bed hungry.

In Kashmir, the 1986 Child Labour Act bans the employment of children below the age of 14. But according to Zahid Mushtaq, an editor at the local Srinagar newspaper, it is very rare that culprits are brought to book.

“The reason is simple. Family of the child and the child himself doesn’t testify in the court that he is working anywhere. In most of the cases, the victim is so poverty stricken that officials do not initiate action against the accused as it could cost the child his job,” Mushtaq says.

Mushatq also blames the lack of rehabilitation centres and failed government policies as being among the reasons for the spiralling number of cases of child labour here.  According to Mushatq, victims of violence are eligible for government’s financial assistance but the incredibly slow processing of these cases means that they gather dust as the victims suffer further.

For Akhtar, she knows that studying is the key to a good life. A life where she will be respected.

“I dream of becoming a teacher and teach kids English. As I am not studying at present, my life would remain as it is. There will be nothing good the world would offer to me.”

So instead she prays “that some help may descend from the heavens so that I wouldn’t have to earn and can go to school.”