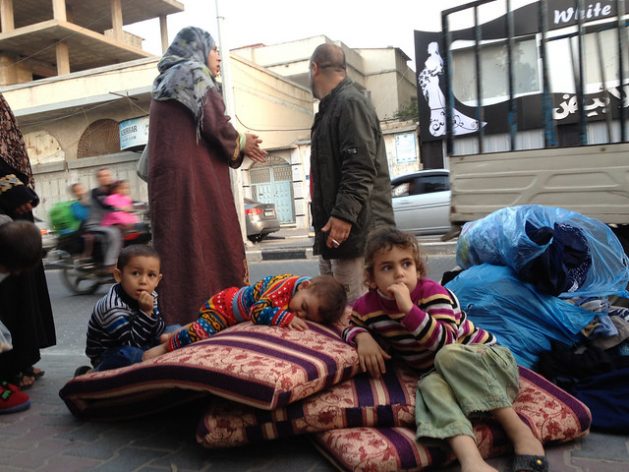 A Palestinian family on the street in Beit Lahia in north Gaza. According to a new Save the Children report, 72 percent of child deaths and injuries across the world’s deadliest conflict zones are caused by landmines, unexploded ordinance, air strikes, and other explosives. Credit: Mohammed Omer/IPS.

UNITED NATIONS, May 17 2019 (IPS) - Too many children are dying as a result of explosive weapons, and the international community must step up to protect and declare children off limits in war.

In a new report, Save the Children documented the devastating toll that armed conflicts have on children psychologically and physically and is urging further resources and political commitment to protect them.

“International law makes clear that everyone has a responsibility to make sure children are protected in war. Yet explosive weapons continue to kill, maim and terrorise thousands of children every year,” said CEO of Save the Children International Helle Thorning-Schmidt.

“We are calling on governments to adhere to the humanitarian laws and norms and human rights provisions that are there to protect children. We have been underestimating the harm done to children by explosive weapons in densely populated urban areas. And attacks that cause disproportionate civilian harm are illegal under international law,” echoed Kevin Watkins, CEO of Save the Children UK.

According to the report, 72 percent of child deaths and injuries across the world’s deadliest conflict zones are caused by landmines, unexploded ordinance, air strikes, and other explosives.

In fact, children are seven times more likely to die from blast injuries than adults involved in fighting.

In Afghanistan, explosive weapons were the cause of death in 84 percent of child conflict fatalities over a two-year period compared to 56 percent of civilian adult deaths.

In Gaza in 2014, all reported child fatalities were the result of explosive weapons.

Children are also 50 percent more likely to be victims of a blast injury after conflicts are over as they are finally able to go outside and play again.

Mahmoud, a 12-year-old from Gaza, was playing in the street when he was hit by an explosive weapon and lost his eye.

“I heard an explosion and I felt something go into my eye. I touched my eye and began to run. I felt blood pouring out,” he told Save the Children.

Not only do such experiences leave an emotional scar, but also injured children are more likely than adults to suffer more complex internal damage as their underdeveloped skulls and muscles offer less protection to the brain and other organs.

For instance, the different make-up of children’s bones and tissue means that amputated limbs must be managed carefully. Bones continues to grow as the child grows, so wounds must be regularly tended and bone shaved down.

“The sad reality is most medics just haven’t been trained to treat children injured by blasts. Nearly all the textbooks and procedures we have are based on research on injured soldiers, who are usually fit adults,” said von Bertele.

“We know children’s bodies are different. They aren’t just small adults….without [highly specialised knowledge], children are left with even worse disabilities, and often intractable pain for life,” he added.

For example, Iraqi 9-year-old Hassouni was severely injured by a car bomb as shrapnel penetrated his skull. One of his hands was paralysed and Hassouni lives in constant pain.

Medical manager of Syrian Relief Dr. Malik Nedam Al Deen echoed similar comments, stating: “For more than eight years we’ve seen children dying on the operating table from wounds that adults have survived. The tragedy is these deaths could have been prevented with basic training.”

Now, PBIP, a coalition of doctors and experts founded by Save the Children, has developed the world’s first guide to help doctors treat and save more children’s lives. It provides child-specific knowledge and treatments geared towards those who have suffered blast injuries.

“In a war zone, you’re mentally prepared for the adults. You expect to treat injured soldiers, and even civilian adults. But the sights and sounds of a young child torn apart by bombs are something else,” said lead author of the manual Paul Reavley.

“Until this manual, there really hasn’t been anything to prepare doctors for dealing with the horror of children injured by blasts. For the first time it tackles psychological, as well as the physical, challenges. It’s not just a guide to practical procedures – it’s a crucial emotional crutch,” he added.

In May, Save the Children’s partner Syria Relief began distributing the manual to emergency units across northwest Syria including Idlib and Aleppo. The guide will later be dispersed to other conflict zones such as Afghanistan and Yemen.

“This manual is designed for anyone with a medical degree and a scalpel. I’m excited this is going to doctors in Syria. It’s a simple solution that will undoubtedly save lives,”said Al Deen, who helped co-author the guide.

Alongside the manual, Save the Children launched a new campaign to #StopTheWarOnChildren and a 10-point charter which was presented at the Hague in the Netherlands to United Nations High Commissioner for Human Rights Michelle Bachelet and Dutch Princess Viktoria.

The charter highlights the need to ensure parties to conflicts adhere to international law and standards, including the suspension of arms sales where there is a risk of killing or injuring children, hold perpetrators to account, and provide children with necessary, practical assistance.

“This manual is a practical step that will save countless lives. But prevention is the best option. Even in war, children have a right to protection,” said Watkins.

“The bottom line is that all governments and armed forces need to stop treating children as though they are adults in miniature. Evidence on blast injury shows they are more vulnerable, and this should be reflected in how those using explosive weapons assess risk – and how agencies responsible for investigating possible war crimes review evidence,” he added.