Spekboom (Portulacaria afra) is a small, succulent tree that is native to the Eastern Cape region of South Africa. It can easily be grown from cuttings, which can survive even in dry conditions (Photos by Tim Christophersen / Florian Fussstetter)

NAIROBI, Jun 17 2019 (IPS) - Land restoration could attract large private investments in the fight against climate change over the coming decades, if Governments and the United Nations put the right incentives and conditions in place.

When the goats on his farm had nothing more to eat, because the soil was eroded and most of the vegetation destroyed, South African farmer Pieter Kruger had to make one of the toughest decisions of his life. “I have always been a farmer,” he says, “but that moment in 2007, I knew that I could not go on. There was no more water. Zandvlakte is the last farm in our valley in the Bavianskloof, and our river had run dry before it reached my farm.” Pieter reluctantly gave up goat farming, and embarked on the Working for Water programme, a government pilot effort to restore degraded watersheds.

Over the next three years, he and a team of over 100 workers planted 1,500 hectares of his farm with millions of cuttings of an indigenous succulent tree, the spekboom (Portulacaria afra) which can grow well even in dry conditions.

“I have never regretted that decision”, says Pieter Kruger, “the trees are now well established, and in the big flood this year, we managed to keep runoff of water to penetrate the soil, improving ground water levels, instead of washing away our topsoil into the river.” 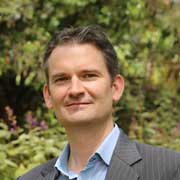 Spekboom forests can act as ‘natural water dams’: in mountainous areas, the trees can grow even on steep slopes, and when rare rainfall occurs in the semi-arid regions of the Eastern Cape, they suck up all the moisture quickly, and can store if for months. Spekboom forests can serve as grazing and browsing areas of last resort for wildlife and livestock, even when all else has withered in a drought.

Sekboom trees also absorb carbon dioxide from the atmosphere faster than most other trees in dry conditions. However, farmers are usually not paid for carbon storage, water security and other essential ecosystem services which well-managed land provides for downstream water users, and for the global community. That could change, however, if Governments and the global community set the right conditions.

“Spekboom is an amazing plant. It can take root and regrow, just from simple cuttings from existing trees. It can quickly reform the soil because it continuously sheds a lot of leaves, which help to build up soil organic carbon”, explains ecologist Anthony Mills, who has published extensively on the sub-tropical thicket ecosystem of South Africa, one of the country’s lesser known plant biomes.

Spekboom is the dominant tree of the thicket ecosystem, a complex forest which creates its own microclimate. Thicket forests used to cover up to 5 million hectares across the dry areas of the Eastern Cape, until about 200 years ago, when massive overgrazing by goats and sheep started, and turned much of this ecosystem into a mere shadow of its former biodiversity and natural splendour.

“You can drive for four hours across degraded areas, which look like a savannah woodland, because all you see are some of the surviving jacket plum trees (Pappea capensis), which were originally part of the thicket ecosystem. The richness of this ecosystem is almost all gone today, but we could bring it back,” says Mills. “Today, more than 1.3 million hectares of severely degraded thicket landscapes in the Eastern Cape Province are ready to be restored to their former ecological functionality, which can also increase their productive use for livestock,” he adds.

Scientists from Stellenbosch University came upon the remarkable ability of spekboom to regrow in degraded areas almost by chance. In 1976, a farmer in the Kromport area of the Eastern Cape had planted cuttings of the sturdy tree on a steep slope of about 200 by 100 metres behind a barn on his farm, because he was trying to find a way to stop annual floods that were threatening his livestock. He soon discovered that not only did spekboom rapidly establish itself in the degraded soil, but it also stopped the floods very quickly after it had been planted. 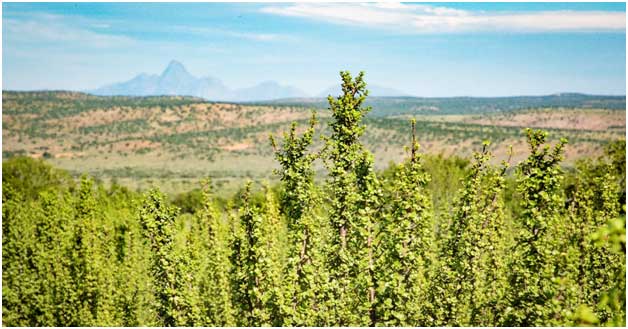 In the foreground, one of the 330 demonstration plots for thicket replanting with spekboom (Portulacaria afra) across Eastern Cape. In the background, the few remaining jacket plum trees (Pappea capensis) on degraded land are an indicator of the former spekboom thicket ecosystem, which could be replanted (Photo by Florian Fussstetter)

“Some of the plants in this area are now over 40 years old, and we can see some of the original thicket ecosystem reforming. Other plants are joining, and birds and wildlife are returning,” says Mills. Although the area is rather small, it has yielded valuable scientific information, including on the amount of carbon stored below ground, in the roots of the spekboom plant and in the soil.

The discovery prompted the South African Government in 2007 to start what is arguably the largest ecological experiment in the world: they planted 330 plots of half a hectare (50 by 50 metres) with spekboom across the entire degraded area, almost 1,000 kilometres. Ten years after the planting, the plots have yielded promising results. In almost all the plots which were planted in degraded thicket and which had their fences maintained, the replanting with cuttings from spekboom has been successful, under a variety of conditions and planting techniques. The most important factor, according to scientists from Stellenbosch University and Nelson Mandela University, is that the grazing pressure from goats must be reduced for at least five years through fencing, and the cuttings need to be planted well and deep enough in the soil.

“By finding a way to boost agricultural productivity, restore a lost ecosystem and store carbon quickly and at scale, we would have a real win-win for farmers and for the global community”, says Tim Christophersen, Coordinator of the Freshwater, Land and Climate Branch at UN Environment.

The goal is to restore an area of thicket of over one million hectares, almost 200 times the size of Manhattan. There is potential to plant more than 2 billion tree cuttings across this immense landscape, providing work and income for thousands of people, for several years.

“This might sound daunting but given the opportunities for combining the real, long-term restoration of these degraded lands with diversified economic benefits to the local economy, the potential is amazing,” says Tim Christophersen.

The South African Government sees thicket restoration as one of the low-hanging fruits for the achievement of national climate and biodiversity goals, and recognizes that private investments are key. “We planted the pilot plots back in 2007 to attract private investors, by demonstrating that this can work,” says Dr. Christo Marais, Chief Director at the Department of Environmental Affairs, which runs the Working for Water programme. “We have studied this thoroughly, and we believe there are big opportunities for ecosystem restoration investments across South Africa.”

One of the next steps in scaling up the restoration could be to establish carbon and livestock farms, where several thousand hectares can be replanted with spekboom, and where income from carbon is combined with other income streams and economic activity.

“Farmers like to look over the fence, and see what their neighbour is doing,” says Pieter Kruger. “Having big demonstration plots on existing farms is important to spread the word that becoming a carbon farmer can pay off, both for restoring the land, and for making a decent return from the land,” he adds.

Even though Pieter has not yet received any compensation for the carbon he has sequestered on his farm, he remains optimistic. “We never give up,” he says. His Zandvlakte farm lies in the Bavianskloof, a UNESCO World Natural Heritage Site, one of the most remote and beautiful areas of South Africa. Pieter and his family have also branched out into eco-tourism, where visitors can experience the success of Pieter’s shift from conventional farming to restoring his land first-hand.

“The global carbon market, including for carbon offsets, for example from the aviation industry, is starting to boom again, after several years of uncertainty. If current trends persist, carbon credits might provide some income for farmers like Pieter,” says Mills. Carbon credits are compensations which nations, companies, or individuals, can buy to offset part of their emissions which cannot be otherwise reduced. Offsets are not a replacement for ambitious climate mitigation action across all sectors. They can only provide a temporary solution while we deeply de-carbonize our economies. Ecosystem carbon credits often also have many other benefits beyond carbon, such as biodiversity, water, or better income options for farmers.

The carbon market is highly complex and volatile, and farmers should not only rely on carbon for their income. “We must try to blend different income streams for farmers, so that carbon credits are only one of several revenue streams. At the same time, the restoration of degraded lands will increase the value of the farmland in the long run and will improve resilience and ecosystem services for local communities, and for entire nations”, says Tim Christophersen. “We are running out of time for climate and biodiversity action, and large-scale opportunities like the thicket restoration in South Africa must be urgently explored. We would like to support the Government of South Africa and other partners, like Living Lands and Commonland, to realize the potential of the Eastern Cape thicket restoration, as we are moving into the UN Decade on Ecosystem Restoration 2021-2030.”