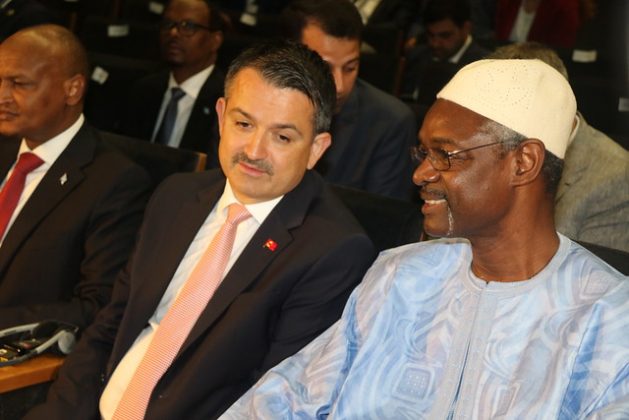 Turkey’s Agriculture and Forestry Minister Bekir Pakdemirli (left) and head of the UNCCD Ibrahim Thaw (right) at the international congress on "Successful Transformation toward Land Degradation Neutrality: Future Perspective" being held Jun. 17 to 19 in Ankara. Thaw told delegates at the conference that increasing food production by 50 percent, when land degradation and climate change will be decreasing crop yields by 50 percent, makes restoring and protecting the fragile layer of land an issue for “anyone who wants to eat, drink or breathe.” Credit: Desmond Brown/IPS

“Think about what it takes to feed 7.5 billion people. Only 20 percent of the planet is habitable, yet within our own lifetimes one out of every four hectares of productive land has become unusable, three out of every four hectares have been altered from their natural state, and while agriculture drives that change, we waste a third of the food,” head of the UNCCD Ibrahim Thiaw told hundreds gathered in Ankara who were attending the international congress on “Successful Transformation toward Land Degradation Neutrality: Future Perspective” being held Jun. 17 to 19.

“We must take action to repay our debt to nature and restore our land, generating a tenfold return on our investment, multiplying the benefits of the Sustainable Development Goals, and growing together in a virtuous cycle where everyone contributes and everyone benefits.”

Thiaw said increasing food production by 50 percent, when land degradation and climate change will be decreasing crop yields by 50 percent, makes restoring and protecting the fragile layer of land an issue for “anyone who wants to eat, drink or breathe.”

World Day to Combat Desertification is celebrated every year in every country on Jun. 17 to promote good land stewardship for the benefit of present and future generations.

Thiaw highlighted that more than a billion people have lifted themselves out of extreme poverty since the UNCCD was formed, but exploitation of natural resources continues to widen the poverty gap instead of reducing it.

And, while women are key to closing that gap, the UNCCD executive director said 90 percent of countries legally restrict their economic activity.

“For example, they make up 40 percent of farm workers, but only one in five own their land and even fewer control it,” Thiaw said.

“Yet, lifting such restrictions would add 240 million jobs and 28 trillion dollars to the economy by 2025. That’s like another U.S. economy – and then some – within just six years.”

Thiaw said this is why the UNCCD Gender Action Plan promotes more participation in decision making; more economic and legal empowerment; and more access to resources, education and technology.

“There is a social tipping point when women’s participation reaches 30 percent, and we need to reach it quickly, to avoid reaching one for land, biodiversity or climate.”

UN secretary-general António Guterres, in a video message at the opening of the congress, noted that the world loses 24 billion tons of fertile soil and dry land degradation reduces national domestic product in developing countries by up to eight percent annually.

Guterres said much remains to be done, and stressed the imperative of combatting desertification as part of our efforts to achieve the Sustainable Development Goals.

Pakdemirli said that in the last 30 years Turkey has increased its forestland by six percent.
Turkey is the world’s number three country when it comes to adding forestland, after China and India. Worldwide, forestland has shrunk over the last 10 years an average of 5.2 million hectares annually, Pakdemirli said.

With its afforestation, erosion control, and rehabilitation efforts over the last 10 years, Turkey is among the world’s leading countries in adding forestland, and these efforts will continue, he said.

As part of efforts to fight desertification and erosion, Turkey carried out 327 projects between 2011 and 2018.

Some 196 countries and the European Union are parties to the UNCCD, of which 169 are affected by desertification, land degradation or drought.

In 2015, the international community agreed to achieve a balance in the rate at which land is degraded and restored by taking concrete actions to avoid, reduce and reverse land degradation, generally referred to as achieving land degradation neutrality or LDN, and mitigate the effects of drought.

In the last four years, 122 countries have committed to take voluntary, measurable actions to arrest land degradation by 2030. And 44 of the 70 countries that have suffered drought in the past have set up national plans to manage drought more effectively in the future.

Whereas a significant amount of the land degradation and transformation has occurred over the last 50 years, Thiaw stressed that the success stories of land restoration and conservation, such as in Turkey’s Central Anatolia region, where rehabilitation and restoration over decades has resulted in increased forest cover, offer hope that change is possible when traditional knowledge, technology and faith communities come together creatively.

He said the restoration of 150 million hectares of farmland by 2030 can generate up to 40 billion dollars in extra income for smallholders, feed another 200 million people and sink several gigatons of carbon dioxide. Scaling it up across all our degraded land could prevent biodiversity and climate from disintegrating and bequeath new opportunities to the next generation, he added.