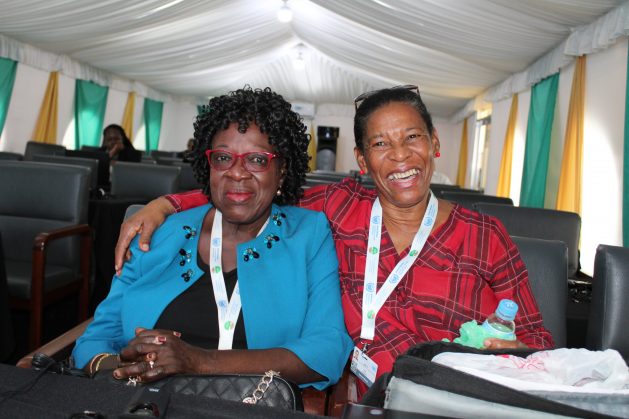 Hazel Halley-Burnett, head of Women Across Differences in Guyana (left); and Ruth Spencer, GEF Focal Point for Antigua and Barbuda, attended the 17th Session of the Committee for the Review of Implementation (CRIC 17) of the United Nations Convention to Combat Desertification (UNCCD) in the Guyana capital Georgetown. Hazel-Burnett and Spencer are two Caribbean champions for gender equality issues. Credit: Desmond Brown/IPS

GEORGETOWN, Jan 31 2019 (IPS) - In parts of the world where the gender gap is already wide, land degradation places women and girls at even greater risk.

Against this background, Dr. Douglas Slater, Assistant Secretary General Human and Social Development at the Caribbean Community (CARICOM) Secretariat, said gender mainstreaming is very important in all aspects of sustainable development for the Caribbean.

“We know in agriculture, that on several occasions our women are very much involved in some of the work and we have to ensure that they continue to be so, but that the resources are placed at their disposal to get them to really be fully engaged,” Slater told IPS.

“I think that at the same time, because we are small countries, technology that is utilised in agriculture has to be looked at for us to be most efficient and we need to see how all genders can get involved.”

He added that more needs to be done to convince young people that agriculture can provide a good livelihood and women are capable and should be involved too.  Slater spoke to IPS at the 17th Session of the Committee for the Review of Implementation (CRIC17) of the UNCCD in Georgetown, Guyana.

“When conducting training at our agricultural institutions, we should expect our women to be operating tractors, be managers of greenhouses. They have demonstrated they can do it, we have to encourage them to do more of it,” Slater said.

Globally, women comprise 43 percent of the agricultural labour force, rising to 70 percent in some countries, and UNCCD has cited the importance of taking gender roles into account when making policies and laws to promote land degradation neutrality.

In Africa, for instance, 80 percent of agricultural production comes from smallholder farmers, who are mostly rural women.

Despite their majority in the smallholder agricultural sector, women typically don’t have secure control over their farmland or over its productive resources, especially commercially marketable produce.

This lack of control is linked to land ownership rights in rural areas, which habitually favour men. Women’s access to the land, meanwhile, is mediated by their relationship to the male owner.

Climate change is a compounding factor in land degradation that increases uncertainty with regard to women’s production, accessibility and utilisation of food, as well as in relation to food systems stability.

The workshop, which was held in St. Lucia, sought to build and strengthen capacity on gender mainstreaming. It also addressed how to refine and finalise a project concept note with the involvement of all key stakeholders prior to seeking financial support from the Green Climate Fund.

A key focus of the project is to build synergies between the on-going activities to the LND initiative, and the workshop was designed to embed gender perspectives in the synergistic implementation of activities in the Caribbean.

UNCCD Executive Secretary Monique Barbut says women are the first to be affected by the main indirect causes of land degradation – population pressure, land tenure, poverty and lack of education

“If you look at all those, generally it’s the women who are the first target of all those things. It is absolutely abnormal. In many countries, women do not have any property rights,” Barbut told IPS.

“So how can you ask a woman who is managing land to manage it well, to think of the future when the land will never be hers? That’s a real question.”

As it relates to education, Barbut said women are usually less educated than men, adding that that is something that also has to be looked at.

She said UNCCD is highlighting all of these issues in its gender plan, while stressing the “for very positive action towards them.”

The UNCCD Executive Secretary also pointed to how LDN interventions can bring positive change to the lives and women and girls.

She cited a planned project in Burkina Faso to transform 3,000 of the country’s 5,000 villages into eco-villages, noting that this will provide solar ovens and also potable water.

“We want to have those women get out of that so that they can go to agroforestry programmes which will on top of everything give them revenue. We will make sure that the revenue that they get will go mainly into education of the children and into health facilities for both children and women in particular.”

“So clearly, there is a direct link between the consequences of land degradation and the wellbeing of women in most countries. It’s not as severe in some countries but in every single country we see how things change when we empower women on the land management,” Barbut added.

The UNCCD says gender equality for rural women should include equal ownership rights to family land since security of tenure could be a catalyst for grassroots land management prioritising land degradation neutrality.

It adds that ensuring equality is also about decreasing the burdens of rural women and enabling them to access vital services and goods.

Land degradation and drought affect more than 169 countries today, with the severest impacts being felt in the poorest rural communities.

Previous estimates projected that by 2025, approximately 1.8 billion people – more than half of them women and children – would be adversely affected by land degradation and desertification. These estimates have already been significantly surpassed, with 2.6 billion affected today.