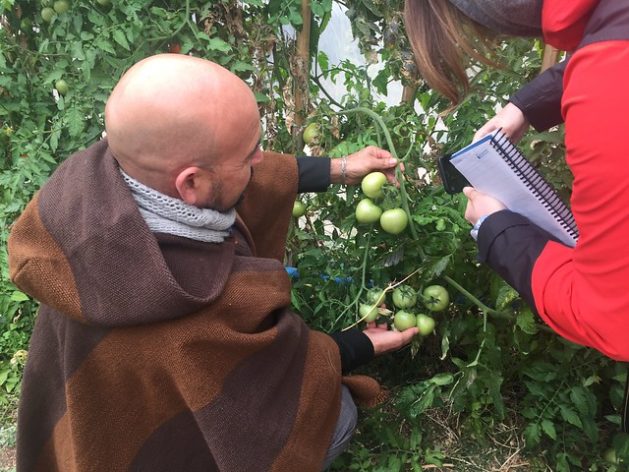 The principal of the Samo Alto rural school, Omar Santander, shows organic tomatoes in the greenhouse built by teachers, students and their families, who raise the crops irrigated with rainwater or recycled water in Coquimbo, a region of northern Chile where rainfall is scarce. Credit: Orlando Milesi/IPS

OVALLE, Chile, Jul 4 2019 (IPS) - Children from the neighboring municipalities of Ovalle and Río Hurtado in northern Chile are harvesting rain and recycling greywater in their schools to irrigate fruit trees and vegetable gardens, in an initiative aimed at combating the shortage of water in this semi-arid region.

And other youngsters who are completing their education at a local polytechnic high school built a filter that will optimise the reuse and harvesting of water.

“The care of water has to start with the children,” Alejandra Rodríguez, who has a son who attends the school in Samo Alto, a rural village on the slopes of the Andes Mountains in Río Hurtado, a small municipality of about 4,000 inhabitants in the Coquimbo region, told IPS.

“My son brought me a tomato he harvested, to use the seeds. For them, the harvest is the prize. He planted his garden next to the house and it was very exciting,” said Maritza Vega, a teacher at the school, which has 77 students ranging in age from four to 15.

The principal of the school, Omar Santander, told IPS during a tour of rural schools in the area involved in the project that “the Hurtado River (which gives the municipality its name) was traditionally generous, but today it only has enough water for us to alternate the crops that are irrigated, every few days. People fight over watering rights.”

The Samo Alto school collects rainwater and recycles water after different uses. “The water is then sent to a double filter,” he explained, pointing out that they have a pond that holds 5,000 liters.

The monthly water bill is much lower, but Santander believes that the most important thing “is the awareness it has generated in the children.”

“There used to be water here, and the adults’ habits come from back then. The students help raise awareness in their families. We want the environmental dimension to be a tool for life,” he said.

For Admalén Flores, a 13-year-old student, “the tomatoes you harvest are tastier and better,” while Alexandra Honores, also 13, said “my grandfather now reuses water.”

El Guindo primary school, located 10 kilometers from the city of Ovalle, the municipal seat, in a town known as a hotspot for drug sales, performed poorly in tests until three years ago.

At that time, the principal, Patricio Bórquez, and the science teacher, Gisela Jaime, launched a process of greywater recovery. They also planted trees and native species of plants to adapt to the dry environment of the municipality of 111,000 inhabitants, located about 400 kilometers north of Santiago.

Four students, ages 13 and 14, talk to IPS about how the water reuse project has made them aware of the importance of taking care of water in the semi-arid territory where they live, in a classroom at the rural school of El Guindo, in the municipality of Ovalle, Chile. Credit: Orlando Milesi/IPS

“The project was born because there was no vegetation,” said the teacher. Today they recover 8,000 litres of water a month. “Teaching care for the environment provides a life skill,” said Bórquez.

“Our school had the stigma of being in a place rife with drug addiction. Today in Ovalle we are known as the school with the most programs. We placed third in science,” she said.

Jaime described the experience as “gratifying” because it has offered “tools to grow and create awareness among children and the entire community about the importance of caring for water and other resources.”

Geographer Nicolás Schneider, founder of the “Un Alto en el Desierto” Foundation, told IPS that his non-governmental organisation estimates that one million litres of greywater have been recovered after eight years of work with rural schools in Ovalle.

In this arid municipality with variable rainfall, “only 37.6 mm of rainwater fell in 2018 – well below the normal average for the 1981-2010 period of 105.9 mm,” Catalina Cortés, an expert with Chile’s meteorology institute, told IPS from Santiago.

Schneider describes the water situation as critical in the Coquimbo region, which is on the southern border of the Atacama Desert and where 90 percent of the territory is eroded and degraded.

“Due to climate change, it is raining less and less and when it does, the rainfall is very concentrated. Both the lack of rain and the concentration of rainfall cause serious damage to the local population,” she said.

With guidance from their teachers, students at the Ovalle polytechnic high school built a filtration system devised by Eduardo Leiva, a professor of chemistry and pharmacy at the Catholic University. The filter seeks to raise the technical standard with which greywater is purified. 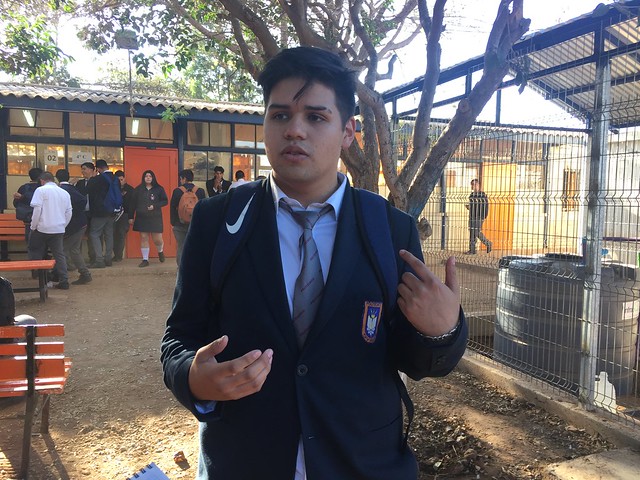 Duan Urqueta, 17, a fourth-year electronics student at the Ovalle polytechnic high school, describes the award-winning greywater filter he helped to build. Initially, units will be installed in eight rural schools in this municipality in northern Chile. Credit: Orlando Milesi/IPS

The prototype recycles the greywater from the bathrooms used by the 1,200 students at the polytechnic high school. This water is used to irrigate three areas with 48 different species of trees. Similar filters will be installed in eight rural schools in Ovalle.

The quality of the recovered water will improve due to the filter built thanks to a project by the Innovation Fund for Competitiveness of the regional government of Coquimbo, with the participation of the Catholic University, the “Un Alto en el Desierto” Foundation, and the Ovalle polytechnic high school.

The prototype was built by 18 students and eight teachers of mechanics, industrial assembly, electronics, electricity and technical drawing, and includes two 1,000-litre ponds.

The primary pond holds water piped from the bathroom sinks by gravity which is then pumped to a filter consisting of three columns measuring 0.35 meters high and 0.40 meters in diameter.

“The filter material in each column…can be activated charcoal, sand or gravel,” said Hernán Toro, the head teacher of industrial assembly.

Toro told IPS that “the prototype has a column with zeolite and two columns of activated charcoal. The columns are mounted on a metal structure 2.60 meters high.” 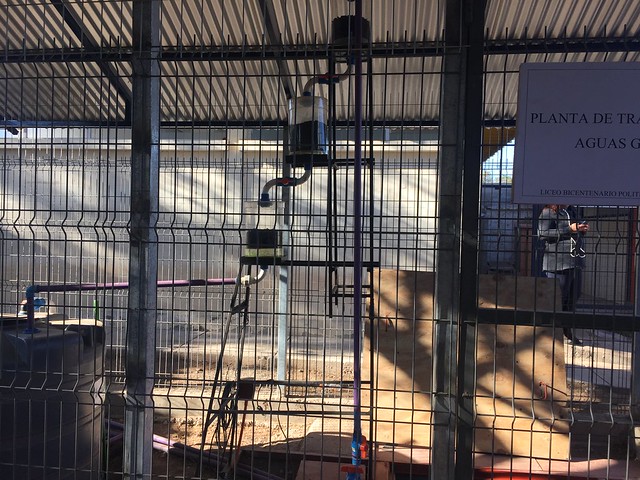 View of the water cleaning filter designed at the Ovalle polytechnic high school and built by a group of teachers and students with funding from the government of the region of Coquimbo, in northern Chile. Each unit costs 2,170 dollars and it will promote water recycling in the schools in the semi-arid municipality. Credit: Orlando Milesi/IPS

The water is pumped from the pond to the filter’s highest column, passes through the filter material and by gravity runs sequentially through the other columns. Finally, the water is piped into the secondary pond and by means of another electric pump it reaches the irrigation system.

Duan Urqueta, a 17-year-old electronics student, told IPS that they took soil and water samples in seven towns in Ovalle and “we used the worst water to test the filter that is made here at the high school with recyclable materials.”

In 2018, “we won first place with the filter at the Science Fair in La Serena, the capital of the region of Coquimbo,” he said proudly.

Pablo Cortés, a 17-year-old student of industrial assembly, said the project “changed me as a person.”

Toro said the experience “has been enriching and has had a strong social impact. We are sowing the seeds of ecological awareness in the students.”

“It’s a programme that offers learning, service, and assistance to the community. Everyone learns. We have seen people moved to the point of tears in their local communities,” the teacher said.

Now they are going to include solar panels in the project, which will cut energy costs, while they already have an automation system to discharge water, which legally can only be stored for a short time.

Eight schools, including the ones in Samo Alto and El Guindo, are waiting for the new filters, which cost 2,170 dollars per unit.

Schneider believes, however, that at the macro level “water recycling is insufficient” to combat the lack of water in this semi-arid zone. And he goes further, saying “there is an absence of instruments for territorial planning or management of watersheds.”

“Under the current water regulatory framework, the export agribusiness, mainly of fruit, has taken over the valleys, concentrating water use…and the government turns a blind eye,” he complained.